To help introduce students to organic nomenclature in a way that clearly summarizes the patterns that exist in the IUPAC system, a series of paper tools were developed. The paper tool in this activity can be used to introduce the IUPAC naming of major classes of organic compounds. These paper tools are easy to print and distribute to every student each semester. Click here for Part 1.

30 minutes or so to introduce and practice using this paper tool.

As a follow-up to my first activity- using a paper tool to introduce the patterns of IUPAC nomenclature for hydrocarbons- this paper tool expands the nomenclature to include most of the major organic functional groups. Organic nomenclature is usually taught as part of any introduction to organic chemistry. The details taught often vary, but most students are introduced to simple hydrocarbons first, followed by other functional groups. The IUPAC rules for naming are often covered quickly, and students sometimes become overwhelmed by the details and struggle to recognize the simple patterns in the naming system. To help introduce students to organic nomenclature in a way that clearly summarizes the patterns that exist, I designed a series of paper tools for naming hydrocarbons, major functional groups, and common names of certain classes of organic compounds. These paper tools are easy to print and distribute to every student each semester and students can easily put them in their folder or book. Both PDF and Word documents are available to allow for easy modifications to be made to match the types of compounds covered in a particular course. While the details like numbering or branching are not shown in this paper tool, it gives a starting place for students to see the general patterns of the changing suffixes for the IUPAC naming system. This tool can be used as functional groups are studied throughout a semester or as an overall introduction in one class period.

A majority of the students surveyed after using these paper tools indicated the tools helped them understand relationships between structures and names. While most students indicated that they find them helpful when they first begin naming organic molecules, some students continue to use these tools as a reference while studying.

Print one copy of both pages of the Organic Functional Groups IUPAC Paper Tool for every two students. For best results, choose "actual size" when printing on medium cardstock. These can be separated into single tools in advance using a paper trimmer or students can cut them with scissors. They may need to be trimmed slightly depending on the printing to make sure they line up correctly. They can be assembled according to the photo in Figure 1 (below) with one staple in the center (location marked in red on the image) to hold it together while still allowing each side to slide easily. 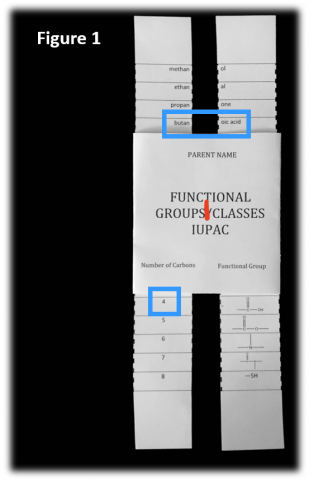 To use this paper tool, first slide the left side insert to show the correct number of carbons in the continuous chain just below "Number of Carbons." In Figure 1 above, the example is "four" carbons (blue square). Slide the right side to show the correct image of the major functional group present just below "Functional Group". In Figure 1, the example is a carboxylic acid group. The name of the indicated chain is just above "PARENT NAME" (blue rectangle). The example in Figure 1 has the "PARENT NAME" "butanoic acid". 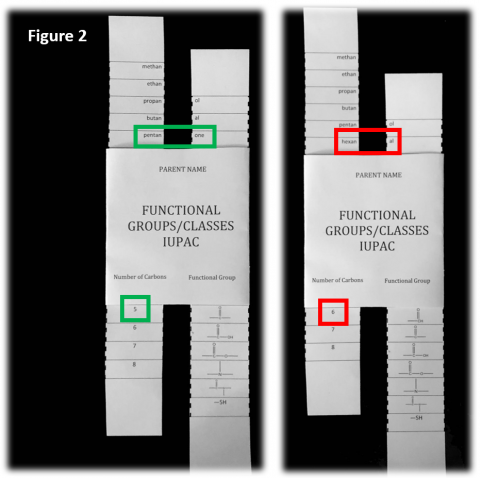 Practice: A sample page of structures is provided to practice using the paper tool to name a series of compounds with different functional groups. File = IUPAC Functional Groups Naming Practice

This tool can be used as common organic functional groups are studied or as an overall introduction in one class period.