I have long felt that teaching directly to the test is not the best way to approach education. Therefore I often include topics in my AP Chemistry classes that are not directly tested on the exam. More complex topics often help my students with building their grasp of fundamental ideas and leads to a better ability to understand simple and complex theories. With the new test structure that is being introduced I think it is important to put an emphasis on explaining phenomena and why they happen. With this in mind I have a lesson that I have used for many years that not only requires students to explain a topic that they have not been directly taught but also to develop explanations based on previous knowledge. I have used this lesson as a multiday “in-class” assignment and also as an “at-home” independent study. It works well in both scenarios with only minor revision. The lesson is based on Alfred Werner’s work on deducing the structures of coordination compounds.

Editor’s Note: This activity was originally published in 2014 but is being repromoted for those seeking virtual friendly lessons during the 2020 pandemic.

Typically the lesson (see Coordination Compounds: Independent Study 1) is placed near the end of the second semester or possibly as a nice “Post AP Exam” activity. It does require students to have an exposure to bonding and a little background in the structure of isomers is helpful. A modest understanding of solubility rules and precipitation reactions is also necessary. On the first day of the unit, I present students with the following information and ask them to propose structures for the compounds that is consistent with the experimental evidence shown and that do not violate any of the rules of bonding they have previously learned. The information they receive is:

"The purpose of this unit is to acquaint you, the student, with some research observations and to involve you in the discovery learning process. You will be given a topic to work on and some guidelines for what you should accomplish. You will work in groups and discuss your theories with the other members of your group.

“The problem you will be studying is a classic example of molecular structure research in chemistry, the structure of a coordination compound. This work led to the first Nobel Prize awarded to an inorganic chemist Alfred Werner.

“The following scientific facts about the compounds of cobalt listed below are well proven and accepted. The overall goal you have is to derive a structure for the three (four?) different compounds that agree with the data. In the process you will learn many new terms but you will also review many ideas you have previously studied to adapt them to the new subject matter.

“The formulas of the compounds are:

“In addition the following reactions regarding ionic solutions of the compounds are known:

I start the lesson by letting my students form groups of 3-4 students each. I ask them to read the description of the compounds and try to draw (or build models) of what they think the molecules look like. They must then show me their “guesses” and we discuss them.

According to Sophus Mads Jorgensen’s Chain Theory the structure in figure 1 represents the first compound. This idea emphasizes that the chain of ammonias in the center can be made longer or shorter to account for the different number of ammonias in the different compounds. In these structures all of the bonds appear to be covalent and nitrogen is bonded to five different species in violation of the octet rule. This is not possible with nitrogen only being in period 2 of the periodic table and not having d-orbitals available.

Figure 1: Co(NH3)6Cl3 as proposed by Jorgensen. This type of structure was referred to as the Chain Theory.

Alfred Werner was a Swiss chemist at the University of Zurich in the late 19th and early 20th century. He proposed a series of structures that revolutionized our ideas about inorganic compounds and eventually won the first Nobel Prize (1913) awarded for the field of inorganic chemistry. Figure 2 shows his proposed structure for the first compound. This structure emphasizes that the cobalt ion is in the middle of an octahedral complex with the ammonias bonded to the cobalt via a coordinate covalent bond that utilizes the lone pair on the nitrogens. The overall complex ion has a charge of +3 and the three chloride ions are attracted to it ionically. The ammonias are referred to as ligands and the chlorides as counter ions. Since the chlorides are attracted ionically they readily ionize in water and when AgNO3 is added they can form precipitates with the silver ion. The second compound (Figure 3) has one less ammonia than the first. One of the chlorides moves into the complex ion portion and the overall charge of the complex drops to 2+. Since only two chlorides are now bonded ionically to the complex only two parts of AgCl form in the precipitation reactions. The third chloride is now bonded covalently to the cobalt and will not dissociate when it is placed in aqueous solution. The third and fourth structures (Figures 4 and 5) both contain two chlorides in the complex and only one chloride as a counter ion. Since there are two chlorides in the complex both cis and trans isomers can exist. This accounts for the two different colored compounds that are known to exist with the same chemical formula. 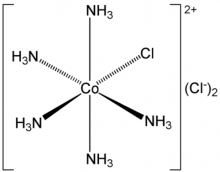 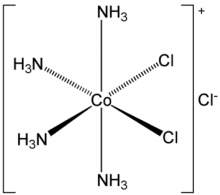 Figure 4: Coordination compound structure for Co(NH3)6Cl3 as proposed by Alfred Werner. This is the trans isomer.

When I start speaking with the students on day one of the unit they come up with a variety of very creative and mostly wrong structures. If they start to look at their textbook the chain theory appears first. Many will show it to me because it appears in their textbook about one page before the correct structures. Having seen an illustration of the compound they immediately copy it and propose the structure to me without reading the explanation that accompanies it. I point out to them that the nitrogen atoms have 10 electrons surrounding them and that this is not possible for nitrogen. I also show them that the chlorines are bonded covalently rather than ionically and cannot ionize and produce the AgCl precipitate. I have the students go back into their groups and start thinking of new possibilities based on what we just discussed.

After spending a day working through these and showing me their ideas I find that not many students will come up with the complex ion explanation unless they are directly consulting their textbooks. I am especially looking for them to “understand” the ionic nature of the counter ion versus the covalent nature of the ligand. Stereochemistry and isomers is something we have previously studied in class and they should catch on to the different colors of the last two compounds eventually. This day is one of the best days of the year I have for student teacher interaction, albeit most of the interaction is spent explaining why their guesses are wrong.

The second day involves a trip to our computer lab to use some Journal of Chemical Education Software packages. I have students work through Bonding and the Werner/Jorgensen Controversy programs from the issues of JCE Software. (Editor's Note - These simulations have been freely available during the COVID-19 pandemic but they may return to "subscriber only access" at some point in the future.) These two programs provide students with a beautiful description of the chemistry involved and give most students all the background they need to explain the problem in detail. Again I experience students running up to me before they have finished the simulations and showing me incorrect explanations. By the end of the day most of the students have a decent understanding of the structures.

The third day is spent looking up definitions for many of the words relevant to this chapter. It is not an exciting day but it does start to tie many ideas together and is successful in what I intend it to accomplish. I am always surprised by just how much some students will retrieve on this day. It is a great group activity and provides for lots of student-to-student interaction. I sometimes switch and put this on the second day to see if just reviewing the terms helps to get students pointed in the right direction.

The fourth day is more of a traditional teacher led day looking at the rules of nomenclature for coordination compounds and complex ions. I have tried with very little success to make this a completely independent study. At least one of the days is usually spent in direct instruction. A good programmed review of this nomenclature material via Computer Based Instruction is something I have pondered working on but as of now I have not found or written a program to accomplish it.

For the next day I assign some typical book problems and spend a day going over them and allowing students to present any interesting tidbits they have come up with on their own to the entire class.

For lab work I have an experiment (see Complex Ions Lab 2) where the students start with copper sulfate solution and react it with a series of reagents to first form a copper hydroxide precipitate, then dissolve it with excess base forming a complex ion. They then add acid to it and convert it back to a copper hydroxide precipitate. This is then dissolved into excess acid returning it to the copper sulfate. During each of the steps color changes very clearly show the formation of the new species.

My test for this unit includes some information about nomenclature, identifying complex ions versus coordination compounds, and always a question just like the first one presented in the lesson. I will give them lab data and observations about a compound and let them propose a structure for it.

The author gratefully acknowledges the assistance of Daniel Rabinovich of UNCC with the graphics for this article. The Mole Concept with Krystle Moos