The Interface of Art and Science

Toward the end of the school year we inevitably have disruptions to our normal instructional day. On one day in May, our classes were shortened to only fifteen minutes to accommodate for a series of school wide exams. On this day, I decided to choose some of my favorite chemistry-themed YouTube videos and share them with my students. By far, the most popular was "Psychedelic Science":

The art displayed in this video inspired several of my students. One of my advanced students even researched how to make ferrofluid and succeeded in producing about 200 mL of the magnetic liquid. He plans on trying to produce pictures similar to the ones shown in the video.

The interface of art and science was a popular theme in my local section of ACS this year. The ACS sponsored several talks on the subject and they were some of the most well attended events we sponsored. Daniel Gurnon spoke at the fall meeting at the High School Day event where he shared the research he is conducting at DePauw University. Dr. Gurnon’s projects include developing new ways to visualize and communicate ideas about the molecular world. His lab recently collaborated with artist Julian Voss-Andreae, DePauw art professor Jacob Stanley, and the Klaus Schulten lab create a large sculpture of a protein.

Dr. Gregory Smith of the Indianapolis Museum of Art spoke this spring regarding his work restoring Van Gogh’s painting “Undergrowth with Two Figures”. Dr. Smith led the lecture attendees through how he pieced together different clues from letters and other documents Van Gogh had written describing his painting, and how the description didn’t match up with the painting as it appears now. Through analysis of the paint used, the restoration team determined the colors of the painting had changed over time and are working on ways to restore the image to that of Van Gogh’s original.

Talking about chemistry in the context of art has made the science more accessible to several of my students. They could see how the subject matter could extend beyond medicine and research and have applications they had never considered.

Have you done any science-art projects in your classroom? Share your favorites in the comments! 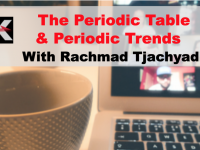