The structure and motion of matter (SAMM) survey is a 15-minute, open-ended formative assessment tool that probes how students think about the structure and dynamics of a gaseous mixture. It has been tested in middle school, high school, and university chemistry classes, in both English and Spanish. The SAMM survey presents three scenarios that involve a perfume or other scented volatile substance being released on one side of a room and detected by a nose on the other side of the room. Students are asked to draw how the perfume and air molecules behave, and explain in writing both the molecules’ behavior and why they behave this way. The survey can be downloaded below in color but it usually is provided to students printed in grayscale. Resources for teachers and science education researchers include a scoring guide (for manual scoring), and a programmed Excel sheet (Windows only) for computer-aid scoring of students’ responses. Sample data sets and a norming practice guide will also be available soon. More information about what can be learned in using the SAMM survey with students can be found in this brief summary of research findings from several studies we have carried out using the SAMM survey.

The SAMM survey is © 2010 by Marilyne Stains and Hannah Sevian. Science teachers who wish to use it for teaching have permission to do so if they acknowledge the authors and comply with the fair use of this copyrighted and registered work. Likewise, science education researchers have permission to use the SAMM survey if they comply with fair use, acknowledge the authors, and cite the article listed below. 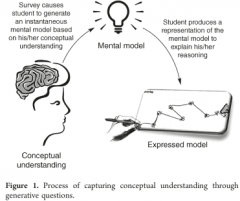 Assessing Secondary and College Students' Implicit Assumptions about the Particulate Nature of Matter: Development and Validation of the Structure of Motion and Matter - In this paper, the research-based process of developing the survey is described. Figure 1 from the paper, shown here, describes the process of capturing students’ thinking. Four independent variables are able to be measured by the SAMM survey, and a student’s chemical thinking in each of these can be characterized by the underlying assumptions that are both guiding and constraining the student’s reasoning:

Implicit assumptions in a learning progression about the structure and motion of matter - In this book chapter (which we can send to teachers or researchers upon request by email), we described each of the implicit assumptions along the four progress variables above that can be measured by the SAMM survey. We found that most assumptions are present in populations of students at every educational level from grade 8 through undergraduate completion. Generally, students grow to rely on more conceptually sophisticated assumptions as their training in chemistry increases. The curriculum used can greatly influence how students reason. For example, in the population we studied, grade 8 students were learning for one-third of the year from a curriculum that emphasized molecules and the particle nature of matter, while the high school curriculum focused on more quantitative descriptions of matter (e.g., stoichiometry, gas laws). Grade 8 students tended to rely on more sophisticated assumptions than most high school and even many university students.

Students’ mental models about diffusion in a gaseous mixture - This paper describes five mental models students hold about the phenomenon of diffusion in a gaseous mixture. These were determined by cluster analysis of the implicit assumptions characterized using the SAMM survey with a large set of data collected from students in grade 8 through undergraduate education in sciences. (Please email us if you’d like to receive a copy of the paper.) The mental models are:

Comparison of learning in two context-based university chemistry classes - In this study, students enrolled in two large university chemistry courses learned about kinetic molecular theory in different context-based learning environments. In one course, a second-semester general chemistry course, students learned through a whole-class kinesthetic activity as a large human model of a gas while focusing on a problem of differing weights of balloons at the same temperature and pressure filled to the same size with different gaseous substances. In the other course, a first-semester general chemistry course, students manipulated molecular dynamics simulations while focusing on the problem of separating CO2 from the atmosphere in order to reduce the causes of anthropogenic climate change. The SAMM survey was used as one measure to examine how students’ ways of thinking about matter structure and dynamics changed in the two contexts, and the extent to which each context influenced students’ transfer of learning about matter structure and dynamics. We found that students in the kinesthetic activity context increased in sophistication of assumptions about particle trajectories, while students in the molecular dynamics context developed more sophisticated mechanistic reasoning and understanding of particle trajectories. Students in the molecular dynamics context also gained more fluidity in the use of scientific vocabulary. 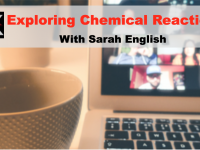