The What Makes Volcanoes Erupt? formative assessment (FA) asks students to draw and write what causes volcanoes to explode and then choose from three options of movement in Earth’s mantle to select the one that showed convection currents accurately. This FA targets chemical mechanism, which focuses on how different processes occur. The FA focuses on how volcanic eruptions occur and helps to uncover students prior knowledge of plate tectonics.

In the FA task, students use the

What makes a volcano erupt handout and watch a Youtube video of Mt. Kilauea erupting to guide their activity. While watching the video students are asked to draw on the handout what they think is happening underneath the volcano to cause the eruption–each student is required to complete their own handout, however, students are encouraged to discuss the prompts and work through the questions collaboratively. Additionally, the students are given three examples of movement in Earth’s mantle and select the one that showed convection currents accurately. Students were instructed to explain their selection.

This FA task was tested with 7th grade general science students on the first day of an Earth science unit. The school where this FA was implemented is a Spanish-English dual language school. In the class in which it was tested, the students had not yet been instructed about Earth science as the FA was intended to determine what Earth science knowledge students were bringing with them into the unit. This activity was done in a classroom with 28 students–students are all highly proficient in English in at least at ELD level 5.

Overall, this formative assessment was useful at providing me with information about what student prior knowledge of plate tectonics and convection currents was. This allowed me to gauge how much instruction students needed on these topics. However, I think this FA would have been more useful a few class periods into the Earth science unit–the FA responses were overly simplistic. I think this was because the students did not have any theories around this topic. Later in the unit, I would have been about to evaluate what students were taking away from the lessons thus far.

Despite the simplistic answers, they did still show some significant understanding of key points. For example, the question on the back of the test showed that students knew that the Earth’s core was hot. Prior to this FA I did not know if students had this fundamental understanding. Students were about to distinguish between choice A and C–this indicates that the students understood that the thermal energy driving volcanoes comes from inside Earth rather than outside Earth.

From prior years in science class, students were likely exposed to diagrams of Earth’s layers. Perhaps students had to memorize those layers. Yet students clearly never had to think about the implications of Earth’s structure–they have never discussed that Earth’s structure results in a dynamic Earth whose surface is always creating and destroying. Perhaps it would be important to begin the Earth Science unit by making explicit that Earth’s crust is cooled down mantle. 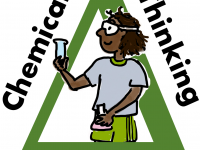 Would you like to offer a Chemistry Professional Learning experience this school year?