Hello from the US-Mexico Border

Scott Donnelly, ChemEd X Two Year College (TYC) editor and chemistry professor at Arizona Western College (AWC) in Yuma, recently recruited me to be a TYC lead contributor to ChemEd Xchange. I want to take this first opportunity to introduce myself, tell a bit about the institution at which I teach, and finally to offer a brief commentary about what I have observed so far in teaching science.

My PhD is in chemistry, more specifically biochemistry. Currently my appointment is clinical professor at the Northern Arizona University-Yuma (NAU-Yuma) campus. I teach upper division biochemistry (1-semester), genetics, cell and molecular biology, and their associated labs in addition to supervising undergraduate research and fieldwork experience.

Located in the far southwest border region of Arizona a short distance from both the international and state borders of Mexico and California respectively, NAU-Yuma is a transfer university and federally designated Hispanic Serving Institution (HSI) that shares the same campus as AWC, the community college for Yuma and La Paz counties, an area encompassing a combined 10,000mi2. NAU-Yuma students are from the Yuma area (namely recent graduates of AWC) as well as neighboring Imperial county (in California), and from the Mexican border cities of San Luis Rio Colorado (20 miles south of Yuma) and Mexicali (60 miles west of Yuma). Since Scott is at AWC and NAU-Yuma is physically located on the same campus as AWC, we collaborate a lot and have weekly, if not daily, discussions about science education in general and chemistry education in particular.

Scott recruited me as a TYC lead contributor for two reasons. First, as a university faculty I'm the other bookend of the high school-to-community college-to-university student pathway. Second, Scott is less a chemistry educator but more so a science educator. Yes, he teaches chemistry (and is educated as a chemist) but he also makes a concerted effort to bring in other sciences into teaching chemistry. As he oftentimes says (paraphrased), "Chemists always talk about how chemistry is the central science. Well, then we need to show that indeed this is the case.There's no reason why photosynthesis should be taught exclusively in a biology class. It's chemistry, plain and simple." My background in genetics and cellular/molecular biology perhaps will offer different perspectives in teaching chemistry.

I would imagine that higher education in the Yuma area is a bit unique compared to most of the country. Although all three state public universities- Arizona State University, Northern Arizona University, and the University of Arizona- have a presence to some extent in Yuma, neither offers a stand alone 4-year university program. Rather, what each university has is a 2+2 program structure (i.e. 2 years at AWC for 100- and 200-level courses (totaling 60+ transfer credits) followed by 2 years at the university for the 300- and 400-level course work).

NAU-Yuma 300- and 400-level science courses are capped at 24 students. Hence I can easily get to know students quite well and in the process mentor them in their educational journey. AWC and NAU-Yuma have similar challenges. Many students are English as a Second Language (ESL) students- with a number of them having actually completed all their primary and secondary schooling in the US. Unlike NAU-Yuma AWC, like most community colleges, has an open admission policy. What this translates into is that students may take several years completing remedial coursework, or may end up in a class they are unprepared for- such as chemistry.

I taught fundamental chemistry (introductory chemistry for non-majors) for two years at AWC before moving to NAU-Yuma. My first observation of the typical intro chem student was that they would put mental barriers or blinders on immediately upon entering the class. Just the word chemistry would make them sweat, get nervous. It seemed like they dreaded the class even before it started. Many really didn’t struggle with a concept per se but more so with having to utilize math in a non-math course. Proportional reasoning and unit cancellation stand out. Perhaps many had a bad experience previously, either in another college course, or possibly in high school that forced them to believe they could not adequately do math and/or science even though they could eventually figure things out if pushed and nudged a bit. Many seemed scared to be challenged and to learn from failure in trying to work something out. They would prefer to not even try which would guarantee a sub-par grade.

That is not to say that the science majors here don’t have their own challenges. In the next post I will talk about the chemistry experience on the upper division side.

Giving "The Talk" to Your Students

Chemistry Online- Why not? Or why bother? 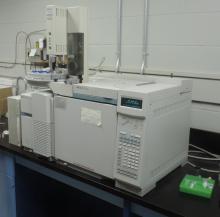 Learning to Walk Before Running a Marathon