The illness produced by the spread of COVID-19 in human populations has previously been modeled by chemical demonstrations involving the iron oxide-catalyzed decomposition of hydrogen peroxide to produce oxygen gas foam and the addition of Mentos candies to Diet Coke to produce carbon dioxide gas foam. The purpose of those demonstrations was to illustrate “flattening the curve” by social distancing.

In response to the current global COVID-19 pandemic, we developed two chemistry demonstrations to illustrate “flattening the curve” by social distancing.1-3 In the first demonstration, iron oxide rust was used to catalytically decompose soapy hydrogen peroxide4 into water and oxygen gas, which produced a foam.

More Mentos represented a greater number of social gatherings. More candies added to a bottle of Diet Coke produced more foam in a shorter period of time. Both of these demonstrations served to illustrate the role of social distancing in the battle against COVID-19. With vaccines finally entering this battle, we found it worth revisiting these demonstrations to see how they could represent the impact of this public health protection strategy. Vaccines and related strategies have been in use for hundreds of years,7 but are still being viewed with skepticism. These demonstrations do not demonstrate the mechanisms of vaccines themselves, but are rather analogies to their potential effect on a population. In these analogies, gas production still represents illness, but this time people are represented by objects added to the solutions which either enable gas production (unvaccinated individuals) or do not enable gas production (vaccinated individuals).

A successful demonstration was run using the following materials: 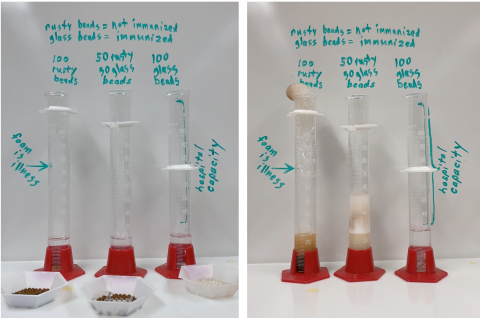 See Video 1 for a time-lapse movie of this experiment:

A successful demonstration was also run using the following materials:

For the demonstration used in the video below, the cap was removed from the 500 mL bottle of Diet Coke, and a launch tube containing two Junior Mints candies was added. The trigger was pulled and the Junior Mints fell into the soda. Some carbon dioxide bubbles rose, but not near enough to create a soda geyser out of the tube. When this small amount of bubbling subsided, the emptied launch tube was replaced with a new launch tube containing one Junior Mints and one Mentos candy. The trigger was pulled and the candies fell into the soda. This time, carbon dioxide foam was produced which rose up and out of the launch tube.

See Video 2 for a movie of this experiment:

"it was suggested that the demonstrations could be shown to students with a minimum of explanations, and then the students could be prompted to describe, with guidance, the strengths and limitations of these analogies."

Both of the demonstrations presented here attempt to use a chemical system to model, with limitations, human interactions and the spread of illness. The demonstrations are based on the similarity between the chemical kinetics principle that more reactive species produce a greater chemical reaction rate, and the idea that fewer protective measures in a population subjected to infectious disease will produce more illness. In the case of COVID-19, these protective measures not only include vaccination, but also mask-wearing and social distancing. In our previous write-up on this topic,3 it was suggested that the demonstrations could be shown to students with a minimum of explanations, and then the students could be prompted to describe, with guidance, the strengths and limitations of these analogies. This pedagogy would apply to these demonstrations as well.

In the hydrogen peroxide demonstration, the rusty iron BBs represent the unvaccinated portion of the population and the glass spheres represent the vaccinated portion of the population. The acidic soapy hydrogen peroxide solution represents exposure to COVID-19 and the foam represents illness. The graduated cylinders represent the capacity of the healthcare system to handle the illness. For 100 rusty spheres, the foam produced exceeds the capacity of the graduated cylinder, representing a population that is completely unprotected by vaccination that produces illness that exceeds the capacity of the healthcare system. For 50 rusty spheres and 50 glass spheres, the foam rises in the cylinder much more slowly, representing a population that is only partially protected by vaccination that still produces illness and does not exceed the capacity of the healthcare system. For 100 glass spheres, no foam is produced, representing a population that is completely protected by vaccination and therefore does not produce illness. A variation of this demonstration can also be performed in a sequential manner with one graduated cylinder. The hydrogen peroxide, sulfuric acid, and dish soap are added to the cylinder as before, and then the glass beads are added. After a time of no foam production (even on the order of days), the rusty beads are added, and the foam rises up in the cylinder.

The analogy is very similar for the Diet Coke and Mentos experiment. The Mentos represent the unvaccinated portion of the population, whereas the Junior Mints represent the vaccinated portion of the population. The 500 mL Diet Coke represents exposure to COVID-19, and as above, the foam represents illness. The Mentos drop tube represents capacity of healthcare system to handle the illness. For two Junior Mints, typically only little foam is produced, representing a population that is largely protected by vaccination that does not produce much illness. For a Junior Mint and a Mentos candy added to the same bottle, more foam is produced, representing a population that is only partially protected by vaccination that produces sufficient illness to overwhelm the healthcare system for that population. Fortunately for this demonstration, Junior Mints (~2.6 g each) and Mentos (~2.8 g each) are similar in shape and size. The chocolate coating of the Junior Mints lacks the same ability of the Mentos to nucleate bubbles in carbonated solution. Mentos coated with spray paint will also resist bubble formation. Individually-wrapped Mentos float at the surface of the Diet Coke and cause little foaming, though they require the push of a pencil to get them through the Mentos drop tube, as shown in Video 3 below. Simply dropping the objects into carbonated solutions can produce bubbles, through tribonucleation.9 For example, six Junior Mints produced sufficient foam to come out of the Mentos launcher. However, the surfaces of Mentos produce bubbles at a much greater rate than most surfaces that are not Mentos.

Beyond the public health message associated with these demonstrations, there are chemical principles to be illustrated. For example, the objects added to the solution could be thought of as sites on the surface of a heterogeneous catalyst. Objects which promote bubbling represent catalytically active sites; objects which do not promote bubbling portray catalytically inactive sites. Objects that promote bubbling increase the rate of reaction, illustrating that more reactive sites are desirable for faster catalysts. Exchanging reactive objects for unreactive objects between demonstration trials is also reminiscent of poisoning a catalyst. If the unreactive objects are painted rusty BBs or painted Mentos the connection is perhaps even more obvious.

All reagent containers should be clearly labeled. Proper personal protective equipment such as goggles should be used, ESPECIALLY considering vertically rising foams can be produced. Avoid spilling reagents on clothing. Avoid skin contact and wear nitrile gloves while working with hydrogen peroxide. Always wash your hands after completing the demonstrations. A tray or plastic sheet can be placed under the demonstrations to help contain spilled materials.

This work was supported by Bradley University and the Mund-Lagowski Department of Chemistry and Biochemistry with additional support from the Illinois Heartland Section of the American Chemical Society and the Illinois Space Grant Consortium. We also thank Deanna Cullen and Tom Kuntzleman for their great suggestions and work on this article, which deals with a very important and time-sensitive issue.