The gas exchange formative assessment (FA) task asks students to interpret a representation to figure out the movement of atoms due to differences in concentration gradient. The FA targets chemical causality and chemical mechanism within the topic of diffusion of gases in respiration. It is ideally used at the beginning of a cardiopulmonary, cellular respiration, or related unit.

This formative assessment was originally created by Rebecca Lewis with input from Elizabeth Egan in response to 9th grade biology students’ answers on a test question about gas movement in alveoli. Many 9th graders used language to describe the movement of carbon dioxide and oxygen gases that implied they are dependent on each other, rather than due to a concentration gradient. This FA was designed to uncover student thinking, build understanding, and help students correct a writing assignment in which they answered a related question. In addition to testing this FA with 9th graders, Elizabeth used a version of the FA used with AP biology students, to learn about her students’ levels of understanding about gas exchange.

How the FA task was implemented

There are 3 pages in the

Gas Exchange Formative Assessment task  and they are given to students at different times during the FA activity. Here is how we implemented this FA activity.

Possible questions to ask students while talking with different student groups during the activity:

Reasoning behind the design of questions in the FA

Questions 5 and 6. "“What do you think the circles/triangles represent?” – Withholding the identity of the gases and allowing students to determine this based on context clues provides them with the opportunity to think about (and express their thinking about) the relationship between the two molecules and how the concentration of each is relevant.
Questions 7. “Which direction do you think the blood is flowing in?” – This pushes students to connect the direction of blood flow (what is at the highest concentration coming in? Going out?) to the movement of the molecules. Asking this question rather than telling them the direction reveals if the student’s level of understanding is at a level at which they can figure it out, and/or reveals what they think is important.
Questions 8. “If the boundary between structure 1 and 2 suddenly became impermeable to the circles, would the triangles be impacted in any way?” – This specifically targets the “gas exchange” concept. Can the students identify that the ability of the circles to pass will not influence that triangles ability to pass.

Examples of student work and teaching reflections on these

“Carbon dioxide goes out of the alveolus in order for the oxygen to go in”
Possible interpretation: The student thinks movement of oxygen into the capillary is dependent on carbon dioxide first leaving (this thinking may be influenced by the frequently used term “gas exchange”)

“Oxygen needs to go into the blood to get to the cells”
Possible interpretation: The student isn’t thinking about oxygen moving because of the properties of matter. 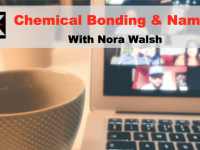