Last night I had the pleasure of sitting down with one of the teachers who took my workshop on Modeling Instruction™ last summer.  She is currently finishing up a Master’s degree in Education and working full time in an urban alternative charter school. We chatted about the different strategies she was using and how she has seen Modeling engage her students this school year.  She explained how her students loved to use whiteboarding to illustrate their thoughts and how, even though she doesn’t have a lab, she still tries to incorporate inquiry learning when she can.  Then she pointed out how much she liked “The Model So Far” and how the sequence of the curriculum tells a cohesive story of the particle theory of matter.

After we finished our discussion I started thinking about what she said.  I started thinking about how integral the storytelling was to the curricular choices I made in my classroom.  I realized that I had shared some of my experiences as a Modeler and a few of the activities we use in our classrooms, but I have never described the order of topics in detail. So, this blog is titled “The Model So Far…” I hope it gives you an idea of the journey we take each year as the students uncover evidence and construct models along the way.

What is “The Model So Far”?

According to the teacher notes for unit one in the chemistry modeling materials,

“The modeling approach requires students to create models to predict and explain the behavior of matter.  As more complex behaviors are observed, it stands to reason that changes in models must be made.  At the end of every unit, as a means of preparing for the test, students may review and refine the model they used to explain events observed throughout the unit.”

Throughout each unit, we are experimenting and observing – collecting data we will use to add to or change the model of matter we have constructed.  At the end of each unit, we review and synthesize what has been learned.  This activity informs the newly adapted model we will use moving forward. Some teachers use a handout called “The Model So Far” for students to keep these ideas organized throughout the year.  I have my students keep a digital version in their Google drive.

A breakdown of topics for each core unit is described below:

The following has been adapted from the teachers notes provided by the American Modeling Teacher’s Association (AMTA).

Unit 1:  The Physical Properties of Matter

In this unit we collect evidence to support the idea that matter is composed of particles.  We understand the particles have both mass and volume and that the particles can pack in different arrangements.  The arrangement of the particles determines the state of matter and the density of the substance.  Through experiments, we determine that mass (and particles) are not lost or gained even when the matter undergoes a change.  We also define the concepts of system and surroundings.

Unit 2:  Energy and States of Matter Part I

In this unit we gather evidence that the particles in matter can move.  In fact, they are in constant, random motion.   We also see that particles can interact with each other through collisions.  We define the concept of gas pressure in terms of collisions of the particles with surface of a container.  We determine the relationships between volume, temperature, and number of gas particles within a system.

Unit three provides us with evidence that particles can exert attractions on one another. We can now define energy as a conserved, substance-like quantity that can be transferred and has the ability to cause change.  We learn that energy is involved whenever there is a state change.  We discuss an idea called “phase account” as a means of describing how energy is stored in the arrangement/interactions of particles and “thermal account” to describe energy of motion.  We also investigate how energy can be transferred between system and surroundings.

Unit four is the first time we have evidence that particles can combine with other particles to make new substances we call compounds.  Until now, we have used single particles to represent atoms and molecules alike.  Now we can make a distinction between compounds, elements, and mixtures.  We also investigate the Laws of Definite Composition and Multiple Proportions.

In the fifth unit we use Avogadro’s Hypothesis to determine relative masses of atoms.  These ideas eventually lead students to the mole concept and molar masses for both elements and compounds.  Students can use this information to calculate things such as percent composition and empirical formulas.

In the sixth unit we finally discover there are things smaller than atoms!  We investigate the property of charge and use the Thomson model to account for the observations that two types of charge exit in an atom.  We study Thomson’s experiments to see that the negative charge is called an electron and is mobile.  We investigate the different ways in which atoms are held together in compounds and learn about ionic and molecular substances.  This is the unit where nomenclature is introduced.

Students explore chemical reactions in the seventh unit.  We learn that atoms are rearranged in chemical reactions and that these changes are associated with a change in energy either into or out of the system.  The Law of Conservation of Mass, introduced in unit one, is revisited as students learn to balance equations.  We also add a new way in which energy can be stored, the “chemical account” for energy is used to describe energy stored within molecules (bonds).

In unit eight students combine their findings from the previous units.  We learn how to use balanced equations to relate substances in a reaction.  In the laboratory, the model helps students by relating the number of molecules (or formula units) to weighable amounts of these particles.

In the last of the core units, we progress into more advanced stoichiometric calculations involving solutions and gases.

This is brief overview of how our models are developed and adapted in units one through six and then deployed in units seven through nine.  I hope this synopsis gives you a chance to reflect on the way in which you help students build meaning in your classrooms.  Have you ever considered rearranging how students progress through the content in your course?  Do you see value in presenting a connected storyline?  Please start the conversation in the comments below! 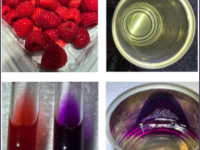