Welcome and thanks for reading! A year in the life of a bear is more or less equally divided into two parts- half the year it is eating (and eating, and eating) and the other half it is not eating because it is hibernating. Part 3 began discussion about the organic chemistry of the multi-step (4 distinct steps overall), enzyme-dependent degradation (catabolic) pathway known as the β (beta)-oxidation of saturated fatty acids. The chemical transformations of steps 2 and 3 (of 4) of this pathway are discussed in this post.

It is called β-oxidation because the β-carbon (C-3 or third atom of the fatty acid) is oxidized. This elegantly tuned, precisely organized pathway provides the metabolic energy to permit a bear to remain alive for 120+ consecutive days without having to eat (or drink) while hibernating. To circumvent winter's food shortage and to prevent dying from starvation and/or hypothermia, a hibernating bear "eats" itself, specifically its adipose fat reserves it spends the summer and early autumn months building up by feeding almost round the clock so as to satisfy its accelerated appetite that has kicked into overdrive. Oxidation of its fatty acid reserves eventually provides the metabolic energy in the form of ATP (STEP 4 leads into the Citrus Acid Cycle) and the internal heat from the reaction exothermicity to defy death.

The overall reaction pathway is summarized below. Part 3 listed foundational ochem topics that students should have in order to get the most educational 'bang-for-the-buck' from this activity. This post includes 'learning assessment questions' (my terminology, hence the single apostrophe marks) used to gauge students' understanding of the chemistry taking place and the chemistry of the molecules involved. You are free to use the questions as is or modify them. Please though practice conspicuous attribution if you use or modify the work that follows. Thanks as always.

Note: The side chain length and degree of saturation/unsaturation for the free fatty acids vary. The β-oxidation pathway discussed in this post deals with saturated, unbranched, even numbered carbon moieties (in this instance length = 16 carbons). STEP 1 begins with an unbranched, saturated fatty acyl-CoA where R = -(CH2)11CH3. 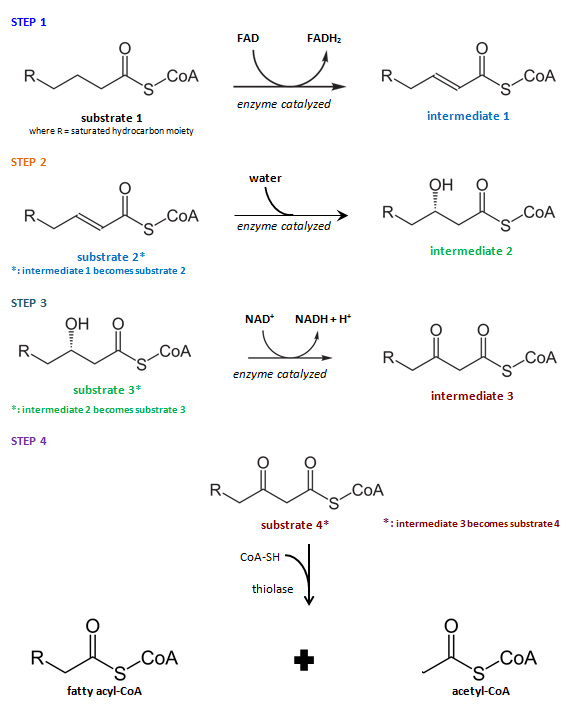 What follows is a series of questions (identified with Q) students answer (individually or in groups) with respect to STEPs 2 and 3. If used as a classroom activity I recommend the Think-Pair-Share-Report Out (TPSRO) strategy (see Part 3 for references) to promote increased student engagement (= 'theoretical buy in'). FYI- I don't mention to students that the reactions they are about to analyze are part of the β-oxidation of saturated fatty acids pathway. I don't tell them because I don't want them to look it up on Wikipedia or somewhere else. Rather I want them to look at the 'raw' reaction chemistry as is without the benefit of knowing where to find out more about it.

S2, Q1: Based on the information given, what is the molecular formula (= identity) for reactant C?

S2, Q3: Determine if the italicized statement below is TRUE or FALSE. If FALSE, then re-write the statement to be TRUE. IHD = Index of Hydrogen Deficiency (OChem students are expected to know what IHD means.)

ΔIHDreaction = -1, meaning that the product of the reaction is less unsaturated than the reactant. In the α,β-unsaturated substrate the α-carbon is reduced and the β-carbon is oxidized. The enzyme involved is a hydrolase. The α-vinylic hydrogen would appear as a doublet in 1H NMR. The substrate carbon in the thioester has a higher IR stretching frequency than the same carbon in the product (= intermediate 2).

S2, Q4: Offer a plausible reason for the use of an enzyme in STEP 2.

S3, Q1: The redox active moieties of the most reduced and most oxidized forms of the coenzyme prosthetic group involved in STEP 3 are shown below. One of the structures below is D and the other structure is E in the STEP 3 reaction. Based on the STEP 3 reaction chemistry shown, which choice below- (1) or (2)- is E in the reaction? R1 = identical in both forms 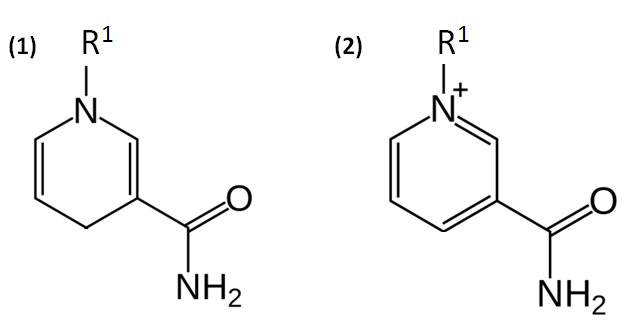 S3, Q2: Determine if the italicized statement below is TRUE or FALSE. If FALSE, then re-write the false statement(s) to be TRUE.

The chiral β-carbon (with S configuration) changes from being saturated, having sp3-hybridization and tetrahedral geometry to being achiral, unsaturated, having sp2-hybridization and trigonal planar geometry; the change in the ideal bond angle about the β-carbon equals -10.5o. The chiral secondary alcohol group in substrate 3 is oxidized to a ketone resulting in the formation of a β-keto thioester. The prosthetic group D is an oxidizing agent and hence an electron acceptor. D is reduced. ΔIHDreaction = -1. The enzyme required for this transformation is a dehydrogenase.

S3, Q3: How can a 1H decoupled-13C NMR analysis support the formation of the product in STEP 3? Offer a brief but thorough explanation using accurate spectroscopic terminology.

S2, Q1: reactant C = H2O; students should note that the product formed in STEP 2 (= intermediate 2 for the overall pathway) has had added to the α-carbon (C-2) a hydrogen atom and to the β-carbon (C-3) an -OH group. An enzyme is not consumed in a reaction.

ΔIHDreaction = -1 (TRUE), meaning that the product of the reaction is less unsaturated than the reactant (TRUE). In the α,β-unsaturated substrate the α-carbon is reduced (TRUE) and the β-carbon is oxidized (TRUE). The enzyme involved is a hydrolase (FALSE, enzyme is a hydratase). The α-vinylic hydrogen (TRUE) would appear as a doublet in 1H NMR (TRUE, assuming no meaningful coupling to the C-4 methylene hydrogens). The substrate carbon in the thioester (TRUE, this is the correct functional group) has a higher IR stretching frequency than the same carbon in the product (= intermediate 2) (FALSE, on account of conjugation of C=O with the alkene unit, the substrate's C=O stretching frequency is lower. Change higher to lower.).

S2, Q4: STEP 3 is both regio- and stereospecific with respect to product formation. It is regiospecific in that the hydroxyl group (-OH) is added specifically to the unsaturated β-(C-3) and not the α (= C-2)-carbon of the alkene unit of the fatty acid. It is stereospecific in that the -OH group is specifically the S and not the R enantiomer. An enzyme supported reaction gives 100% enantiomeric purity (also called % enantiomeric excess, %ee) whereas a non-enzymatic hydration of an alkene gives a mixture of two individually chiral products (in this specific reaction instance, both R and S enantiomers below) and hence an enantiomeric purity < 100% (in this reaction either S > R, R > S, or S = R = racemic mixture). Enantiomeric purity (or %ee) equals [(enantiomer 1 - enantiomer 2)/(enantiomer 1 + enantiomer 2)] x 100. Both an enzyme catalyzed and non-enzymatic hydration of the alkene results in addition of -OH to the β-carbon resulting in the same regiospecific chemistry. So the specific stereochemical attribute of the enzyme catalyzed hydration of the alkene (only one enantiomer is formed) is a plausible explanation for the requirement of an enzyme. And STEP 4 requires an enzyme as well and enzymes are designed to act on substrates with specific stereo-, regio-, and/or conformational attributes. So creating the wrong enantiomer in STEP 3 may prevent STEP 4 from happening.

The chiral β-carbon (with S configuration) (TRUE) changes from being saturated (TRUE), having sp3-hybridization (TRUE) and tetrahedral geometry (TRUE) to being achiral (TRUE), unsaturated (TRUE), having sp2-hybridization (TRUE) and trigonal planar geometry (TRUE); the change in the ideal bond angle about the β-carbon equals -10.5o (FALSE; 120o - 109.5o = +10.5o) The chiral (TRUE) secondary alcohol group (TRUE) in substrate 3 is oxidized (TRUE) to a ketone (TRUE) resulting in the formation of a β-keto thioester (TRUE). The prosthetic group D is an oxidizing agent and hence an electron acceptor (TRUE, TRUE). D is reduced (TRUE). ΔIHDreaction = -1 (FALSE; +1, the product (= intermediate 3) is more saturated than the reactant (= substrate 3)). The enzyme required for this transformation is a dehydrogenase (TRUE).

S3, Q3: For the STEP 3 reaction, the reactant and product have both similar and different 13C signals. It is the difference(s) that allow for validation of product formation. This is shown in the image below. Only signals relevant to the reaction or the fatty acid macrostructure are shown. The signals shown (single vertical bar) are arbitrarily positioned mid-range of the functional group's maximum/minimum predicted signal range. 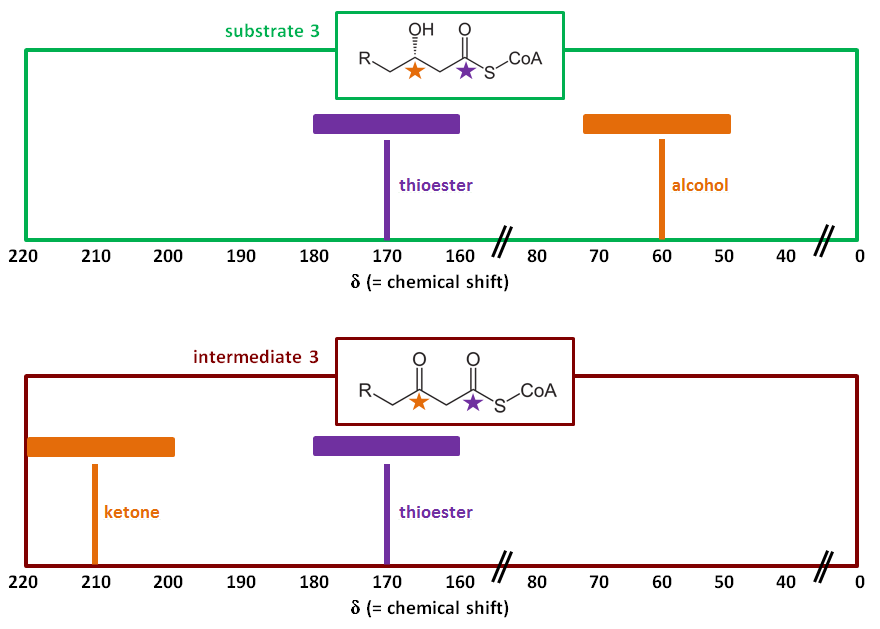 Part 5 will focus on STEP 4 and the completion of one full cycle of the β-oxidation pathway. STEP 4 results in the fatty acid chain length decreasing by two carbons and the two carbon moiety entering into the Citrus Acid Cycle where its oxidation and the energy released is coupled to the redox-driven electron transport chain and eventual production of energy-rich 'packets' of ATP.