Misconceptions and Struggles with Double Displacement reactions and dissolving... 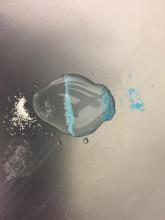 Some of the biggest misconceptions students hold on to in my course relate to how ionic substances dissolve in water. Thanks to a great experiment developed by Bob Worley it is simple to “probe” a student’s understanding (see “Puddle Chemistry” here) . Starting with a conductivity tester and a few simple ionic solids such as sodium chloride, sodium carbonate and copper(II)sulfate, students do some simple microscale experiments that involve testing the solids separately and together. Students “push” a few crystals in a “puddle” and test the conductivity. The “puddle” conducts. It did not before. They make models to try to describe their experience. I went a step further and incorporated “Atomsmith” (see blog here) so students could look at other models after they attempted to develop their own. Finally, students dropped the sodium carbonate and copper sulfate in opposite sides of the “puddle” and a precipitate formed in the middle. If you are logged in to your ChemEd X account, you can see the activity linked at the bottom of this post. The ultimate goal is that they can develop models and predict the outcome of simple double displacement reactions.

In theory, this should have worked. In reality, it only worked for some of the students and not all. After reflecting, here is what I would do differently.

First, students are dealing with some pretty big conceptual concepts: Dissolving ions, solubility, chemical reactions. My students are 16-18 year old kids that I have in class for 50 minutes a day. I should have introduced these concepts earlier on in smaller chunks and scaffolded them much more. Second, I should have known this if I had taken time to better understand and learn about my students. This is where formative assessment and the standards come in (check out some thoughts here).  Looking over my student's papers, there may have been more misconceptions created because of the way I planned the curriculum. In all of the experiments students can see and observe that not all of the crystals or material dissolves yet the water starts to conduct. In their minds there is evidence that they believe either something DOES dissolve or it does NOT. Clearly, partial dissolving is initially too much to consider.

So….where to go from here? First, understanding my students, their abilities and teaching accordingly is more important than getting to the last chapter.  People are always more important than test scores. Second, repeated baby steps are not a bad thing...start small and continue to build. Finally, scaffolding...there probably is a way to repeat these concepts in smaller chunks so it is not just a “one and done” activity.  Something tells me that I am not the first to wrestle with this….any thoughts??? If you log in to your free ChemEd X account, you can leave a comment below.