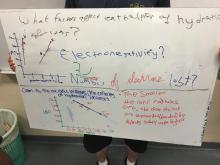 If you have read much of my past work here on ChemEd X, you know I am a big proponent of using Twitter for professional development. I owe many of my current teacher practices to my fellow chemistry teachers from around the world.

In December I got a Tweet from @Meachteach mentioning a book titled, "Argument-Driven Inquiry" and he reflected on his first experience using the book and the Claim Evidence Reasoning (CER) framework. Needless to say, I was intrigued. (Honest note: I haven't bought the book yet, but it's on my birthday Wish List!) But in reading through Ben's ideas, I was inspired to try using the CER framework with my own students. I have been looking for a way to add some depth to my students' lab experiences and this framework looked promising.

More recently, Ben published a detailed blog "Implementing the Claims, Evidence, Reasoning Framework in the Chemistry Classroom" about his use of the CER framework. That information sets up my own reflection in this post of using the framework for the past two months quite well.

I modified a gas laws lab I have used with the Vernier pressure sensors for a few years by adding some details to reflect the CER framework. The lab investigates four relationships: pressure and volume; pressure and temperature; volume and temperature; and pressure and number of molecules. Typically I assign separate groups to handle different tasks and then present their findings to the class. Two years ago my directions were pretty simplistic. "Be ready to present next class." Last year I went a bit further and created the following expectation:

After all the data is collected and the whiteboards have been written, we will have a “Board Meeting” where groups will share their results and their whiteboards. I will take pictures of all of the whiteboards and share them in the Topic 1 Google Drive Folder.

This certainly helped, as it created some good discussion. But what was lacking from this was an explanation of the relationship being studied. Therefore, based on idea I had learned from Ben, I modified the lab again to include the following Data Analysis:

Your “Claim” is essentially the conclusion based on your data.

Your “Evidence” is your data and a GRAPH of your data. You should also include an equation that models your system. [For example, write an equation using the two variables and a proportionality constant, k. (e.g., for Part I, P = kV if direct, or P = k/V if inverse.)]

Your “Reasoning” is an explanation of the evidence. Why is this relationship valid? Include some particle-level discussion and diagrams.

After all the data is collected and the whiteboards have been written, we will have a “Board Meeting” where groups will share their results and their whiteboards.

I will take pictures of all of the whiteboards and share them in the Topic 1 Google Drive Folder.

Unfortunately, I was absent at a conference when the "Board Meetings" would take place. So I had students video their meetings. Due to the privacy policy of my school, I am not able to share these videos. However, I will say they were informative. I learned a lot about how the students processed the ideas. But I wasn't there to push their thinking with questions. So I was looking for another venue for the CER framework.

In his ChemEd X blog post, Ben discusses the idea of when and how to use the CER Framework:

#2 - Is this only for lab reports or can I use this for homework, quizzes, tests, presentations, etc. too?

The answer to this can be whatever you want it to be. During my 1st year of implementation, I only used CER in the lab setting. I regret that decision because the nature of our content provides opportunities for students to practice and reflect on their scientific explanations pretty much daily. Adhering only to the lab setting may allow students to think that somehow their explanations of findings in the lab have a fundamentally different structure than the answers I ask them to provide on an assessment. This year, for the first time, I have started to incorporate CER into my quizzes, tests, labs, and homework.

I would like to respond directly to that idea, because the second attempt at CER did not involve a lab. We were in the middle of our Energetics unit (Topics 5 and 15 for the IB Syllabus). While studying enthalpy of hydration I normally present some data and ask students to draw a conclusion and "be ready to discuss next class" within my video lesson on enthalpy of hydration. I did that the same this year as I had done before. But instead of a standard class discussion, I organized my students into groups and had them work through the data using the CER framework. The question posed was, "What factors affect the enthalpy of hydration for ions?"

Below is the set of directions given:

What factors affect enthalpies of hydration for ions?

Use the data below to generate at least two claims relating to factors affecting enthalpies of hydration for ions.

Generate a Whiteboard with four sections:

Note that your evidence should include one or more graphs. You can create one whiteboard per claim, or put multiple claims on the same whiteboard.

Note: The data provided here comes from your textbook. Consider alternative sources of data for your graphs. (Translation: To be really effective at providing evidence, you will need data that is not provided here.

I won't go into the chemistry here, but the patterns are typically quite obvious to the students. The difference with this year's attempt at this discussion is the attention given to focused evidence that directly supports the claim(s) made and reasoning that links the evidence to the claim, providing a plausible "mechanism" (for lack of a better word) for the trend. In my mind, this is one of the great benefits of this framework: Evidence only works if it directly supports the claim. This forced my students to really evaluate the quality of their graphs (as you can see below). I can imagine that with more practice using this framework, their explanations will improve.

Below are some student-generated whiteboards. Since I wasn't present for the first attempt, as mentioned, I really considered these my first chance to give feedback on the spot to the students and actually modify any misconceptions. The discussions were quite robust, with students asking clarifying questions as well. I will admit, though, that by the last group we had heard just about all we could hear about the topic at this level and the activity stagnated a bit. I can only imagine that with the gas laws lab this would not have happened as there were four different relationships to discuss. 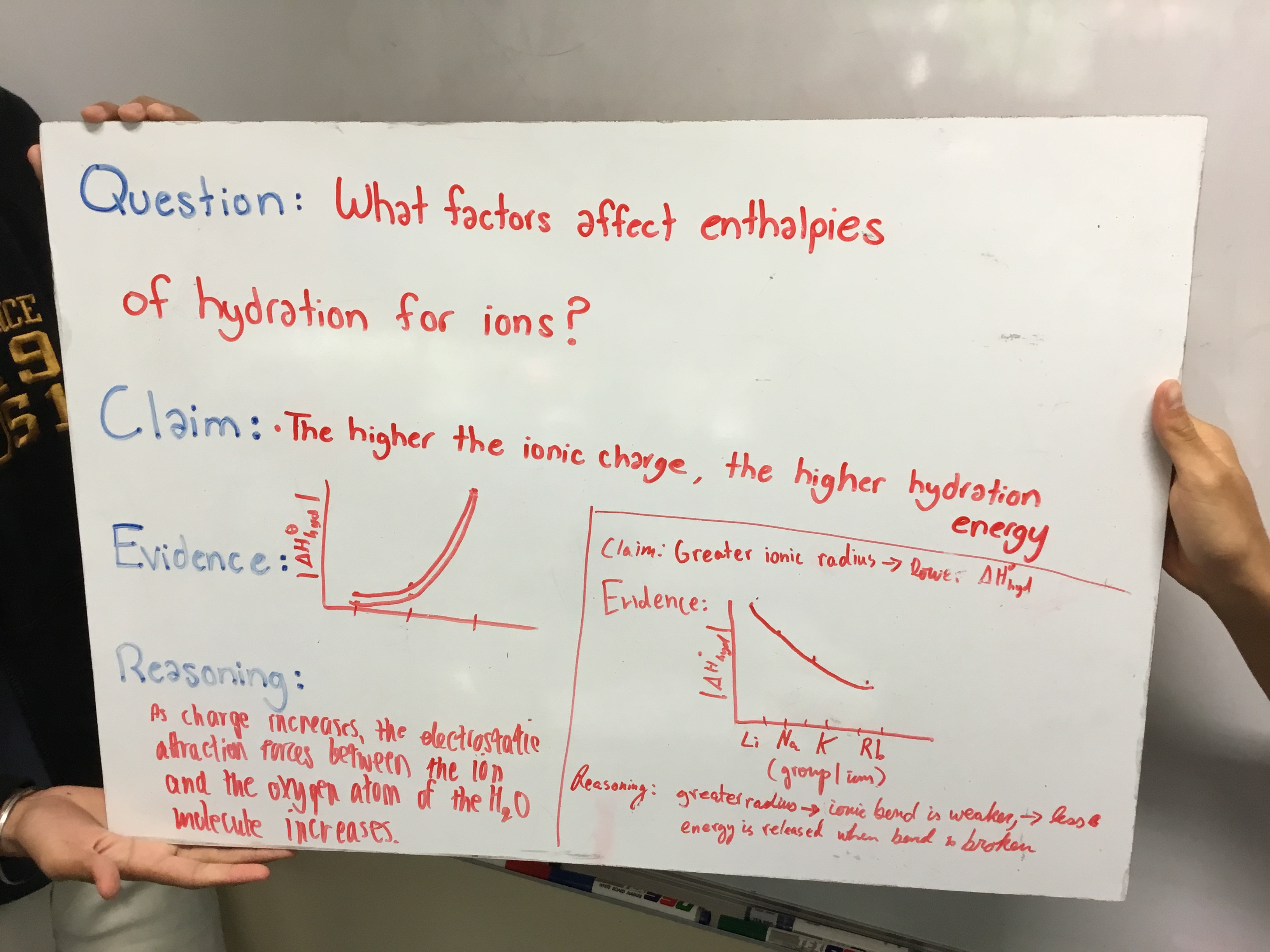 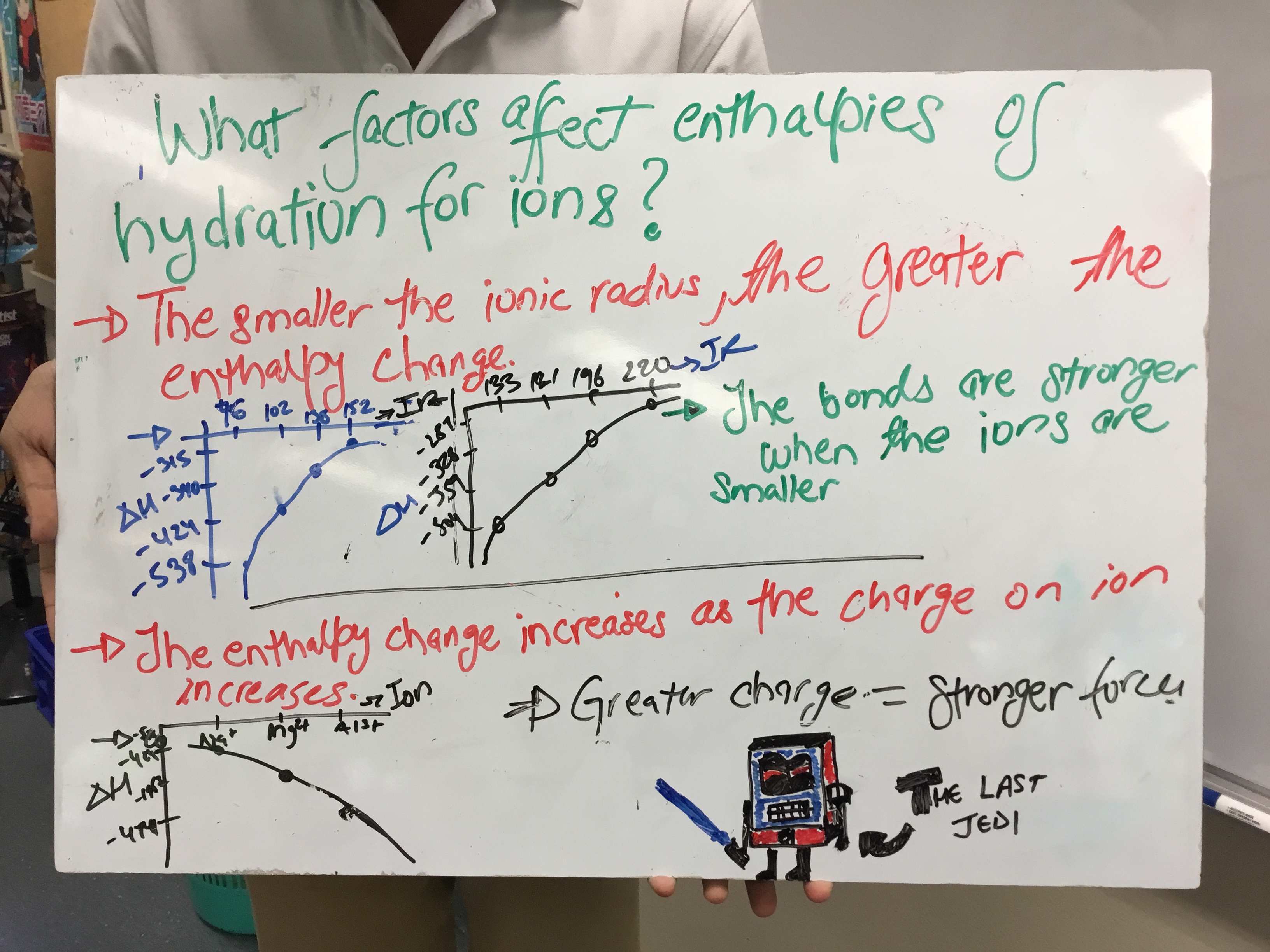 Just yesterday we were discussing a lab related to Hess's Law and evaluating an error associated with leaving solid sodium hydroxide on the lab counter for a few minutes before dissolving it. I asked the students to make a claim about the error and how it would affect the results. They then had to provide some evidence and reasoning about the claim. It wasn't "perfect" CER, but having used the framework with them just last week I found that it helped the students give a bit more depth to their evaluation. This was awesome to read.  Thanks a bunch for the "shout out" and taking the time to share your reflection.

You mentioned allowing students to use particle diagrams as part of their "reasoning".  I really like this idea!  Though we obviously want to build their verbal explanatory skills, we know that sometimes explaining an idea verbally just doesn't cut it--so we try to represent the model in a slightly different way, like particle diagrams.

You also had mentioned implementing the CER for an error analysis.  This is awesome too.  Currently, our department approaches error analysis with a process that goes like this: Identify the error, what is the effect of the error?, and how would you fix the error next time?

Do you think some sort of combination of CER and the approach mentioned above would be useful for error analysis considering it's a topic that SO many students struggle with?

Thanks again for writing this.  It's so useful to see another chemistry teacher's experience!

Thank you for the initial inspiration!

As for error analysis, I think a combination might work. Just think about what you want/expect from the "reasoning" aspect. It can be quite flexible.

For error "impact" I'd like to see that on two levels. First, what is the size/magnitude of the impact? Would the error significantly alter results? Or is it minimal? Second, what is the direction of impact? Would it make the calculated value too high? too low? Or for a graph, does it change the slope of the best fit?

Certainly the "how do you fix the error" should be in that discussion, but that is often easier than the effect/impact discussion.