Nomenclature has always been a challenge for a segment of my students. I have broken it down, attempted flipped assignments, hyperlinked documents, tried spiraling techniques and POGIL. There has always been a population of students who struggle each year with this concept.

Our department started Chemistry Poker to help students with nomenclature. We are not sure where this idea came from but it has evolved over the years. Mike Geyer and Kim Cooper have contributed to the evolution of this game and learning technique.

The set up is a bit labor intensive, but once it is constructed, it will last for years. First obtain 12 decks of inexpensive playing cards. It helps if six decks are one color and six are another. We use blue and red colored decks. This helps to prevent cards mixing between groups. 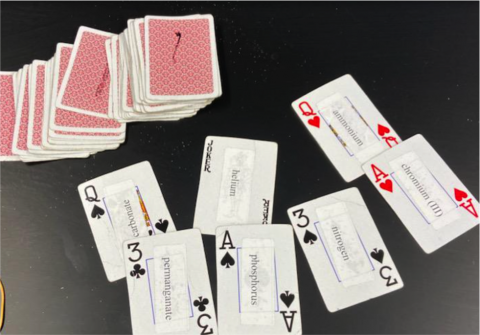 Next, decide on the list of cations and anions that you want to include for your students. We use some repeat cations and anions as well as some element names. Place all of the cations on one color of card and all of the anions on the other color of card. Each of these is either typed or written onto a label that is then put onto the face of a card.

A group of about 3-5 students chooses a dealer. The dealer shuffles the cards and deals each student in the group 5 cards. The goal is to write and name the proper formulas with the cards the student possesses.

This student would hopefully realize that it is impossible to make any compounds since they don't have any anions to combine with the three cations they are holding. The student can discard up to 3 cards and ask the dealer for 3 new cards. Imagine that they discard lithium, argon and neon and their new hand includes: sodium, copper(II), hydroxide, chlorine and helium

The student realizes that helium cannot be used but that they now have two cations and two anions to choose from that can form compounds. Here is what they record.

Students create a table including the cations and anions they used and the resulting formulas and names of the compounds formed.

Now it is time to tally up the score for the hand. The key is to look at the subscripts (be careful not to include the subscripts that are part of polyatomic ions. For instance, sodium chloride has one sodium atom and one chloride. This would count for a total of two points. Copper(II) hydroxide has one copper and two hydroxides. This would count for a total of three points. Students do not count the one hydrogen and one oxygen in the hydroxide. They just count the polyatomic ion as a unit. The hand above has a total of 5 points. They must also have the proper names and formulas for the points to count.

Students play several hands and keep track of points. They are generally highly engaged throughout the process. They ask many relevant questions and help each other with the names and formulas. This activity is a great review activity. A teacher can also make different levels of cards depending on where the students are academically.

I have found that this activity provides high student engagement, can be adapted on many levels, is a great review or even a formative assessment. Students are also able to stay 3 feet apart, wash hands and wear gloves.

Do you have a “go to” activity for nomenclature? Please share.