To address these misconceptions, I designed a gallery walk to introduce students to the concept of ionic compounds that contain cations of variable charges. Students may have previously seen some examples of compounds that are formed with these elements, but have not been taught the rules for naming them. They have been taught and have extensively practiced forming and naming binary ionic compounds of fixed charge, so they are familiar with the general rules of naming ionic compounds (name the cation first, the anion ends in –ide) as well as the idea of balanced charge in ionic compounds.

A gallery walk is an activity in which students explore multiple images or texts that are placed around the room. As they walk around, they make observations. This activity was designed as a digital gallery walk, but it can also be printed out and used in the traditional format with students writing observations as they move through the “gallery”. During the activity, students explore names, formulas, images and sometimes extra information about related compounds. As they progress through the gallery, students are prompted to make specific observations and compare and contrast the compounds. I did this as a Pear Deck activity (a Google Slides add-on that allows teachers to see student responses to questions in real time), but it could also be done with a different program (such as Nearpod – another digital program that allows teachers to review student work in real time or even screen monitoring programs). A digital whiteboard program such as Jamboard would also be another option to present this activity, but this method would allow all students to see each other’s observations, which may change the way the students engage with the exploration. One of the particular strengths of this activity is the discussion that occurs as the teacher can see the real-time student responses, but if this is not possible then students would probably benefit from seeing each other’s responses, as they do in a gallery activity where they make observations and leave them at each image on a sticky note. By the end of the activity, students should self-discover the meaning of the names and the rules that guide them: 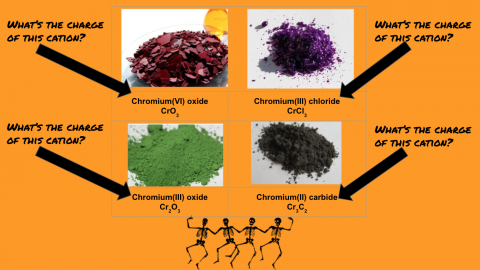 The activity begins with a simple comparison of two compounds, increasing in information on each slide and leading student through the discovery process (see figures 1 & 2 for examples). The slides are also intentionally designed to address common misconceptions as students move through the activity (see Table 1).

It took about 30 minutes for my students to work through in Pear Deck. After this activity, we transitioned into a traditional practice of ionic naming with students being asked to give names or formulas for the corresponding given information.

In previous years in which material was presented via direct instruction, students really struggled with the meaning and purpose of Roman numerals in ionic nomenclature. After using this activity to allow students to self-discover the purpose and meaning behind the numerals, comprehension was greatly increased and mastered more quickly. This was accomplished by having students do the thinking through higher order tasks (comparisons, predictions) and guiding questions. Students were much more engaged in the activity than they were during a traditional lesson and the side conversations regarding application of the different compounds was engaging for both the students and the teacher. This activity also has the opportunity for extension by having students find their own pairs of related compounds. Ultimately, an activity in which a student is actively engaged will always net greater gains across the board, and this introduction to ions of variable charge provides just such an opportunity.

​Thank you to Thomas Jankowski for his review and suggestions during the creation of this activity. 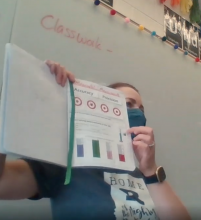