Using Twitter for a Backchannel Chat During a Fish Bowl Discussion 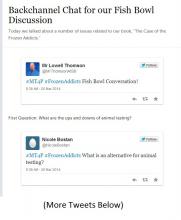 In a previous post, I discussed the work of my grade 10 class as we read the non-fiction story, The Case of the Frozen Addicts. We've continued working our way through the book, taking one class every two weeks to delve into the issues presented. Just this week, we engaged in a fish-bowl discussion. To help steer the discussion, I started the class with a quick warm-up activity asking students to suggest topics or questions that they would want to talk through in the fish bowl.

The technique of the fish bowl involves setting up the class in a circle, with four chairs in the middle. Four student volunteers start in the fish bowl and drive the discussion. Only the four students in the middle can talk. All other students on the outside must remain quiet. My role was just to move things along if needed, but I really didn't have to say much at all. I interjected with information at one point when I thought it would be helpful. And occasionally I would offer a new question or topic for discussion in order to hit as many of the requested ideas as possible.

With the use of technology, SAMR (Substitution Augmentation Modification Redefinition) is often used as a framework for how technology impacts teaching and learning. There is obviously some gray area between the four categories, but I'd like to offer some science-specific ideas to give context. Writing a lab report in Word instead of on paper could be considered substitution. Using Excel or LoggerPro to graph could be augmentation; a very accurate trend line can be calculated, along with the slope. Blogging could be considered modification. While the writing task is fairly traditional, the audience is now global, adding a new dimension to the student's work. Redefining tasks involves going places with the teaching and learning that were previously unreachable. For example, having a Skype discussion with a scientist where students can receive feedback on their work and interact with the scientist would lead to redefining the learning in a classroom.

With that in mind, I set about to transform the traditional fish bowl discussion by having the students use Twitter for a backchannel chat during the conversation. The four students in the middle were tasked with simply discussing the questions. At the same time, all of the students on the outside were engaged in the activity through the Twitter backchannel. They would post ideas and questions using the class hashtag, responding to each other and to the discussion going on in the fish bowl. Then if they wanted to actually join the fish bowl, they'd stand up and tap a member of the fish bowl on the shoulder and switch places. In my mind, this is somewhere along the lines of modification or redefinition on the SAMR scale. Previously shy students that don't like being in the fish bowl can now engage in the dialogue and contribute valuable ideas. And even students that volunteer to be in the middle can then re-engage once they have been tapped out. BT (before technology) the students on the outside might have taken notes of the discussion. But here, the technology (Twitter in this case) completely changes the dynamic. And if you aren't using Twitter with your students, there are alternatives such as TodaysMeet that can work without the need for students to login or register with a social media service.

Student feedback on the fish bowl and backchannel were overwhelmingly positive. Students appreciated the opportunity to hear from their peers about the issues in the book. Admittedly, it wasn't 100% chemistry in the discussion. Instead, the issues ranged from animal testing, to competition between scientists to publish first, to clinical trials and how slow it is to develop new treatments. The common theme amongst the feedback was more: more time for the fish bowl, and simply more of them.

If you'd like to see our backchannel chat, I have curated it using Storify. Feel free to respond to my students on Twitter or through their blogs (mentioned in the previous post), as they enjoy discussing their ideas with a larger audience than is contained within the four walls of our classroom.

How have you used technology to transform your teaching of chemistry? I'd love to hear your ideas.