Review of Element in the Room

The Festival of the Spoken Nerd is a trio of comedians who work in comedy clubs in the UK, using material based on science and math. From the routines and jokes developed for their shows, two of the three (nerd singer/musician Helen Arney and physical scientist Steve Mould) have distilled “The Element in the Room” (EitR).

Their audience is adults, and part of the book they have produced would not be comfortably presented to children. For example, they freely proclaim that scientists have sex, which is something you wouldn’t want youngsters to know about. They also assume that their readers would be comfortable experimenting with gin and tonic. You can see video of some of their humor and demonstrations of science and math on their Festival of the Spoken Nerd website.

Despite the title, “The Element in the Room” includes only a moderate amount of chemistry. The chemistry they describe appears to be pretty accurate, if somewhat skewed. Most of it is in the chapter, “Element Stuff”. For example, they list the four reasons why mercury is a great working fluid for thermometers and only one why it is not much used anymore (its neurotoxicity). Although it is not original to them, the radiation measure known as the Banana Equivalent Dose is especially appropriate when engaging “environmentalists” who argue that the landscape must be purged of all radiation. A small fraction (about 0.01%) of the potassium atoms in a banana, or in a handful of Brazil nuts, or any other potassium-containing material is the radioactive 40-dalton variety, so banana consumers receive radiation with their lunch. [By the way, the EitR footnote on Brazil nuts is another of those gratuitous adult references that I mentioned above. For radiation levels not far above background, the Banana Equivalent Dose is useful, convenient, and evocative.

The opening chapter, “Body Stuff” is about observations and experiments that you can do with your own body, such as discovering some of the check valves in your veins that keep your blood moving in the right direction and finding out whether you are among the humans whose wrists contain an unnecessary tendon, that is often used in surgery as a spare part. Also in this chapter is a very amusing account of a nerd’s contribution to a natural childbirth. Other chapters, “Food Stuff”, “Brain Stuff”, and “Universe Stuff” deal with food (obviously), psychology and perception, and mathematics and space, respectively. In my opinion, the last chapter, “Future Stuff” is pretty lame, but it must be conceded that the future is the hardest topic for anyone to deal with. Of course, science needs to have an experimental component, and EitR puts some into the “Experiment Stuff” chapter. They suggest that an adult party, rather than a laboratory, might be the best venue for investigating static electricity, flame vortexes, smoke rings, and a randomized test of the effect of caffeine on reaction times. As in the rest of the book, the experiments are done more for fun than for rigor. 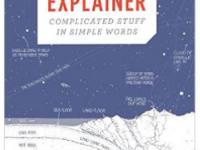