On a recent trip to Wyoming I eagerly paid a visit to Fort Bridger State Historic Park. In the main museum (the former barracks) an interpretive timeline display summarizing the history of (dishonored and broken) treaties and chronic conflict between the US government and western Native Americans captivated me. In particular a brief description of the Bannock War of 1878 piqued my curiosity. Causes of the conflict between the indigenous Bannock and Shoshone and the US Army and the ever increasing numbers of settlers coming into their native lands are many and complex. As tensions increased ultimately the Bannock-Shoshone had two disturbing choices to make- fight or starve1. Though outnumbered and outgunned, they chose to fight. What does this brief history lesson have anything to do with teaching chemistry? Let's find out.

First, whether it's GChem or OChem I challenge myself to show students the connection- sometimes really obvious and other times less obvious- between chemistry (science) and non-science events. I oftentimes do this as an introduction to a particular chemistry topic. Of course, chemistry does an admirable job adequately explaining natural phenomena but it also contributes necessary and valuable context in offering a more robust and comprehensive description of past or current historical, social, economic, or political events or decisions. Let's mention quickly a current example- the nuclear chemistry relevant in the current international diplomacy playing out related to the Joint Comprehensive Plan of Action, or more commonly known as the Iran Nuclear Agreement signed July 2015. Click here to read the actual accord and its nuclear chemistry related commitments. A major cause of the Bannock War of 1878 is rooted in chemistry, albeit covertly. How so?

Second, the native Bannock-Shoshone chose not to starve but rather fight. Like the Irish and their reliance on the starch-rich potato as a staple food calorie source, the Bannock-Shoshone and other western Native Americans relied on the carbohydrate-rich (4kcal/g), nutritious root bulbs of common camas (Camassia quamash) as a staple food supply. Camas, a perennial herb, was harvested in the spring/summer and some of it prepared2 for future consumption in preparation for the calorie-deficient cold winter months when protein (4kcal/g)- and fat (9kcal/g)-based food sources such as elk and deer migrated to warmer winter feeding and birthing grounds and frozen rivers and lakes made it difficult and dangerous to catch protein-rich fish. A spark that aided in igniting the Bannock War of 1878 dealt specifically with camas. Bannocks-Shoshones were angered that settlers' pigs and cattle were allowed to feed in the open fields where camas grew. The pigs and cattle trampled the ground destroying the camas and also ate the camas. The Bannocks-Shoshones protested to territorial authorities but to no avail. With their staple food supply becoming increasingly compromised, in addition to other increasing difficulties, they were forced to fight.

This fall semester in both GChem 1 and OChem 1 I will use the Bannock War of 1878 and the brief storyline above as an introduction to food and structural chemistry. Below are some questions I have developed related to the carbohydrate-rich camas root bulb. The questions are presented in no particular order. Some Qs include potential answers. I hope they are useful to your students and augmenting your teaching portfolio. Thanks for reading...

Q: Colorless and odorless, edible camas bulbs are comprised mostly of the simple sugar D-fructose (a monosaccharide) linked together with other fructose molecules to form long chains of a simple sugar(s), called a polysaccharide. Inulin is the predominant storage carbohydrate in camas bulbs made up from the linked fructoses. The bulbs can be eaten raw but typically were not. Instead Native Americans pit-roasted, steamed, or boiled the bulbs for an extended period of time. Side effects from eating raw or underprepared camas bulbs include discomfort in the lower intestinal region due to bloating on account of gas production from fermentation of undigested camas bulb fiber in the colon. Potato too is comprised mostly of a single simple sugar linked together to form long chains. In the case of potato, the linked simple sugar is D-glucose. The long chained molecule formed is called starch. Unlike inulin, which if not prepared properly is difficult for humans to digest, starch is easier to digest by humans. Based on the structures below speculate why inulin is more difficult to digest than starch. Hint: In real estate there is a saying, "Location! Location! Location!" In chemistry it's "Bonds! Bonds! Bonds!" 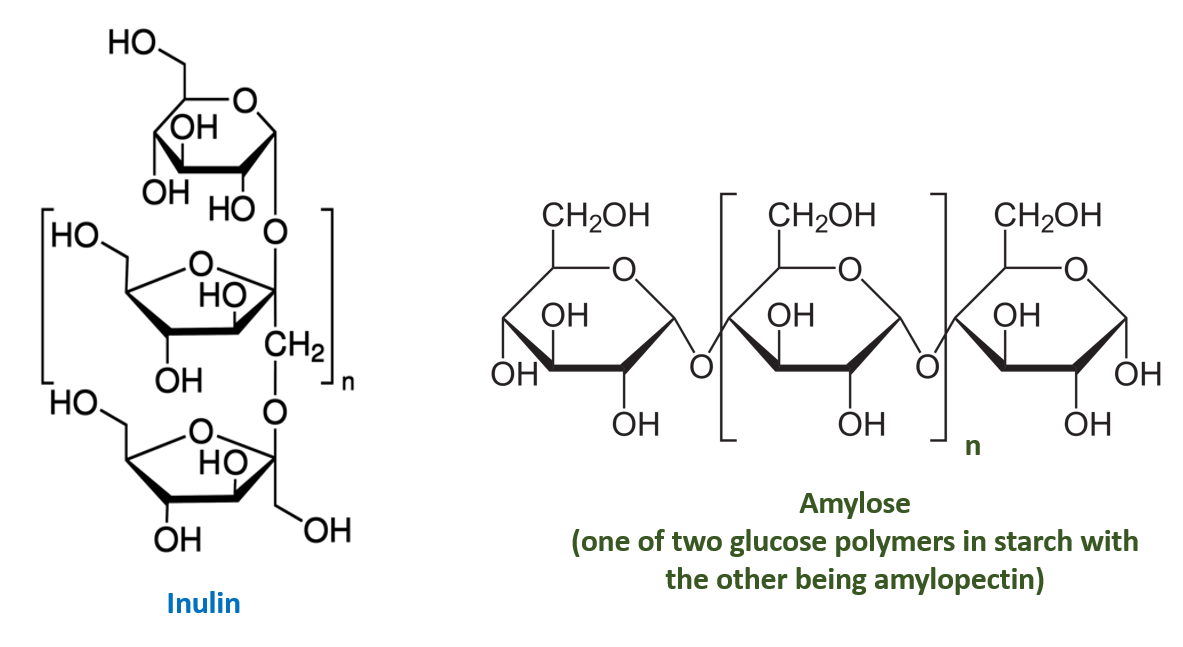 Potential answers: Observation- inulin is more difficult to digest by humans than is starch. It then is reasonable as a starting point to look at the differences in structure and bond orientations between the two polysaccharides in order to (potentially) explain the differences in digestibility. In amylose the glucose units are connected via an α-1,4-glycosidic bond. In inulin the fructose units are connected via a β-2,1-glycosidic bond. The two differ in: 1. where the glycosidic bond connecting the two monosacchairde units is located, and 2. the spatial orientation, basically up versus down, of the glycosidic bond. Perhaps these two structural factors may be why human gut enzymes have evolved to more efficiently break down amylose than inulin polysaccharides. A third possibility may be that there is just enough bond energy difference of the glycosidic bond (C-O-C) between the polysaccharides that contributes to amylose being easier to digest- because it has a weaker C-O-C bond energy- than inulin. The Q below refers to this third possibility.

Q: (A variation of the Q above). Note in the structures above that in both inulin and amylose the simple sugars- D-fructose in inulin and D-glucose in amylose- are connected to one another via an ether linkage, C-O-C. In carbohydrate chemistry this is called a glycosidic bond. And even though bond energies are average bond energies3 in this question let's presume that the C-O-C bond energy (kJ/mol) is the same for both inulin and amylose. Observations indicate that inulin is more difficult to digest than amylose. Since the C-O-C bond energy is the same in both, the difficulty in breaking down inulin versus amylose is not due to a difference in C-O-C bond energies. Based on the structures above speculate why inulin is more difficult to digest than starch. Hint: In real estate there is a saying, "Location! Location! Location!" Apply this to the structures.

Potential answers: See above as related location and spatial orientation of glycosidic bonds.

Q: Based on the structure above for inulin, which choice below is correct for the connectivity between fructose units?

Answer: Choice 4. Whether spatial orientation is alpha (down) or beta (up) is determined by the anomeric carbon.

Q: Inulin powder is touted as a health food. Inulin is extracted from foods with comparably high levels of inulin such as wheat, shallots, red onion, chicory root, and leeks (the bulb). Note the label designation as inulin being a prebiotic. Likely you have seen in the health food section of grocery stores consumable products labeled as probiotics. What's the difference, if any, between a pre- and probiotic product? 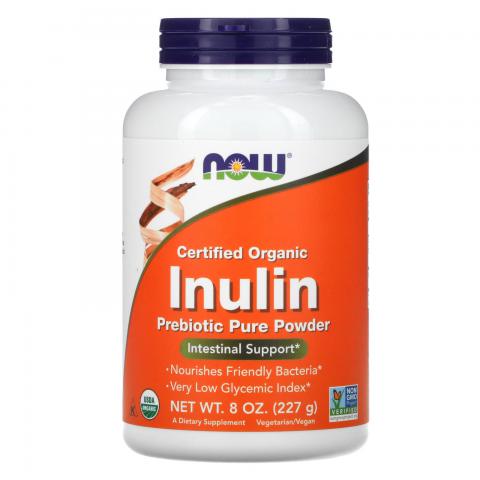 Q: According to the label above inulin powder is indicated to have a "Very Low Glycemic Index". The glycemic index (GI) is a measure of the blood glucose-raising potential of the carbohydrate content of a food compared to a reference food (generally pure glucose). Carbohydrate-containing foods are classified as high (≥70), moderate (56-69), or low GI (≤55) relative to pure glucose (GI = 100).4 In summary, consumption of high GI rated foods causes a sharp increase in blood glucose concentration that then declines rapidly, whereas consumption of low GI rated foods results in a lower blood glucose concentration that then declines gradually.4 Inulin is a polysaccharide made up of a terminal D-glucose bonded to a D-fructose, which in turn is linked to many more D-fructose units. In an individual polysaccharide molecule of inulin the number of fructose units is much, much, much greater than the number of glucose units. Besides having very little glucose per polysaccharide unit, give two more reasons why inulin has a low GI.

Potential answers: Difficult to digest so 'free' carbohydrates not available in the bloodstream to affect the raising potential of blood glucose concentration. And fructose is not glucose. Fructose in the bloodstream does not influence GI as much as glucose.

1. The following quotes are attributed to US Army General George R. Crook: "It cannot be expected that they will stay on reservations where there is no possible way to get food, and see their wives and children starve and die around them. We have taken their lands, deprived them of every means of living." And, "Our Indian policy has resolved itself into a question of warpath or starvation; and, merely being human, many of them will choose the former alternative where death shall be at least glorious."; https://cdapress.com/news/2015/apr/19/bannock-war-of-shattered-dreams-and-broken-5/

2. "Common camas bulbs were considered a delicacy by the Native American tribes within the range of the species including the Blackfoot, Cree, and Nez Perce. Bulbs would be steamed or pit cooked for one to three days breaking down complex carbohydrates into ample amounts of the sugar fructose. A full one third of a bulbs cooked weight becomes fructose when prepared in this fashion. Native Americans would dry out the cooked bulbs and grind them into a meal. The meal was used in variety of ways. At times it would be mixed with water to form a batter and then cooked like a pancake. Often the meal would be mixed with water and formed into large bricks and then cooked and stored for future use."

And, "The Nez Perce at Weippe Praire, Idaho introduced Lewis and Clark to common camas in September 1805. At their first meeting, the Nez Perce gave members of the expedition buffalo meat, salmon and various roots including what the Nez Perce called quamash. Clark wrote that evening in his journal, 'I find myself very unwell all the evening from eating the fish and roots to freely.' Lewis wrote a detailed description of the plant, one of the most detailed accounts* of any plant he collected on the entire expedition, while camped at Weippe Prairie."; both quotes, https://www.fs.fed.us/wildflowers/plant-of-the-week/camassia_quamash.shtml, *:  An approximate 1500 word description in his journal. See http://www.lewis-clark.org/article/1993 and https://digital.libraries.uc.edu/collections/lewisandclark/exhibits/botany/common_camas.php

3. For example, the bond energies of the seven =C-H bonds in quinoline are all slightly different even though all seven bonds have the same hybridization, sp2C-H. See computed bond energies (in kcal/mol) for quinoline in image below. Adapted from Journal of American Chemical Society 1999, DOI: 10.1021/ja982454q. For a recent overview article related to selective C-H bond functionalization see Boerner, L.K. "C-H Bond Breakers Seek Smarter Tools", Chemical & Engineering News, 99(8), March 8, 2021 Thank you for your knowledge, insight and compassion. 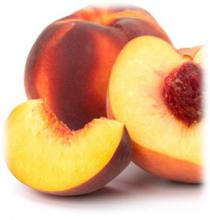