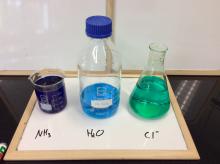 Just the other day within my IB Chemistry HL classes, we were discussing the color of transition metal complex ions in solution. It's a bit imperfect, because they are not yet dissolved, but I set up a number of metal chloride salts in order to help students see the pattern.

They are arranged according to the position of the metal in the periodic table. It ends up being quite obvious to the students that the only metal salts with color are in the d-block. I'm now in the process of ordering more chloride salts so I can complete the pattern even more the next time I teach this topic. 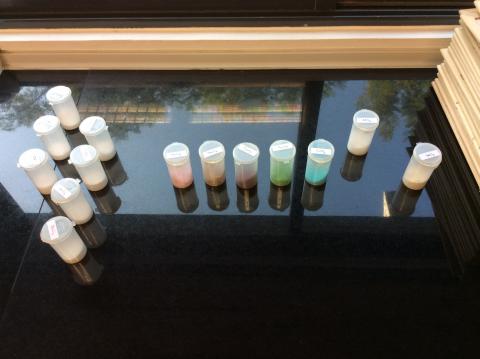 And for those of you that teach IB, you recognize that the new syllabus requires a bit more rigor when discussing the color of these transition metal complexes. Previously, students just needed to be able to explain the splitting of the d orbitals into two sub-levels. They then had to explain the excitation of an electron from the lower sub-level into the higher sub-level - which can only occur if the d sublevel is incomplete (as in Cu2+, but not Zn2+). In the new syllabus students are required to be able to discuss the absorption of specific colors and how that relates to the complementary color that is observed for the complex ion. Additionally, the students need to be able to utilize a spectrochemical series (provided in the IB data booklet) to deduce the effect of different ligands on the splitting of these d-orbitals and how that will affect the wavelength of the color observed.

I wanted to make the spectrochemical series come to life a bit, so I remembered a demo I had shown previously when discussing equilibrium involving the copper-II ion and water, ammonia and chloride ion ligands. Since the metal ion is the same for each, with only the ligand being changed the students could compare the observed colors to see if the spectrochemical series made correct predictions for these ligands.

I started with 1 M copper II chloride (about 1 L was enough for three classes). I set some aside in a large test tube for comparisons, then poured approximately 125-150 mL into a large Erlenmeyer flask. In discussing with the students, I pointed out that the most likely complex ion is [Cu(H2O)6]2+ given the large volume of water used. To this I added some 1 M ammonium hydroxide to provide the ammonia. Initially, copper II hydroxide precipitate is created. But with enough ammonium hydroxide, eventually the deep, dark blue [Cu(NH3)4(H2O)2]2+ complex ion is created. I then set aside some of this complex in a large test tube - again for comparison.

At this point I go back to the spectrochemical series and the color wheel provided by IB. On the spectrochemical series, NH3 is listed as a stronger ligand than H2O, which is stronger than Cl-. In this case, stronger means that the ligand will cause greater splitting of the d orbitals, requiring a shorter wavelength of light to excite the electron into the higher sublevel. For comparisons, I use ammonia and chloride since water is in the middle. The complex ion with ammonia is a dark blue. Based on the color wheel (shown below), since it is observed as blue it must be absorbing predominantly orange light. For the chloride complex, it is a bit of a cyan/turquoise color. Given this color, it is absorbing red. Now comparing orange with red, as predicted the ammonia complex creates a larger energy difference between the d orbital sublevels. (Note: The color wheel below is a Creative Commons free use license, and is not the one provided by IB in the data booklet. Due to copyright restrictions, I am not including that version here.) 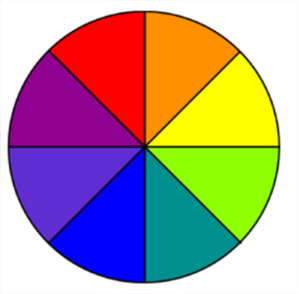 The three solutions at the end for comparison, with the ligands labeled. 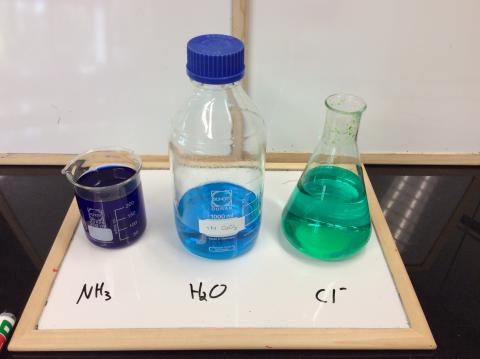 To make the demo even better, next time around I'd like to have a full UV-Vis spectrophotometer around so I could produce a real-time UV-Vis absorbance spectrum for each of the complexes I've formed. This would allow for a great introduction to spectroscopy, and give the students even more data to process and really grapple with as they work to understand this unique phenomenon.

Do you have any modifications you'd suggest for this demo? Or let me know if you try the demo. What were the student reactions? Did this help them understand the spectrochemical series?

This is fantastic.  The experiment is simple to set up, yet a lot of learning must take place for students to completely understand what is going on.  That's my kind of lesson!  I am aware of a paper published in the Chemical Educator that uses cobalt complexes to demonstrate the spectrochemical series.  When using cobalt, a whole rainbow of colors can be generated.  That particular paper can be found here.  What I like about the experiment you describe here, however, is the simplicity of the set up.  Well done!

I am a chemistry major and this will be really helpful for my paper.

I just used this for my own IB Chem HL class. Thanks for the help!

Thanks for the comment. I'm glad you found this useful. How did it go with your students? And did you make any changes to improve the activity that you'd care to share?

Thank you for such a great demo idea. This will be my second year teaching IB Chemistry and I've been looking for a really good demo for the d-block color transition elements to help get the concepts across.

Thank you for your kind words. I'm actually working out my plan for the fall when I return and this demo will be part of my review of equilibrium - which allows me to also review the d-block colors.

I'm working on another one with cobalt complexes, and hope to have it ready as well. If it goes well, I'll share that too.

Thank you for sharing this great idea for a demo! How do you safely dispose of the three solutions at the end?

Thank you for the kind words and response.

In terms of disposal, I was lucky enough at my previous job to have a lab tech that handled disposal. I kept a large flask for inorganics that she would send to a local agency every year.

When I taught in the U.S. previously, I worked with a county agency to dispose of these sorts of things - but I imagine this is different for every locality.

Sorry I wasn't more helpful on that.