An Education Communication About Cation-Containing Words

In the English language, positively charged ions are called “cations” and negatively charged ions are called “anions.” Chemistry students invariably need to show dedication to memorizing lists of cations and anions. If students need to memorize lists of ions, why not have a little fun with it? We have organized lists of chemistry-related words that end in the letters “-cation” and have placed these lists in the Supporting Information for your enjoyment.

As in any language, English words often follow patterns. A verb ending in “-cate” can be converted to a noun ending in “-cation.” For example, the verb locate becomes the noun location. A verb ending in “-ify” can be converted to a noun ending in “-ification.” For example, the verb edifiy becomes the noun edification. The English language also contains a maddening number of exceptions to its patterns. The words we use in chemistry also follow patterns with many exceptions. Complications are even present in the nomenclature that students need to learn. For example, in naming oxoacids based on the corresponding oxoanion, “–ate” endings convert to “-ic acid.”1 So, nitrate ion becomes nitric acid and carbonate ion becomes carbonic acid. But, sulfate ions become sulfuric acid, not sulfic acid, and phosphate ions become phosphoric acid, not phosphic acid. Small wonder that students get frustrated! Our hope is that with the cation-ending word lists we can make a point that learning chemical language is not really much different than learning words in any language and that learning the language of chemistry is a manageable task.

To assemble our cation word lists, we sought listings of words online. To view an impressive number of words that end in “cation”, we recommend the site Lots of Words, which provides a list of 1128 of these words.2 (WARNING: Some of the words might be controversial in a student setting.) A few of the words in this rather large list are words referring to positively-charged species like dication, tetracation, and polycation, but many, many more of the words are a result of converting verbs to nouns. We waded through the list and extracted words relevant to teaching and doing lab work in chemistry. Along the way, we encountered many similar words with differing prefixes (e.g. cybereducation, miseducation, and reeducation) and placed the prefixes into a separate list. We often separated out “-ification” words from the other “-cation” words to highlight the prevalence of that recurring pattern. We also found many words that contained chemical elements or compounds embedded in the words themselves (e.g., acidification and arsenication). The list of the “cations” chemists should know, containing the additional list of chemical transformations “cations,” is in the Supporting Information. 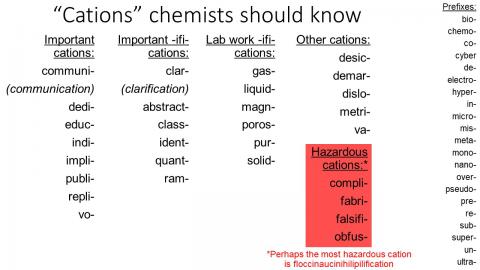 See the full list of "cations" in the Supporting Information

We had hoped to eventually present a companion list for words that end in “anion”. However, the Lots of Words site could only come up with 27 words.3 Weeding out the words referring to negatively-charged species like heteropolyanion, medical terms like opisthocranion, and some words that might be controversial in a student setting, we were left with a few words like fanion (would that be the fluoride anion?) and wanion.

Since there is no “wet” chemistry associated with this post, we have struggled to find points of introduction to the Twelve Principles of Green Chemistry that are specific to this topic.4 Some readers might contend that this document is a flagrant violation of the principle of Waste Prevention. We do hope that rather than unleashing some floccinaucinihilipilification on this post, readers will find it amusing, especially near the beginning of April.

Safety Electronic devices used to read this post should not be placed in water, especially if you are also placed in the same water. For hardcopies of this post, paper cuts are an ever-present hazard.

Acknowledgements We would like to acknowledge our family and the wonderful people at ChemEd X for putting up with us. This work was supported by Bradley University and the Mund-Lagowski Department of Chemistry and Biochemistry with additional support from the Illinois Heartland Section of the American Chemical Society. 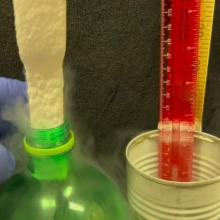