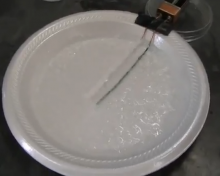 Looking for an easy, hands-on experiment to use in your classroom at the beginning of the school year? In the June, 2013 issue of the Journal of Chemical Education, Isao Ikemoto and Kouichi Saitou describe a simple experiment to demonstrate the electrolytic dissolution of copper ions from a copper electrode. This experiment can be conducted using only items that are easily obtained around the home or in grocery stores.

If ammonia is added to this copper wire, the copper ion produced forms a deep blue copper-ammonia complex:

HS-PS3-3: Conversion of Types of Energy

I used this activity with my AP students during National Chemistry Week. They loved it. We talked through it and discussed, but I will try to create a written assignment to go with it for next time.

The video makes this activity seem less intinidating. Thanks for your work!

just did this yesterday with some AP chem kids in Fulton County here in the ATL, LOVED it...so cool, so cool...thanks for sharing, Deanna and Tom!