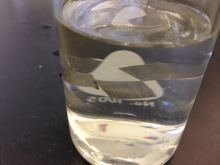 I was looking for a new demonstration to initiate a discussion about polarity and related properties to use as part of an exam review. I found a video at ChemEd X (this is part of a ChemEd X subscription). It is entitled “Floating Squares – Hexane and Water” (see note below). I have placed both solutions together before, but I had not added the squares. The demonstration fulfilled my needs. I could have used the original video and muted it if I had not had hexane to demonstrate with.

I also tried the demonstration with mineral oil in place of the hexane with good results. The only thing I missed there without using hexane is that I hadn’t told my students which layer was water and which was the hexane. I placed a drop of water on the counter then took a drop of liquid from the top layer of the beaker. The hexane evaporates quickly while the water drop is still present. This allowed a discussion to confirm that the top layer was hexane and the bottom was water. Of course, the concept of density should come up in conversation also. We also discussed “why” the hexane evaporates so much faster than the water does. Using the mineral oil left that part of the discussion lacking.

I poured my hexane/water in a jar along with the pieces of paper and was able to mix the solution allowing the students to see that the paper squares always turn graphite up (gravitating toward the hexane) without exposing us to the evaporating hexane.

I love this experiment.  It is so simple, yet so effective.  Thanks for sharing it with us.

Sharing Resources for those Moving to Online Classes - COVID 19 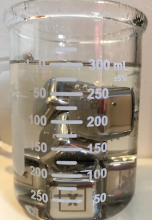 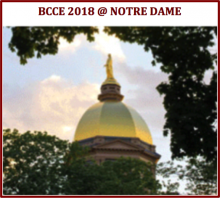