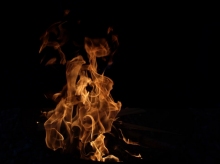 I have always been intrigued by the story of the Hindenburg, the iconic airship that caught fire on May 6, 1937. The accident killed 35 of the 100 passengers and crewmembers on board. As a chemistry teacher, I discuss this from a chemical standpoint and the fact that the airship was filled with hydrogen, a flammable gas, rather than helium, a non-flammable gas, as today’s modern airships are.

It is interesting that it took so long for scientists to truly uncover what caused the airship to catch fire. Or did they? I found an article published March 3, 2013. After 76 years, Jem Stansfield, and his team of researchers concluded that “The iconic airship had reportedly become charged with static as a result of the electrical storm and broken wire or a sticking gas valve leaked the hydrogen into the ventilation shafts. When ground crew members ran to take the landing ropes they effectively "earthed" the airship causing a spark. The fire is believed to have started on the tail of the airship, igniting the leaking hydrogen.”

This was tested with scale models by Stansfield and was also tested by the guys from Mythbusters. In the Mythbusters episode #70,  Addison Baine, a retired NASA scientist, claimed that the airship's metal paint was responsible for the flaming carnage, not the hydrogen. The guys busted this myth with a scale model showing the skin did show thermite-like reactions, but the hydrogen clearly played a role as the burn time was twice as fast.

In the book What was the Hindenburg? published Dec 2014, the author claims “The exact cause of the disaster is still unknown and remains a fascinating historical mystery perfect for this series.” However, after careful investigation by a US government commission, they decided that a hydrogen leak had started. Maybe it was the sharp turns that caused a wire to break and rip a hole in the hydrogen gas cell, or it was a result of a spark from the electricity in the air from the thunderstorm, or possibly the coat of fabric on the outside of the airship. The electricity may have traveled up from the earth when the crew threw down the mooring ropes. The book mentions “We will probably never know exactly what made the Hindenburg burst into flames.”

So what did Hollywood decide? In a recently new TV series called “Timeless”, the characters mention that due to high winds the Hindenburg would make a series of turns causing air friction and building up static electricity. Next mooring ropes would be thrown down and then pulled through the wet grass, which electrically grounds the ship causing a spark in the metal hull, which in turn ignites the leaking hydrogen gas burning 2000 cubic liters of gas. On a side note it was 200,000 cubic meters of hydrogen inside the airship not 2000 cubic meters as mentioned in the TV show.

So the path to finding out the true cause is one that I share with my students. We discuss the chemical properties of hydrogen and helium and consider the resources I mentioned above along with watching a YouTube video. I am happy to add the latest episode of Timeless to my compilation of related resources to engage students in a discussion. My students can hear the many different claims for the historic catastrophe, as well as the evidence behind each, and the reasoning. So, what is your theory? Did Hollywood get it correct? I would love to hear your thoughts.

Thanks for the conversion.  Sorry if that was confusing but my point was that the TV show mentioned the volume incorrectly in the show.  The correct response is 200,000,000 Liters as you mentioned.

Thanks for catching the error. It has been adjusted accordingly.

Though it did not start the fire, a contributing factor its spread was the aluminum coating on the sheathing of the wire frame.  Metal fires are notoriously difficult to stop.  A Navy friend of mine when I pointed out that certain warships had aluminum superstructure, and I asked, "What do you do if you get hit?"  He answered, "Don't get hit."  So though hydrogen has a fairly high lower flammability limit (4% in air), the aluminum coated cloth kept things burning and burning and burning.

Thank you for sharing.  I liked his answer.