Thinking about the world at the molecular level involves the core science concepts that macroscale objects contain a lot of very tiny molecules. These interrelated concepts can be described by combining the ridiculously small numbers for molecular size (e.g., nanometers) and ridiculously large numbers for molecular quantities (e.g., Avogadro’s number). In working with any physical object, or in any science demonstration, there is the opportunity to consider these sorts of concepts. We can note that a tiny but visible object like a 0.3 mg snowflake contains about 10 quintillion (one with 19 zeroes) water molecules with a size of 0.275 nm, all arranged in hexagon patterns.1,2 Another core concept associated with thinking about the molecular level is that the distance between molecules can vary depending on composition and the physical state of the matter involved. Therefore, the number molecular density (number of molecules per unit volume) can vary. Demonstrations involving comparisons between states of matter such as gases and liquids enables discussions of numbers of molecules that could potentially help participants think more at the molecular level.

Video 1. Demonstration of two-liter bottles of gaseous air and liquid water that are labeled with the numbers of molecules they contain and are squeezed by hand. Chem Demos YouTube channel (accessed 1/2/2023).

I show them two 2-liter plastic bottles: one filled with gaseous air and the other filled with liquid water. I typically then lay the bottles on the floor and stand on them briefly one at a time.

One demonstration where the description of numbers of molecules can be easily integrated involves a comparison of the physical properties of the gaseous and liquid states of matter. In this demonstration, participants are asked if they can name the four main states of matter. I note to the participants that I am not able to provide much in the way of the plasma state of matter. Next, I describe solids and the fact that they are stable in shape and size by stomping on the solid floor to show that it does not move or flow. Then I point out that gases and liquids flow much more readily than solids. To show the flow of liquids I run my hand through liquid water in the transparent tub that I use to demonstrate density. To show the flow of gases, I use my hand to fan gaseous air past my face (some participants follow my lead and do the same). The question that I then pose is that if gases and liquids both flow, what is the difference between those states of matter? To answer that question, I show them two 2-liter plastic bottles: one filled with gaseous air and the other filled with liquid water. I typically then lay the bottles on the floor and stand on them briefly one at a time. The bottle filled with gaseous air is much more readily squeezed than the bottle filled with liquid water. I point out that gases have more space between their molecules and are compressible, whereas liquids have much less free space between their molecules and are not compressible. This is where numbers of molecules in well-defined volumes (bottles) can be used to reinforce the concept of number density of molecules. We have calculated that the 2-liter bottles we use for this demonstration can hold approximately 7 x 1025 (70 septillion) molecules of liquid water and approximately 5 x 1022 (50 sextillion) molecules of air. These numbers can be readily mentioned during the demonstrations with the bottles. With roughly a thousand times fewer molecules in the same volume for the gas as the liquid, gases are compressible but liquids are not. Video 1 shows two-liter bottles of gaseous air and liquid water that are labeled with the numbers of molecules they contain and are squeezed by hand. Figure 1 shows still frames from the video. The numbers can be expressed in scientific notation, but also written out to emphasize their many digits. 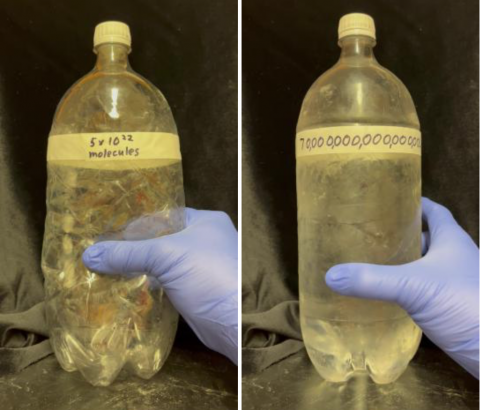 Video 2. Demonstration of liquid nitrogen added to liquid soapy water to produce a bubbly foam containing nitrogen gas. In this video I describe the number of molecules involved and a description of the thousand-fold increase in volume as the liquid nitrogen changes to gas. Chem Demos YouTube channel (accessed 1/1/2023). 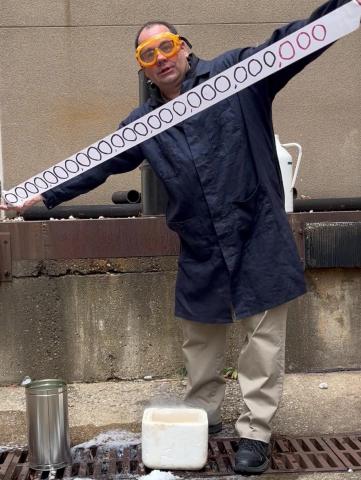 Figure 2. Using a banner to show a five followed by 25 zeroes to illustrate a large number in a demonstration of liquid nitrogen turning to gas when added to water.

No doubt there are other examples that could be used to describe the volume and number molecular density changes between liquids and gases. Changes involving liquid water converting to steam, or vice-versa, would be good examples. The very large volcanic eruption of the Hunga Tonga–Hunga Haʻapai volcano in January, 2022, contained an enormous steam explosion.5 I have not calculated the specific number of molecules involved, but the volume change between the states of water in this and other volcanic eruptions can be used to illustrate the tremendous energy associated with changes in number molecular density. These connections need not be made with every demonstration, but making connections to numbers of molecules for a few demonstrations could potentially help spectators think more at the molecular level.

Safety - The very cold temperatures of liquid nitrogen can produce frostbite, so do not handle any liquid nitrogen or cold surfaces with bare skin – use tongs or the appropriate insulating gloves.

Acknowledgements - This work was supported by Bradley University and the Mund-Lagowski Department of Chemistry and Biochemistry with additional support from the Illinois Heartland Section of the American Chemical Society. The material contained in this document is based upon work supported by a National Aeronautics and Space Administration (NASA) grant or cooperative agreement. Any opinions, findings, conclusions, or recommendations expressed in this material are those of the author and do not necessarily reflect the views of NASA. This work was supported through a NASA grant awarded to the Illinois/NASA Space Grant Consortium.