Making Students Live in Their Discomfort

My school just started second semester on February 3 and I needed to shake things up. My students didn’t like the new vocational classes they had been assigned, everyone was still stressed about grades from the previous term, and some students still needed to make up midyear exams. This malaise was not new. The learning that took place in the week before exams was suboptimal. I was not the best teacher and they were not the best students. Something needed to change.

My students generally sit in groups of four where they can work collaboratively, conduct experiments, whiteboard their data, and work through conceptual and mathematical problems. I spent a fair bit of time during first semester trying to effectively group students, thinking about their needs, their strengths, and how best to set them up for success. Yet, the groups were never quite right and I ended up just leaving students in suboptimal groupings and focused on other aspects of teaching. 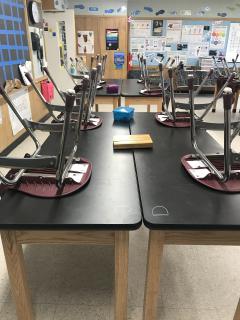 When I got to school Tuesday morning, I took chalk markers and wrote letters A-D on the tables.  Each group of four had their own color, blue, gold, pink, etc (Figure 1). As my students entered the room, they picked up a popsicle stick from a bucket that was hanging on the doorknob.  I had written a color and a letter on each popsicle stick that corresponded to their seat in the room (Figures 2 and Figure 3). 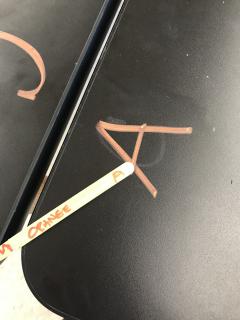 Figure 3: Students find the table and seat that matches the popsicle stick they picked up

The worst news of the day was yet to come for these students.  I told them that they were going to use the same process everyday for a few weeks.  New seats everyday. They were going to have to live in the discomfort of not knowing who they were going to be working with on any given day ahead of time.  They would learn to engage with different students, experience different dynamics, and learn chemistry at the same time.

I used their new seats throughout the class. I gave the students 10 minutes to put together their group’s white board, where each person had a different, specific assignment.  One prepared the graph, another labeled specific sections, the third drew particle diagrams, while the fourth answered the guiding question narratively. Each student had a specific role that they had to complete for their group to be successful.

As the groups completed the assignment and put their whiteboards on stands, all students stood up to look at the other groups’ boards.  Instead of allowing a free flowing conversation, I once again assigned roles. One seat examined the boards looking for similarities, another looked for differences, the third developed a question to ask another group about their board, and the 4th had to answer any questions directed to them.  I directed students to look at the boards in silence for 45 seconds, and then talk in their small groups for another 45 seconds so students presented their group’s perspective and to reduce student’s anxieties.

I tried this with little planning in my first period class where many of the students were not quite awake. The results inspired me.  Students engaged more, had deeper, more meaningful conversations, and did not automatically reach for their phones.

The next day, I had students once again choose a popsicle stick for their new seat, new group mates and new roles.  When they white boarded this time, one person gathered the ideas, another was the ambassador (or spy!) to other groups to see and hear what they were working on, the third helped synthesize the thoughts and the fourth presented them to the class.

Why did I insist my students get new seats every day? To make them live in discomfort.

The first weeks of my class are built on establishing a class culture of respect, where students ideas, voices, and thought processes are valued. Yet, students still shied away from taking academic risks. Too many students worried about being wrong in front of their peers or  were nervous about sharing their thoughts.

Other students became overly anxious about different teaching pedagogies, in particular those that veered from traditional styles: lecture on Monday, worksheets on Tuesday and Wednesday, review on Thursday, and finish the week with a quiz or test on Friday.  They were so used to having to regurgitate the information exactly as the teacher presented it, that they froze at having to construct the learning themselves. Students liked plug and chug equations, but could not explain the scientific concepts when asked. In order for students to learn, I needed to push students out of their comfort zone, to make them curious again.  I needed to find the magic zone between anxiety and curiosity.

As students entered the classroom, they had an opportunity to engage in the class content, to match their interest with their internal motivation to learn.  A successful class has to match student interests to an extent, give them some measure of control, and at times even have the perception of fun.1  While J.A Middleton offered a schema for examining this relationship for internal motivation, I chose a different approach. Instead of trying to just design activities that I assumed would be fun, I changed the environment.  Their perceived arousal increased as they had new seats, new group mates, and new interactions. As students arousal increased, their internal motivation and openness to new ideas did as well.

Instead of having students live in their discomfort after they developed new mental models, I intentionally created it for students as they entered the classroom.

Learning is hard. Students’ preconceived notions about concepts clashed with the material that they were expected to learn. This cognitive dissonance created discomfort for students. Instead of having students live in their discomfort after they developed new mental models, I intentionally created it for students as they entered the classroom. This altered students’ mindset and enabled them to more easily reevaluate their previously held conceptions.

My strategy could not have worked earlier in the year, before we had established a class culture. But by this point at the beginning of second semester, my students had a culture of respecting each other, their thoughts, and their points of view.  Additionally, they knew that I valued their ideas and viewed their mistakes as part of the learning process. We had the ability to laugh with each other, critique whiteboards while not critiquing other students, come to consensus and live in the Learning Pit.2

Regardless, some students still attempted to manipulate the seating arrangement by trying to choose the popsicle stick that would seat them with their friends. But, most students quickly adapted.

By the third day, students walked in and knew to pick up a popsicle stick. At the end of the first week, one student said “I kinda love this.  I mean I hate it, but I love it. It’s a little extra, but I feel like I’m really learning.”

I guess I’ll keep making them feel uncomfortable in the classroom.

1. Middleton, J. A. A Study of Intrinsic Motivation in the Mathematics Classroom: A Personal Constructs Approach. Journal for Research in Mathematics Education 1995, 26 (3), 254.

Elsden-Clifton, J. Creating Discomfort in the Name of Transformative Pedagogy, International Journal of Pedagogies and Learning 2008, 4 (3), 39–48.

The Importance of a Professional Learning Community

Teaching in the Time of COVID-19