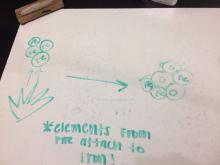 I have a love-hate relationship with people who officially call themselves "Modelers" and who have been trained by the American Modeling Teachers Association (AMTA). Here is the love part: Every teacher I have met who is an official "Modeler" is a pretty incredible person. They are passionate, willing to share, student-centered and love what they do. More importantly as they share their students' work it is clear that the students have advanced conceptual abilities. By "advanced", I mean they seem to be doing much better than my students. They don't just put stuff on paper but explain it extraordinarily well. Mary Palmer is one of those teachers. She has been trained in modeling. She is my "go to" person when I am stuck and trying to figure out a better way to teach something. Her students' journals are nothing short of amazing. I have tried joining the AMTA, examined their curriculum, talked to Mary but something has been missing. I have not yet been able to officially take a workshop. This is the "hate" part. I know it works but I just can't seem to figure it out...something has been missing.

This week, thanks to Mary, I saw a video by Paul Anderson of Bozeman Science on Modeling called "What is Modeling?". It is one of the best explanations I have ever seen. Let me put it to you this way...stop reading this and watch the video now.  As soon as I saw Mary she said, "That is really it!"

Here is the "how to" piece in the video that REALLY helped my light bulb go on. Show the kids an event. Have them develop a model. Have each kid draw and write about the model and force them to ask themselves if this model can explain the event. As a teacher, first say something nice about it and then look for their misconceptions and use this as a formative assessment. Combine the individual models with others. Slowly build a larger model and constantly ask if this really explains the event.

The reasoning that Paul and others suggest this pedagogy is that we use models all the time in science so why not let kids develop them first?  Instead of just putting them into the heads of students, let the students make their own and guide them with experiments. Come to think of it...isn't this what scientists do? Paul mentioned an experiment he had his students model in his video. It just so happened I was on the same topic and decided to try it. The results were far better than if I had just said, "Here...this is the model scientists use for this event..." It was difficult at first but students asked really good questions based on prior information.

Was this simple the first time? No...it was messy..kind of like eating street tacos. But, like the street tacos, is was a good messy. Students who are not typically confident about science spoke up. It forced some students to think.

The video and this experience certainly has encouraged me to try this more often. In a perfect world, I would definately take a Modeling workshop. For now, it will be eating lunch twice a week with Mary who has agreed to help me get started. Thinking about going down this path? Don't be afraid. Check out the AMTA now. Have ideas about Modeling...why not leave a comment?