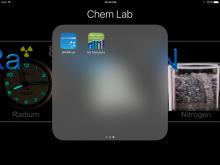 This past week, as part of our Thermochemistry unit, my students were completing one of my favorite Target Inquiry Labs entitled “ A Very Cool Investigation”.  We were using calorimeters, dissolving ammonium nitrate, and my students were recording the change in temperature using a digital thermometer.  Some of my students had noticed that with similar amounts of ammonium nitrate, some of the changes in temperature happened quickly while some of them happened much slower. I had noticed that some of the students added the salt slowly while others just dumped it in and some students stirred slowly while others were much more vigorous as if it was a contest to see who could get the lowest temperature based on how vigorously they stirred their solution.  However, with the digital thermometers, it would require a stopwatch to measure such a difference. Some students used their phone as a stopwatch but again it was mostly between a select group of students who saw this so called lowest possible temperature as fast as possible as a contest.

When my next class came in I asked one of the lab groups if they would like to test these different variables during their three trials. I had obtained a new wireless Temperature Sensor from PASCO and saw this as the perfect time to introduce it to my students. The sensor easily connected to the student’s iPad via Bluetooth after I had downloaded the free SPARKvue app. With a few directions, the students enjoyed the opportunity to let the sensor collect the data and then from the graph obtained on the iPad they were easily able to read the change in temperature. The added benefit of using the temperature sensor was that the graph included time. I decided to repeat this with several other lab groups since number one, I saw my other students become very curious in the new piece of equipment. Number two, I was able to save the data, then download for the next days lecture to initiate discussion. I knew I was going to use the infographic from Compound Chemistry regarding making chemical reactions happen faster and now with the use of the graph we had some data regarding an increase of concentration to back up our findings from lab, which led to a great introduction and discussion.  The temperature sensor was super easy to use and I hope to add more to get a class set. They sell for $39.00/each and require coin cell batteries. I also recommend checking out the other great wireless products from PASCO.

To update my previous blog, Classkick is becoming available on Chromebooks, Desktops, and Laptops very soon. Click above to join the waiting list and get notified when this becomes available.

Thanks to Wendy Czerwinski for passing on to me the App: High School Chemistry: Practice Tests and Flashcards by Varsity Tutors.  The app is free and is worth passing on to your students or even using yourself if you are looking for question ideas. Topics include: Acid Base Chemistry, Titrations, Chemical Reactions, Equilibrium, Types of Reactions, Electrochemistry, Elements and Compounds, Compounds and Bonding, Elements and Atoms, Kinetics, Measurements, Units, Nuclear Chemistry, Phases of Matter, Gases and Gas Laws, Phase Diagrams, Solutions and Mixtures, Stoichiometry, The Periodic Table, and Thermochemistry and Energentics.  The app allows you to make flashcards by typing, use of a photo, or by audio dictation.  The app is compatible with iPhones, iPads, and the iPod Touch using iOS 7.0 or later. 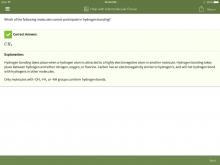