Spring has arrived and parts of the world are experiencing all sorts of color changes in the landscape as the days get longer, plants grow, and flowers bloom. There is a fantastic amount of amazing biochemistry at work in making those colors. At a less complex level, sunlight can also be used to produce a variety of colorful chemical changes in photochromic compounds. Though sunlight is available at many times of the year, events and concepts associated with springtime (e.g. flowers, Easter, rainbows) often feature a variety of colors and perhaps provide one of the best opportunities to showcase the many colors available in photochromic materials.

A variety of photochromic materials are available, including glasses lenses, clothing, jewelry, and nail polish, all of which change color when exposed to sunlight, and then revert to their original color when removed from sunlight. Perhaps the most well-known example among many chemistry educators are the “UV beads” available from a variety of sources. These beads typically convert from white to colorful when struck by photons in the 300-360 nm range, and have been used for years to illustrate chemical concepts such as photochemistry, kinetics, and UV light sensing.1 Ron Perkins did an excellent job summarizing how the photochromic pigments in these beads and other materials work in Ref 1. In their colorless form, each pigment molecule contains two planar regions with atoms in rings and with conjugated electrons. These regions meet at right angles around an sp3 hybridized carbon atom. When the molecule absorbs UV light of the right energy, a bond between that sp3 hybridized carbon atom and a nearby oxygen atom in one of the rings breaks. The planar regions in each molecule then align into one plane containing conjugated electrons. This larger planar structure can absorb visible light, and the photochromic pigment becomes visibly colorful.1,2 Photochromic molecules such as spiroyrans, spirooxazenes, and naphthopyrans exhibit this type of chemistry.2

In addition to making slime, the photochromic glue itself can be used as a paint that can be applied with the glue dispenser and spread using a paintbrush. Yellow, blue, red, and purple are all excellent colors for springtime. Some color experiments with the glue are shown in Figures 1 and 2. Figure 1 shows the glue applied to paper flowers, eggs, and butterflies and viewed in indoor and outdoor lighting. The butterfly shapes were made by applying glue to one side of the pattern, folding the pattern in half to get glue on both sides, and then opening the pattern. Figure 2 shows the glue applied to hard-boiled eggs to make photochromic Easter eggs and viewed in indoor and outdoor lighting. Note: See Safety section below. 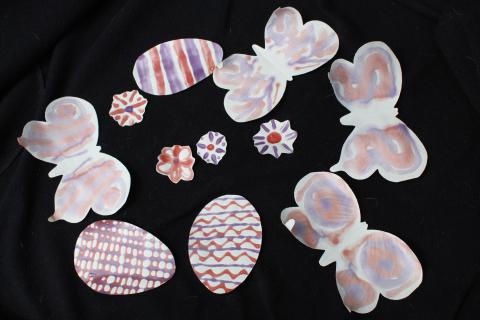 Figure 1: Photochromic glue applied to paper flowers, eggs and butterflies and viewed in indoor (top) and outdoor (bottom) lighting. The glue was applied with the glue dispenser and sometimes spread using a paintbrush or, in the case of the butterflies, by folding the two halves of the patterns together and then opening them. 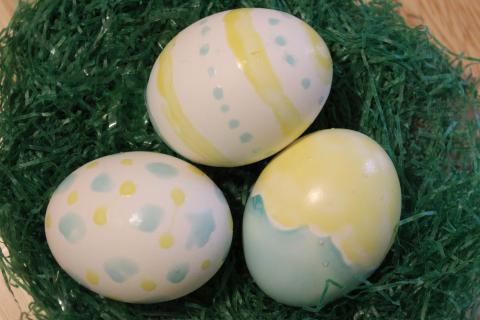 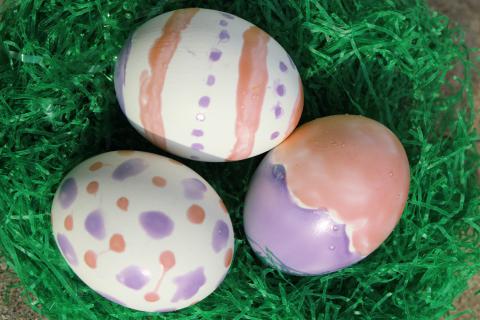 A video describing UV beads and the Elmer's Color-Changing Glue and a brief discussion of the photochromic dyes that they contain is available on YouTube.

In an attempt to use the photochromic glue itself to illustrate chemical bonds breaking and reforming, the abstract drawings in Figure 3 were developed. The drawings represent portions of the photochromic molecules described earlier. Most of drawings were made with markers on white paper. An oxygen atom is represented by a green circle, the sp3 hybridized carbon is represented as a black circle, and other atoms are represented by the white circles. Bonding interactions are represented by lines. The bonds that break when struck by UV light are represented by non-black lines. These non-black lines are not drawn with markers, they are drawn with Elmer’s Color Changing Glue. The background colors in the figures (drawn with markers) are chosen to match the colors of the light activated glue. When the figures are irradiated with longwave UV light, the non-black bonds change color and seem to disappear, representing the bonds breaking in the molecules when irradiated with UV light. These diagrams have limitations in that they do not illustrate the change in shape of the molecules when the bonds are photochemically broken. Perhaps someday a more advanced photochromic molecular drawing could be developed with two types of photochromic ink: a dark to colorless conversion for bonds breaking and a colorless to dark conversion for bonds forming.

Figure 3: Photochromic glue used to represent a covalent bond that breaks in drawings of portions of photochromic molecules, before (top) and immediately after (bottom) exposure to longwave UV light.

Other than showcasing the author’s overall lack of art skills, the photos and videos illustrate how this glue can be used as a photochromic paint for a variety of purposes. The color-changing properties of this paint, resulting from breaking and forming chemical bonds in a carefully controlled manner, can be connected to classroom and other educational settings.

Safety The packaging of the Elmer’s Color Changing Glue describes it as “Washable/Safe/Nontoxic.” However, applying the glue to a hard-boiled Easter egg is probably outside of the original design considerations for this product. The author makes no claims as to the safety of eating a hard-boiled egg that had its shell covered in this glue. This could be an opportunity to discuss green chemical and toxicological principles in education and outreach settings. Note also that UV beads might present a choking hazard to small children.

Acknowledgements This work was supported by Bradley University and the Mund-Lagowski Department of Chemistry and Biochemistry with additional support from the Illinois Heartland Section of the American Chemical Society and the Illinois Space Grant Consortium.

Students who demonstrate understanding can Evaluate the validity and reliability of claims in published materials of the effects that different frequencies of electromagnetic radiation have when absorbed by matter.*

Students who demonstrate understanding can Evaluate the validity and reliability of claims in published materials of the effects that different frequencies of electromagnetic radiation have when absorbed by matter.

Assessment is limited to qualitative descriptions.

Emphasis is on the idea that photons associated with different frequencies of light have different energies, and the damage to living tissue from electromagnetic radiation depends on the energy of the radiation. Examples of published materials could include trade books, magazines, web resources, videos, and other passages that may reflect bias.