Pyrex by any other name... 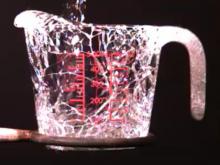 This difference can be important!  How many times have you rinsed a very hot beaker with room temperature water when working in the lab?  I have done so many times, knowing that borosilicate lab glassware is capable of withstanding large differences in temperature without cracking.  I had always assumed that Pyrex glass was synonymous with borosilicate, thermal-shock resistant glass.  This was indeed the case until the late 1990’s when Corning, Inc. sold rights to the Pyrex name to World Kitchens.  After the sale, Corning continued to sell borosilicate glass for laboratory use under the Pyrex name.  However, World Kitchens began to sell soda lime glass for kitchen use – also under the Pyrex name.  World Kitchens made this change because soda lime glass is cheaper to manufacture and more resistant to breakage from mechanical stress than borosilicate glass.  Imagine my surprise one day in the early 2000’s when I decided it would be safe to boil water in a Pyrex measuring cup directly on the stovetop...the measuring cup cracked, sending broken glass and hot water all over the stove and floor!  In fact, reports of “exploding glassware” began to crop up as other folks began to unwittingly expose World Kitchens’ soda lime glass to extreme temperature differentials while working in the kitchen.  Now Pyrex is simply a brand name that has nothing to do with the chemistry of the glassware being sold.

Thanks go to Kristen Lewis and Nathan Ford for assistance in filming and carrying out the experiment of pouring room temperature water on a very hot measuring cup.

To learn more about this topic, check out the following:

Thanks for the blog post. The background you gave on the 'Pyrex' name being sold puts things in context for me. Over the Christmas holiday, we were baking our turkey in the oven in a Pyrex dish. I was basting the turkey with some warm (but not hot) stock and the Pyrex dish exploded right there in the oven. To say I was shocked would be an understatement. Mostly I was glad I didn't get cut, or any glass in my eye. Since I wasn't in the lab, I wasn't wearing my trusty goggles. It took quite an effort to clean up all the glass shards. And we ordered pizza delivery, since our turkey was ruined.

And now I know why!

Hi Lowell, thanks for commenting.  I like pizza over turkey, anyway!