Teaching Kids How to Fail 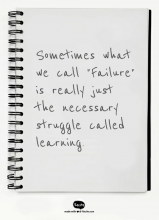 Last year, I worked hard to teach my students how to fail and I believe it was the most important lesson they could have taken away from my class.

I recognize the fact that not every student who passes through my door will go on to become a biochemist or chemical engineer. They may not need to remember that awesome activity we did with Avogadro’s Hypothesis – but perhaps they will take away something more valuable. Perhaps they will have learned how to respond when faced with failure.

If you are familiar with my blog you know I use Modeling Instruction™ in my classroom. Modeling uses guided inquiry to help students think like scientists. We don’t provide cookbook labs with protocols for students to follow. Students collaborate and come up with lab procedures to test different ideas. We understand not every plan is going to be successful.

We allow students to fail.

We allow students to struggle.

We help them redesign and rethink their lab plans.

We guide their thinking without telling them the answer.

I don’t want to give the impression that this is easy. Creating a learning environment where students feel safe enough to take risks is challenging, especially in an educational system that tends to favor product over process.  Students resist and protest at first. Many are concerned about how making a mistake will affect their grade. They are overly concerned with their scores on tests and not focused enough on learning.  One thing that has helped me convince students to take risks is employing a Standards Based Grading Philosophy. I give students multiple opportunities to demonstrate they understand the material. I provide targeted feedback to help them improve in areas they haven’t mastered and we have conversations about learning, not about points. Through this, we build a collaborative relationship where our common goal is the student’s success.

At the start of the blog post I stated that I had worked last year on teaching my students how to fail. Well, what do I have to show for it?

I’ve been back to school now for three weeks and I’ve had two powerful experiences so far which lead me to believe my message got through to some students. First, on the second day of class in my AP course I gave everyone a challenge. I handed out small pieces of plastic and told them they needed to find the density of the object. Sighs of relief went out around the class.  They all knew how to do this – mass over volume! Then I told them they couldn’t use a balance and the only materials they would have to work with were graduated cylinders, distilled water, and a solution of isopropyl alcohol. This is when I anticipated groans and protests. Instead I was met with murmurs of excitement.  They didn’t immediately know how to do it, but they were actually excited to try and figure it out! I even heard three students at 3:30 in the afternoon (a full half hour after school had ended) sitting at a table in the hallways discussing how to accomplish this. The following day, students came in and immediately began carrying out the procedures they had made. They started discussing their plans and offering suggestions to each other. Not everyone was successful at first, but as the groups completed the task, I saw high-fives and congratulatory pats on the back.  Students who struggled to get the answer refused to give up. They adjusted protocols on the fly and discussed why their original plan didn’t work. I saw awesome things happening in my classroom that day, but that was not why I considered this activity a success. I called this a win because not one student asked me how many points this was worth or how their grade would be affected if they got the wrong density.

The second experience I had was with one of my former AP students. She gave a talk in front of the entire school community about her experience interning at Eli Lily this summer. She did pharmaceutical research as part of Project SEED. A few weeks into the research, they hit a snag. Something had gone wrong and three weeks of data had to be reworked. Natalie explains,

“…I was sad, really frustrated, and my mentor could tell, but she said, "Natalie, it's going to be okay." She told me, “When there's a problem, it's a good thing." I thought this was ridiculous.  There's no way problems are good...but they are, because that is the basis of research. Hitting a bump in the road, and working to understand why that issue occurred so you can solve it. This helps one to gain a deeper understanding of a concept, and hopefully develop methods to stop that problem from recurring. The day our research had to backtrack three steps was the day I learned what real research was.”

We need more risk-takers, especially in science. Lets work to make that happen.

Looking for a beginning of the year activity to promote a culture of learning collaboratively without the worry of failure, check out Build a Boat.

Thank you for sharing this! It's so hard to push people in this way.

This yet another example of a valuable life skill that cannot be measured on a paper and pencil test.

Failure is excruciating. But it’s not as excruciating as watching your child fail. It’s not just that parents are biologically programmed to care about them. We really want them to succeed, partly so they have a great life and partly because, frankly, their success reflects well on us.

But as parents increasingly navigate their kids’ lives so that they avoid failure, those kids lose an important life skill, and one one they will inevitably need: how to find the courage and motivation to get back up. So how do you help kids fail, or rather, how do you help kids deal with failure? Brené Brown, whose new book Rising Strong is about coming back from failure, has spent nearly her whole career studying shame and courage, and in a recent interview with TIME she gave this advice: first, don’t try to fix it.

A Strategy to Encourage Self-Reflection 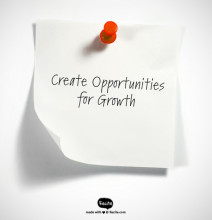