As I was preparing to write this blog, I read the Chief Reader Report on Student Responses that was written for the 2019 AP Chemistry Free Response Questions. You can visit this web site to find more information about the AP Chemistry Exam. If you scroll down to the bottom of the page, you will see links to the 2019 Free Response Questions, Scoring Guidelines, Chief Reader Report, Scoring Statistics, and sample student responses for each of the seven free response questions.

In this blog, I will describe how I use student misconceptions that are mentioned in the Chief Reader Report as a guide to help me design and write multiple-choice items for AP Chemistry.

In free-response question #1 part (b) on the 2019 AP Chemistry exam, students are told that urea (H2NCONH2) is soluble in water. They are given a particle diagram that shows a urea molecule and several water molecules. Students are asked to draw one dashed line "to indicate a possible location of a hydrogen bond between a water molecule and the urea molecule." Incorrect answers to this question revealed that some students did not know which atoms should be involved in the hydrogen bonding attraction between water and urea. When drawing a hydrogen bond, a connection should be made between a hydrogen atom that is covalently bonded to N, O, or F and an atom of N, O, or F in a different molecule (or in a different part of the same large molecule). 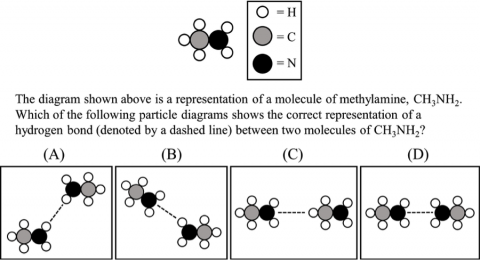 Figure 1: Item that addresses a misconception about hydrogen bonding 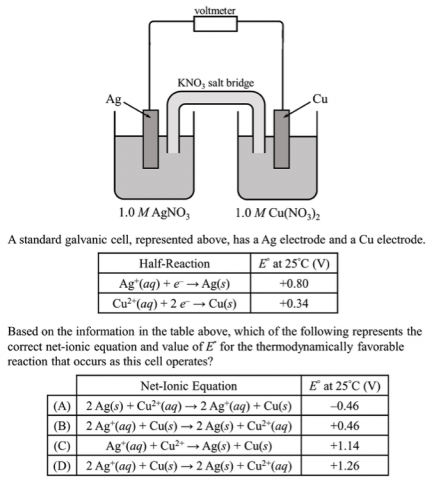 I wrote a multiple-choice item (Figure 2) related to the misconceptions about redox reactions and cell potential. Students are given a diagram for a standard galvanic cell involving Ag and Cu. There is also a table with the relevant half-reactions and standard reduction potentials. Students must choose the option that shows the correct balanced equation for the thermodynamically favorable reaction that occurs in the galvanic cell and the correct value of the cell potential (E°).

Figure 3: The process of combining two half-reactions together

The correct answer to the item in Figure 2 is (B). Choice (A) is a distractor in which the net-ionic equation and the sign of the cell potential are reversed. This distractor was written because some students may think that the sign of E° should be negative for a thermodynamically favored reaction. Choice (C) is a distractor that is based on the attempt to simply combine the two reduction half-reactions from the table. Choice (D) shows the correct net-ionic equation, but the value for E° is incorrect. Some students may not realize that the value of the cell potential is an intensive property. If they had incorrectly multiplied the potential for the Ag half-reaction (+0.80 V) by two, they would have obtained an overall cell potential of (+1.60 V) + (–0.34 V) = +1.26 V.

Free-response question #3 on the 2019 AP Chemistry exam describes an experiment in which an excess amount of Ca(NO3)2(aq) is added to a sample of Na2CO3(aq), resulting in the formation of CaCO3 as a precipitate. In part (b), students are given a particle diagram that shows a sample of CaCO3(s) on the bottom of the beaker. The diagram also shows four NO3– ions and two Na+ ions in solution. Students are told that the particle diagram is incomplete. They are asked to "draw in the species needed to accurately represent the major ionic species remaining in the solution after the reaction has been completed." In order to balance the overall charge and account for the excess Ca(NO3)2(aq), students were supposed to add one Ca2+ ion to the particle diagram. Common mistakes included the following. Students drew multiple Ca2+ ions without adding more NO3– ions to maintain the charge balance. Students drew two Na+ ions instead of one Ca2+ ion, ignoring the fact that Ca(NO3)2(aq) was added in excess. 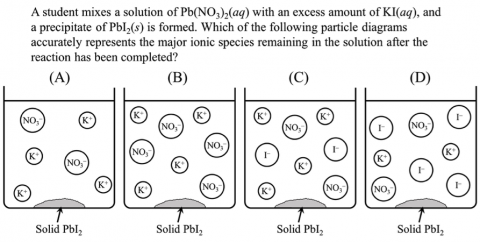 Figure 4: Item that addresses misconceptions about particle diagrams for a precipitation reaction

As I had discussed in my previous article, when a teacher sits down to design a chemistry item, it is helpful to consider student misconceptions. If teachers can keep track of the various mistakes that students have made during previous assessments, these student errors can serve as a guide during the process of writing new items. I encourage you to add your comments to the conversation below. I would love to hear from you. 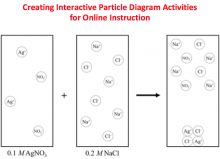