Introduction: Starting from 2018-2019, the third year of the Bachelor of Science in Primary Teacher Education at the University of Bologna underwent a strategic reorganization of the study plan. All scientific disciplines were brought together in the second semester; furthermore, along with the disciplinary laboratory, already mandatory for the students, an interdisciplinary laboratory was introduced, which provides a series of bridging activities between the scientific disciplines involved, i.e. physics, chemistry, ecology, and biology.

The purpose of the interdisciplinary laboratory, which focused on water ("Not only H2O: The unsuspected qualities of water"), is to demonstrate that the same topic can be explored from different perspectives and that only by integrating all interpretations from these different perspectives is it possible to understand the topic as a whole.1 Because of the COVID-19 pandemic, it was necessary to rethink and redesign the planned laboratory activities so as to make them more suitable for an online learning environment. This post focuses on the chemistry laboratory activities.

The hands-on chemistry laboratory: The content of chemistry laboratory centers around the interaction of light (a massless entity) with matter. The aim of the lab activities is to highlight the different roles that light plays in chemical phenomena. Indeed, light can act as a reactant in a chemical reaction, which in this case is defined as a photochemical reaction; it can be emitted following the absorption of energy by an atom or molecule, a phenomenon called luminescence; light can be absorbed by a molecule resulting in change in both its structure and its color, a phenomenon known as photochromism; and finally, light can be considered a product of a chemical reaction. In such a case, the reaction is called chemiluminescent.

During the hands-on chemistry laboratory for each of the above mentioned light-matter interactions, a practical activity is proposed:

The virtual chemistry laboratory: In the design phase of the virtual laboratory various factors were taken into account, namely the availability of materials, the equipment needed, and the place (space) necessary to obtain optimal results for the reactions. It was decided to use video-experiments and to involve students as much as possible, even if in a remote distance learning setup, to stimulate them to design experiments using "home" materials. To achieve this, a week before the virtual laboratory each participant received a list of materials needed for the experiments and instructions.

Where do colors originate from? This question initiated the virtual laboratory and through an interesting discussion it was demonstrated that color is not an intrinsic property of an object. It depends both on the incident light that illuminates the object (matter) and on the sensitivity of the observer's eyes. A video experiment was designed that shows a white paper with words written in black and red. When the paper is illuminated with white light, both the black and red letters are clearly visible. But when illuminated with red light, only the black letters are seen since the incident red light is not absorbed by the red letters but is absorbed by the black letters (figure 1 below). The wavelength of incident visible light on an object affects the color of the object perceived by an observer.

Photochromism: Spiropyran is a well-known photochromic molecule. Its behavior under UV light was shown to students via a video-experiment. Note: Spiropyran is not easily available, and the procedure must be carried out in a chemistry laboratory.

A thin layer of spiropyran aqueous solution is trapped between two acetate sheets and sealed with a laminating machine. When the colorless spiropyran layer is illuminated with UV light, spiropyran's structure changes, resulting in a consequent change to blue color (figure 2 below) where the UV light was shone. This phenomenon is the basis for photochromic lenses and for some garments in which features on the garment's surface appear when exposed to sunlight. Photos below- Starting upper left and going clockwise, photochromic paper and its interaction with UV energy. 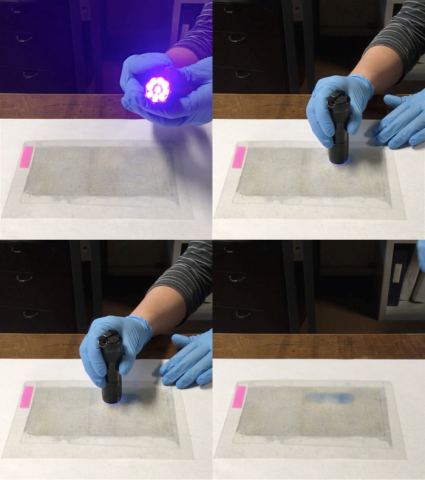 Luminescence: So students can experience luminescence phenomenon at home, an easy experiment using a mobile phone and highlighters can be used. A mobile phone's LED flash is the light source. Colorless Scotch tape is placed over the LED and a blue permanent marker is used to color the Scotch tape. This creates a filter that absorbs out the visible light from the LED but allows the shorter wavelength UV to pass through. The UV home-made torch (= flashlight) can be tested using fluorescence highlighters (figure 3) or other substances such as turmeric dissolved in water and also tonic water which contains quinine. Photos below- Left, preparation of UV homemade flashlight. Different highlighters illuminated by white light (middle) and by homemade flashlight (right).

Several analytical techniques such as flame tests and liquid chromatography are based on color. To show the beauty of flame tests, a video was proposed to the students. The chromatography uses common materials available at home- felt-tip pens and vegetables. An experiment could be realized with the spinach leaf extract that also enables to explain the change in the leaves’ colors as the seasons change, a phenomenon that fascinates children.

In addition to the typical green and yellow-orange leaves' colors, many vegetables and flowers exhibit other ones that span from red to purple, and blue. These natural pigments can be extracted and used for different purposes: to paint, to dye fabrics and as pH indicators. The students can, for example, prepare natural pH indicators using red cabbage extract, hibiscus tea, or cranberry juice and test them with the acid and basic substances that can be found in their house.

Natural pigments can even be exploited in photography. Indeed, anthotype is a printing technique which uses a photosensitive substance of vegetable origin to obtain an image; it is, therefore, an experiment suitable also for preschool. With the help of a video illustrating all the experimental steps, the students can obtain their own photographic print using spinach leaves and sunlight.5

An interesting use of natural pigments, that can be exploited in an interdisciplinary perspective, consists in the preparation of an invisible ink from gall nut extract. The invisible writing is then revealed applying an aqueous solution of an iron or copper salt to it; this result is ascribed to the fact that gall nuts contain gallic acid and tannic acid which are capable of complexing metal cations such as Fe (II) and Cu (II), forming colored complexes.6 The first source that reports this preparation, the Compendium of Mechanics by Philo of Byzantium, is dated back to the third century BCE: during wars and sieges, this invisible ink was used to exchange secret messages, which could be delivered on unusual writing surfaces, such as a hat or the messenger's skin. A video of the preparation and use of the invisible ink is shown to the students; several support can be used to test it, like watercolor paper, papyrus (figure 4) or even some type of fabric.7 Photos below- Left, lettering on papyrus infused with gallnut extract; Right, revelation of letters with aqueous solution of copper (II) sulfate and iron (II) sulfate.

The last part of the virtual laboratory consisted in group works, a very important activity in the hand-on laboratory that, in such a case, was guaranteed by the creation of virtual rooms, which enables the students to interact and share material. Each group selected a topic among those addressed in the first part of the laboratory, and then was involved in preparing a teaching unit: it had to describe an experiment, suitable for both elementary school and preschool students and designed with "home" materials, it had to include historical perspectives and it had to illustrate possible inter- and trans-disciplinary links. As final event, the groups shared and discussed the teaching units; the purpose was to make them realize how easily can be the designing of a chemistry experiment as this discipline pervades our daily life. Finally, it was also fundamental to discuss with the students the sources they used to prepare the teaching unit, addressing the general problem of the reliability and authority of online contents.

Conclusion: Based on students' opinions and suggestions regarding the virtual chemistry laboratory, some conclusions can be drawn. The virtual laboratory allowed students in the Bachelor of Science in Primary Teacher Education program to do experiments at home with readily available materials; they also realized how simple it can be to organize a scientific experiment and how easy students can replicate the lab activities.

However, if we consider a broader target of students, including lower school grades, experimentation at home can be dangerous if proper safety guidance is not emphasized and detailed and precise instructions are clearly written so as to carry out the experiments. Even if imagination and creativity might be inhibited, in the case of virtual laboratories it is a necessary limitation to implement active teaching/learning and minimize accidents.

Acknowledgments: The authors would like to thank Dr. Federico Plazzi, Dr. Giulia Tasquier, Dr. Fiorella Prada and Cecilia Bulgarelli for the design and realization of the interdisciplinary laboratory.