When introducing acid-base theory, the concept of indicators and their pH color changes is usually discussed. To illustrate some color transitions to students, a classroom demonstration has been devised based on a memorable scene from Disney’s 1964 movie Mary Poppins.

The Movie Scene – How was it done?

In the scene, about halfway through the film, the magical British nanny (played by Julie Andrews) pours medicine from a bottle into three large metal spoons which she then dispenses to the two children, Jane and Michael, followed by herself. As each dose drains from the bottle, different colored liquids (sequentially, red, green, and yellow) miraculously appear in the spoons.

Just how the original scene was created remains a bit of a Disney mystery – dare we say Disney magic? I contacted several Disney special effects experts who either failed to respond or offered no explanation. I even asked Steve Sauer, Julie Andrew’s manager, to ask the actress what she remembered about the scene. He replied by email: “Regretfully, Julie has no knowledge as to how that scene was accomplished.” This confirmed what Ms. Andrews says in the Mary Poppins DVD commentary track where she clearly states the actors were surprised when the different colored liquids appeared on the spoons. She claims the spoons and bottle were “regular,” and that the liquids came from the same bottle and were safe to drink. “It was completely bizarre ...and genuine reaction, we both gasped ... it was so strange,” she says on the DVD, adding, “and it tasted good!” While the scene could be easily achieved with computer graphics today, special effects technology was not as advanced in the early 1960s. Several ideas, mostly on film blogs and other movie discussion groups, have been proposed over the years to explain how the scene was accomplished but most (for example, film cutting, post-production editing to add color, or dyes hidden on the spoons) can be discounted based on Andrews’ comments. The most likely explanation is the use of a special prop bottle containing three chambers each filled with a different colored liquid (such as flavored colored water). If true, this is merely a variation on the old “inexhaustible bottle” magic trick2 that dates to the 17th century and was perhaps best adapted by the late British magician Paul Daniels as the Magic Tea Kettle.3 While the Daniels’ kettle appears more complicated, the basic trick usually relies on the magician surreptitiously placing fingers over unseen air holes at the back of the container, thereby controlling the flow of liquids from the different chambers within. However, Julie Andrews’ comments seem to suggest she did not knowingly manipulate the bottle in which case the Disney special effects team must have found another way to achieve the effect by merely tipping the bottle. (Readers are welcome to add suggestions in the comments section below as to how this may have been done in a narrow glass bottle!).

To a chemist, however, the scene should be fairly easy to recreate for a classroom demonstration using suitable indicators in a medicine bottle and a small quantity of acid or base concealed on the spoons. The ‘medicine,’ of course, cannot be consumed! 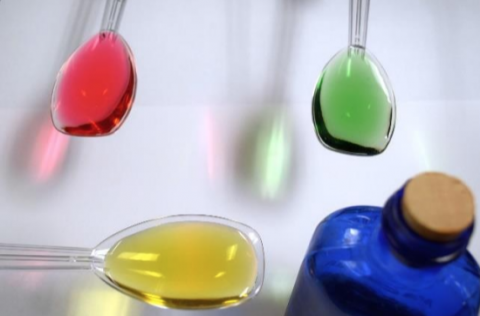 Several criteria were important when creating this demonstration:

Begin by playing a clip of the Mary Poppins medicine bottle scene either directly from a DVD cued to the scene (about 1-hour into the movie) or from a YouTube link.8 I’ve recently explained using such clips for classroom instruction is legal.9

Tell students this “magical” scene is going to be recreated and invite two to the front of the classroom and hand each a plastic spoon (pretreated with the acid or base, initially not revealed to students) while the instructor holds the third (like Mary Poppins in the film). The class can be shown that there appears to be nothing on the spoons. The instructor then pours out the ‘medicine’ from a bottle onto the spoons which turn red, green, and yellow. After the demonstration, explain to students how the classroom ‘trick’ was done with acid-base indicators.

But before revealing which indicators were used, challenge the class with this problem. What indicator or combination of indicators could have been used to produce the color changes seen in the classroom demonstration? A table of indicators10 displaying some common indicators and their color change ranges can be shown to the class. The question could be discussed in class or posed as a homework assignment.

Students will hopefully observe that no single indicator from the table would turn red at one end of the pH scale and green at the other end and, therefore, a combination of indicators must be used. If they need a clue, explain why the combination of methyl orange and phenol red would not work – both would be red at both ends of the pH scale.

While the red ‘medicine’ could easily be produced in the spoon with acid using several indicators (methyl orange or methyl red), no indicator shown in the table is green at high pH (the spoon with base). However, several indicators are blue at high pH. By mixing one of these (bromothymol blue) with an indicator that is yellow at high pH (methyl red), the blue color of the former will overlap with the yellow color of the latter to produce green. The bromothymol blue/methyl red combination will still be red in acid since the stronger red color of methyl red masks the yellow of bromothymol blue in acid. Between a pH of around 5.5 to 6.0, the mixture of these indicators is yellow. Note that the yellow is more of a butterscotch yellow rather than a lemon yellow and very similar to the color shade on Mary Poppins’ spoon.

Some students may observe that there are indicators in the table that are green. However, that color appears over a narrow pH range, usually between two other colors, making it more difficult to achieve since a very specific pH is required. The advantage of using bromothymol blue is that excess base can be used and still achieve a green color. In addition, other indicator combinations from the table should work to some degree. For example, students may suggest a mixture of methyl red and thymolphthalein since the latter is colorless in acid and that is a valid answer. However, unlike methyl red and bromothymol blue, thymolphthalein doesn’t occur as a water-soluble sodium salt and must be dissolved in alcohol. It will work, but the green color that forms isn’t as rich as the methyl red/bromothymol blue mixture and the color change occurs a little more slowly.

Universal indicator could also be used but, again, requires careful measurement of the base otherwise it will turn blue. The methyl red/bromothymol blue combo works best since any amount of 1 M acid or base on the spoons will produce the desired colors.

To Prepare the ‘Medicine’

Place 100 mL of tap water in a beaker. Add 15 drops of the methyl red solution and 5 drops of the bromothymol blue solution and stir. The solution will be green, depending on the tap water’s pH. Add 0.05 M H2SO4 dropwise until a yellow/butterscotch color forms (usually only a few drops will be required). If too much acid is added (or the tap water is very acidic) and the solution turns red, adjust with 0.05 M NaOH back to yellow. Pour the solution into the ‘medicine bottle.’ (Note that the amount of indictor can be varied but may affect the color of solutions on the spoons).

To Prepare the Spoons

Just before class, prepare the spoons by adding one drop of the detergent solution to each, then 2-3 drops of either the 1 M H2SO4 or NaOH to two spoons (again, acid will turn the indictors red, base will be green). Use a Q-tip to gently spread the solution over the spoon, avoiding bubble formation from the soap. More can be used if the Q-tip is dry and any excess can be shaken off. If done carefully, the spoons should appear dry. Perform the demonstration as described in the above section.