Solution to Chemical Mystery #4: The Case of the Misbehaving Balloon

Did any of you guess what was going on in Chemical Mystery #4:  The Case of the Misbehaving Balloon?  In this experiment, several balloons were placed in liquid nitrogen.  Most of these balloons shrunk tremendously – to almost zero volume – when cooled in liquid nitrogen (77 K).  However, one balloon seemed to resist shrinking when cooled to this temperature.

In this demonstration, all balloons are filled with air except for one, which is filled with helium.  The trick is to not fill the helium balloon too full, otherwise it will float in air.  Placing the non-floating, helium-filled balloon side by side on the desktop with air-filled balloons disguises the fact that it is filled with helium.  The air filled balloons contract substantially when placed in liquid nitrogen.  However, the helium balloon “misbehaves”; it doesn’t contract nearly to the same extent as the air-balloons.

Why the difference in the shrinking behavior?  First, let’s assume the gases behave ideally, that is to say that the gas molecules display no intermolecular attraction for one another.  If the gases are assumed to behave ideally, then Charles’s Law applies:

Given that the gases start at room temperature (about 300 K) and are cooled to liquid nitrogen temperature (77 K), Charles’s Law predicts that the gas should shrink to about one quarter of its original volume when cooling from 300 K to 77 K. 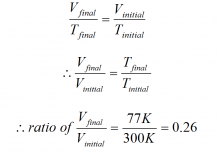 The air balloons were filled by blowing them up with exhaled breath.  Therefore, these balloons contain mostly nitrogen and oxygen gases, with a bit of carbon dioxide gas and water vapor.  None of these substances behave like ideal gases at 77 K:  Both water and CO2 are solids at this temperature, oxygen is a liquid at this temperature, and nitrogen is right at its condensation point.  Thus, the intermolecular forces between molecules in air are strong at 77 K.  As a result, we would expect air to occupy much less volume at 77 K than what would be predicted if air molecules behaved ideally at this temperature.  Indeed, when an air-filled balloon is placed in liquid nitrogen, it shrinks far below one quarter of its original volume as predicted by Charles’s Law.  When I conduct this experiment, it appears as though an air balloon contracts to almost zero volume!

On the other hand, helium gas particles cooled to 77 K display very little attraction for one another.  This makes sense, since helium does not liquefy until cooled to 4 K1.  Because of this, helium gas behaves ideally when placed in liquid nitrogen.  Thus, a helium filled balloon does not shrink to zero volume when placed in liquid nitrogen.  In fact, the helium balloon appears to “resist” shrinking!  (I find it kind of fun that the so-called “misbehaving balloon” is the one that behaves ideally in this demonstration).  While I have not been able to quantitatively measure the volume of a helium balloon cooled to 77 K, it does appear to be reasonably close to one quarter of its room temperature volume as predicted by Charles’s Law.

The video below describes how to carry out this particular experiment with some commentary on Charles’s Law and ideal vs. real gases.

If you give this experiment a try, let me know how it goes.  What do you think might happen if you cool balloons filled with other gases (carbon dioxide, for example) in liquid nitrogen?  Can you get your students to predict what gases will behave ideally at 77 K?  Be sure to share the results of your experiments with us!  Also, if you have any comments or see any mistakes in my analysis of this experiment, please be sure to let me know.  I'd enjoy the opportunity to learn more about this experiment.

1.  The first person to liquefy helium was Heike Kamerlingh Onnes,  who won the 1913 Nobel Prize in Physics for this work.  A NOVA special entitled "The Race for Absolute Zero" chronicles this spectacular scientific feat.

My Heart Beats for Chemistry