Palladium is an element with some extraordinary properties. As a catalyst, palladium is a popular choice due to its ability to couple organic molecules and its keen ability to promote the formation of bonds between carbon and hydrogen.1,2 The need for improved palladium catalysts arose from advancements in various industries such as phone technology and pharmaceuticals.3 Palladium metal is known for its ability to take up hydrogen gas. Some of the hydrogen gas molecules are adsorbed to the surface of the metal. Some of the diatomic hydrogen gas molecules break up, and the hydrogen gas atoms are absorbed into the interstitial holes between the palladium atoms in the metal. Both the adsorption and absorption processes for hydrogen with palladium are exothermic.4 When the hydrogen atoms are embedded within palladium, the resulting alloy is referred to as palladium hydride (PdHx).5 Industrially, palladium hydride could become a key player in hydrogen storage and usage. This includes purifying hydrogen gas using palladium metal.

The enthalpy of the hydrogen combustion reaction far exceeds that of hydrogen absorption into palladium, at approximately -40 kJ/mol H2.4 Using Hess’s Law and combining the desorption enthalpy with the enthalpy of formation in Equation 1 still produces an energy yield of about 200 kJ/mol. This enthalpy release is sufficient to ignite various substances. Finely divided palladium adsorbed on carbon that has adsorbed hydrogen can be pyrophoric. Figure 1 shows palladium on carbon that has been exposed to hydrogen and then quickly dumped into air over a heat-resistant surface. The heat produced by the reaction of hydrogen and oxygen is sufficient to ignite the carbon and produce a shower of sparks. This picture is about a decade old; our research group has placed a moratorium on this experiment due to the fire hazard that it presents. 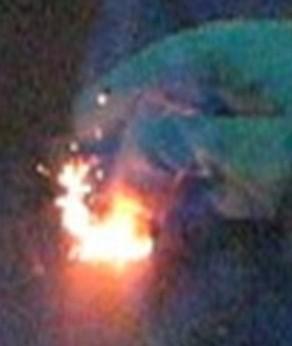 Figure 1. Palladium on carbon bursting into a shower of orange sparks when placed in an atmosphere of hydrogen gas and then dumped into air over a fireproof surface. DANGER: Do not attempt this.

We sought a safer demonstration, so we found experiments involving palladium foil. In those experiments, the palladium foil is first heated red hot in the flame of a Bunsen burner to clean it and then it is placed into an inert atmosphere. The cooled foil is then exposed to hydrogen gas, and then quickly dumped out of its container onto a sheet of thermal paper.10 The foil heats up as its trapped hydrogen reacts with oxygen in the air, and the thermal paper darkens from the heat of the foil.11 We performed similar experiments, first flame-cleaning the foil to red heat with a Bunsen burner. When the foil had cooled, it had turned from shiny and silvery to a dull light gray color. It would be interesting to view electron microscope images of the foil to see if heating made the surface more rough. The foil was cooled in an atmosphere of nitrogen gas and then exposed to hydrogen gas. The foil was then dumped onto a heat-resistant surface in the air and the heat produced was monitored using a forward-looking infrared (FLIR) camera,12 as shown in Video 1.

Video 1. FLIR video of flame-cleaned palladium foil dumped from a hydrogen atmosphere onto an insulating surface in normal air. The foil heats up as its trapped hydrogen reacts with oxygen in the air. ChemDemos YouTube Channel (accessed 4/26/2022)

Video 2. Visible light video of flame-cleaned palladium foil dumped from a hydrogen atmosphere onto an insulating surface in normal air. The foil changes in reflectivity and flexes as its trapped hydrogen reacts with oxygen in the air.  ChemDemos YouTube Channel (accessed 4/26/2022)

Stream of hydrogen gas reacting with oxygen in air at surface of palladium WARNING: Fire hazard!

Another chemical topic to consider is the “greenness” of these demonstrations from the perspective of the Twelve Principles of Green Chemistry, which yields mixed outcomes.13 The use of a piece of palladium foil to facilitate the reaction of hydrogen and oxygen to produce water has a real strength in demonstrating Principle 9: Catalysis. By using foil instead of finely divided palladium, the recoverability of the catalyst increases while decreasing the potential of palladium entering the environment, which supports Principle 1: Waste Prevention. With respect to Principle 6: Design for Energy Efficiency, one could point to room-temperature palladium catalyzing the reaction between hydrogen and oxygen, without the need for a heated ignition source. However, best results seem to require the use of heat to clean the palladium foil before placing it in contact with hydrogen gas. The activities fall short in Principle 7: Use of Renewable Feedstocks. Both oxygen and hydrogen can be produced biologically, but palladium itself does not have a green renewable feedstock. Though it is more abundant than some other rare catalytically important metals,5,14 it has to be mined which limits its effectiveness as a renewable catalytic resource. For Principle 3: Less Hazardous Chemical Synthesis, these activities require multiple considerations with respect to significantly reducing hazards. Toxicology is a complex subject, and metal toxicity must account for considerations such as metal oxidation number and what ligands and counterions are associated with the metal.15 Bulk palladium metal is considered to be less toxic than many palladium(II) species.16 Ironically, palladium has been considered a distinct, toxic heavy metal and nickel and copper have been considered more environmentally friendly; however, recent data has shown the opposite to possibly be true.15 While palladium foil does not produce sparks like the palladium on carbon exposed to hydrogen in the first experiment described above, the foil still can glow with enough heat to ignite hydrogen gas and that is obviously a hazard. To answer the question posed at the beginning of this post, we think these demonstrations are too risky to do live and in-person. Rather, view a clip already available online.

Safety The activities described here should not be taken lightly. Precautions, including proper personal protective equipment such as goggles, should be used when working with demonstrations. Hydrogen is a very flammable gas, and precautions must be taken to keep hydrogen from burning in an uncontrolled manner. Always wash your hands after completing the demonstrations.