Determining the empirical formulas of ionic compounds based on charge balance is often a challenge for beginning chemistry students. Many visual aides have been developed for this purpose, from repurposing commercial interlocking bricks to custom 3-D printed bricks. This article describes yet another option– upcycled can carriers. These high-density polyethylene (HDPE) carriers, shown in Figure 1, are especially popular in in the craft brewing industry. They have several characteristics that make them an attractive candidate for classroom upcycling. 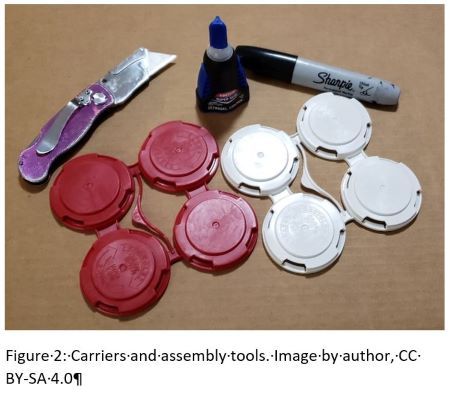 Positive ions (cations) on the left, negative ions (anions) on the right. No judgment here- that just mimics the order we write them in ionic compound formulae.

Combine positive and negative ions by placing the top portions of the anions over the bottom portions of the cations until the total lengths of the cations and anions match. There should be no visible red caps showing from the cations, and each of the anion caps should have a red cap under it. The formula is then said to be balanced. Figures 5 and 6 show an incorrectly and correctly balanced CaCl2. Figures 7 and 8 show examples of 1+/2- and 2+/3- compounds, respectively. 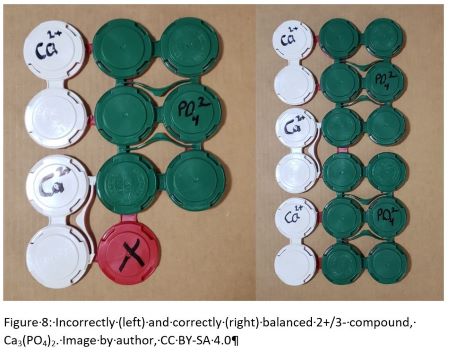 Have the Lab Practical Early