“The Candle Experiment” – an Opening Exercise for General (or introductory) chemistry 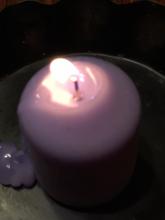 I … bring before you, in the course of these lectures, the Chemical History of a Candle. There is not a law under which any part of this universe is governed which does not come into play and is touched upon in these phenomena. … There is no more open door by which you can enter into the study of natural philosophy than by considering the physical phenomena of a candle.
Michael Faraday - The Chemical History of a Candle - 1860

This exercise is intended as an ice-breaker for a first or second class meeting. It also serves as an introduction to physical & chemical properties and application of the macro/micro/symbolic representations of chemical phenomena. Finally, it also provides a framework to mention many of the topics to be covered in a general chem first semester course.

After a brief introduction of the concepts of macroscopic observations and measurements; microscopic modeling of molecular events; and symbolic (equations & pictures) representing those events, unlit candles are passed out to the class such that there is about one per four students. Depending on the layout of the classroom it may be more or less easy to have students form groups. In our table-based classroom, I usually ask the first and third rows to turn around to face the second and fourth.

Students are asked to make as many observations as possible about the candle and also to note the possible measurements they could make with other equipment (thermometer, balance, etc.). While the groups are making their observations, the instructor can wander the classroom and monitor group interactions; ask leading questions, etc. After a few minutes I pass out a few matchbooks without additional instructions. Some groups use them immediately; some include the matches in their observations; and some are still gathering observations (or talking to each other).

Eventually all the groups are working with lit candles. Here, the level of observation and experimenting/playing can vary widely. Usually someone in each group knows that the flame requires oxygen; often that carbon dioxide is produced by burning. I ask the groups (individually) what they have seen and try to get them to consider one or more leading questions:

Finally, I return to the front of the room and ask for group observations. This leads to additional discussion within and between groups; and I steer the discussion toward categorizing their comments as chemical vs. physical changes and macro/micro/symbolic representations. Very often there will be some prior-knowledge ideas: “We need oxygen” – respond with “how do you know” (or, “what experiment could prove that”) etc. It allows discussion of conservation of mass, atomic theory, and the early development of chemistry as natural philosophers tried to determine whether fire was a substance.

In this exercise, students become absorbed in the depth of exploration to be found in a simple and familiar object. Because they are generating the observations without a check-list, they must think for themselves about which are important or unimportant observations and what they can agree on.

Student engagement is improved in this exercise for the following reasons:

“The Candle Experiment” – an Opening Exercise for General (or introductory) chemistry