The Next Generation Science Standards (NGSS) emphasize a new vision for science education; one that is focused on real scientific inquiry and skills, rather than rote memorization of facts. An essential component of the NGSS is developing and using models to represent concepts. Scientific models are tools to understand abstract knowledge and phenomena, and include diagrams, drawings, physical replicas, mathematical representations, analogies, and computer simulations.1

Dynamic equilibrium is a particularly challenging and fundamental concept in chemistry. Although students are generally able to solve numerical problems related to equilibrium, they often rely on memorized formulas and do not have a conceptual understanding of the topic.2 Consequently, misconceptions are common. This activity will address the following:

Conceptual models have been beneficial in correcting misconceptions related to equilibrium.3 For dynamic equilibrium, I like to use a physical analogy that pits students against each other in a classroom-wide “snowball” fight.4 Not only is this activity great for building students’ conceptualization of dynamic equilibrium, but it is also really fun!

In this activity, student’s make “snowballs” out of sheets of scrap paper and engage in a “snowball” fight. The classroom is divided in half so that there is a product side and a reactant side. After a 5-second round, the number of “snowballs” on each side are counted and plotted on a graph. Although the data will look best with larger numbers of students and snowballs, the activity still works well with smaller classes. The data presented below was obtained with only 13 students. In any case, equilibrium is usually achieved after about six rounds.

Before we begin constructing the model, I use an “entrance card” (figure 1) to uncover the misconceptions that we are attempting to remedy. 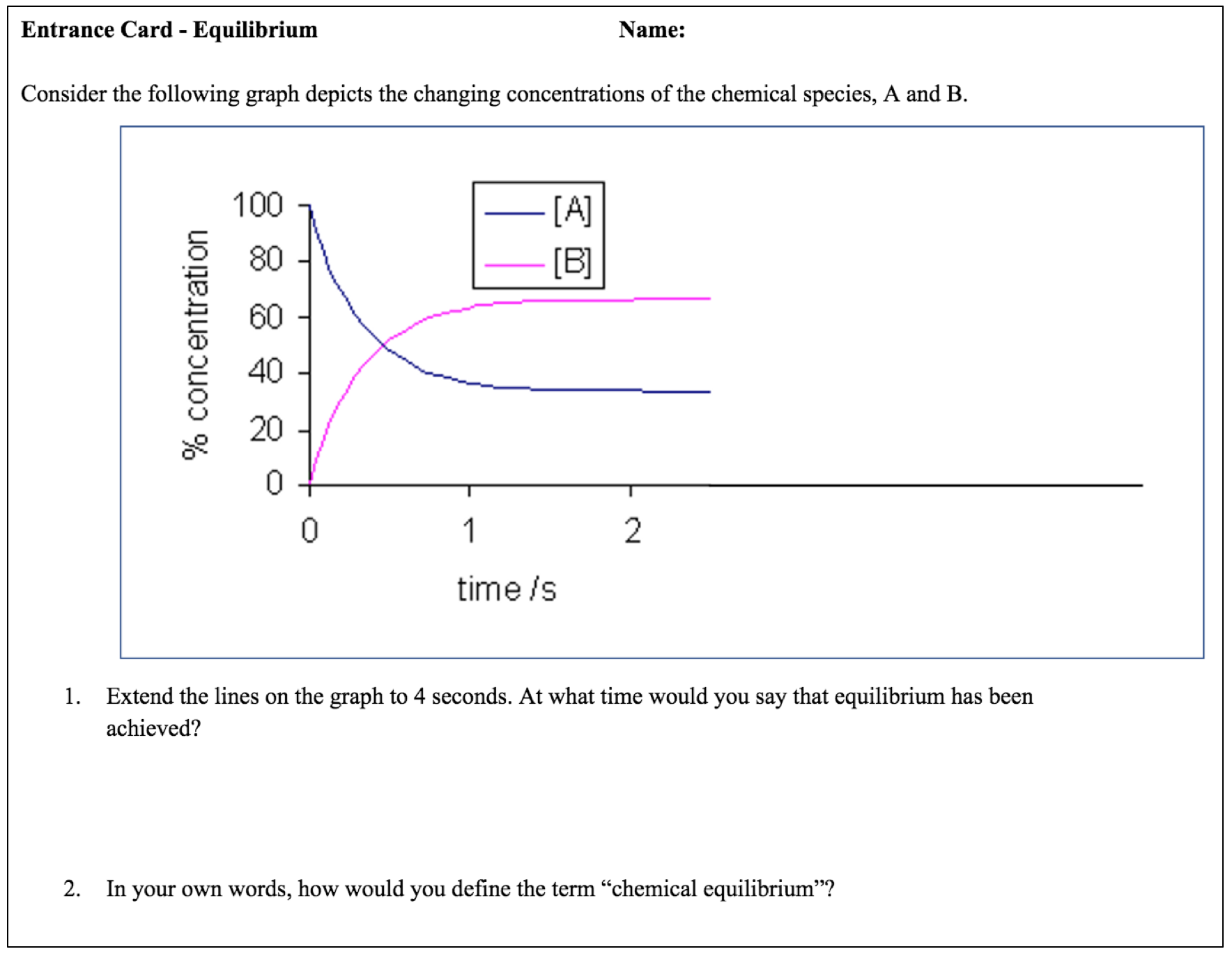 Generally, students are very eager to throw “snowballs” at each other; thus, it’s important to set the ground rules and ensure active and complete student participation.

I had each student make two “snowballs." Additionally, I recommend a loosely packed “snowball” (figure 2) because they won’t fly as far or hit other students with too much force. For the first match, students were evenly divided on the product and reactant side. All the snowballs were placed on the reactant side, and data were recorded for T = 0 s. I directed the student through six rounds, recording the number of “snowballs” on both sides after each round (figure 3). 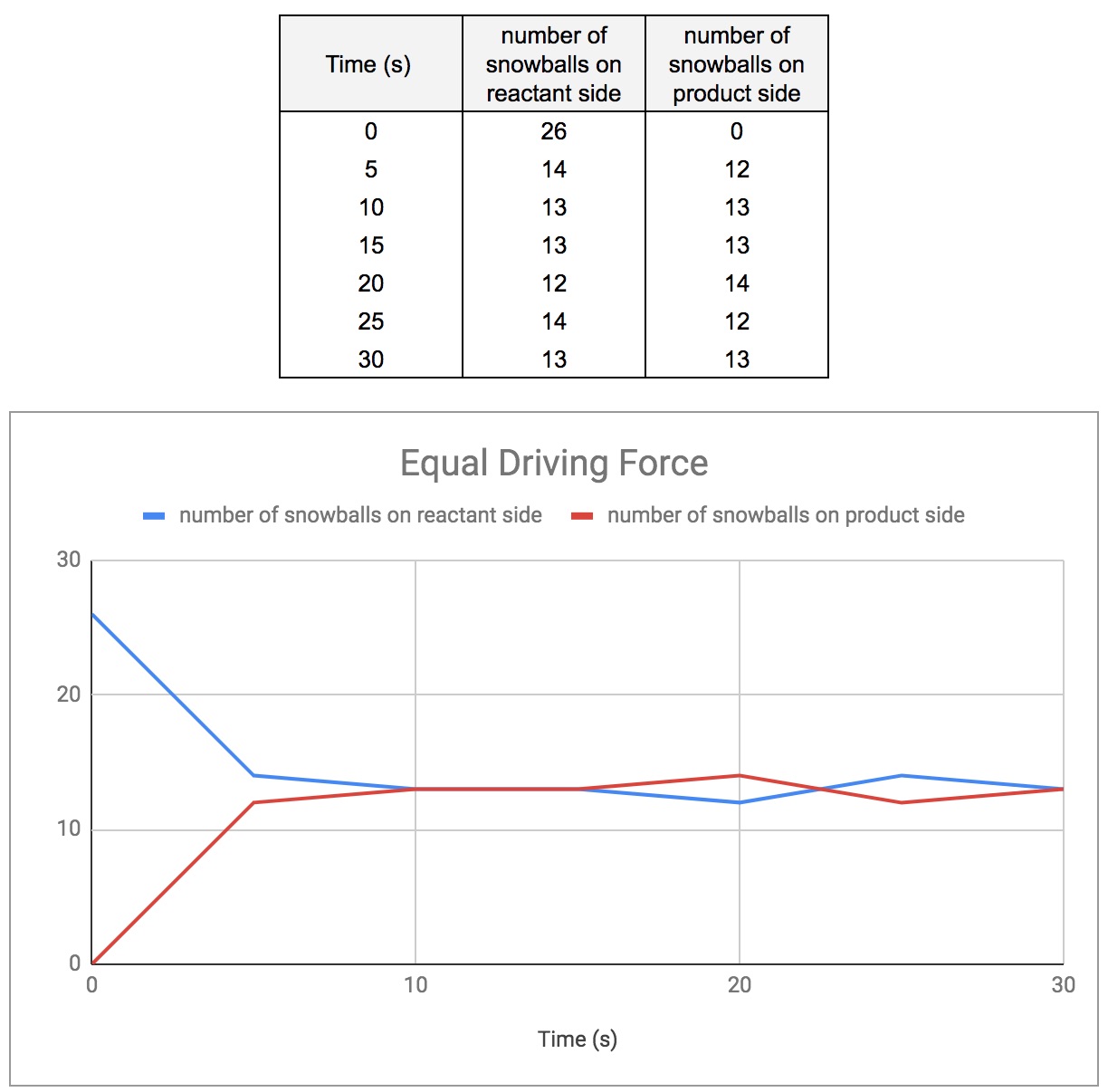 Finally, I had the students switch sides. This time, there were only two students on the product side, and they accomplished similar results as when they were on the reactant side (figure 5). After presenting this concept and expression to the students, I have them calculate the average concentrations and then the value of the equilibrium constant for each match (figure 6).

Figure 6: Keq for each match

With these results, we can clearly distinguish between different values of Keq.

If K = 1, then the concentrations of products and reactants are equal

If K > 1, then equilibrium favors the products

If K < 1, then equilibrium favors the reactants

Scientific models can be beneficial in correcting misconceptions related to foundational concepts in chemistry. Dynamic equilibrium is an especially important concept where misconceptions arise in students' understanding of the topic. This model is an excellent way to correct those misconceptions and develop students conceptual thinking about equilibrium.

Download the Power Point I use during this actiity.