During a recent trip to Reston, VA, to the 26th Annual Green Chemistry and Engineering Conference, one of the authors paid a visit to the nearby headquarters for the United States Geological Survey. Not many outdoor exhibits were seen at the location,1 but there were several flash rocks in the landscaping stones. Flash rocks are stones that produce flashes of visible light when rubbed or struck together. The stones are typically composed of many quartz crystals, such as those found in the metamorphic rock quartzite.2 Video 1 shows the demonstration in action. Two smooth quartzite stones are struck together with glancing blows, and the flashes are visible in dark environments. These flashes are often bright enough to be viewed in a dark chemistry classroom.

Video 1: Two pieces of quartzite are struck together with glancing blows. When this happens, some of the quartz crystals in the rocks break, and the breaking of chemical bonds cause electrical charges to build up. These discharge within the rocks to create brief flashes best viewed in a dark room. ChemDemos YouTube Channel (accessed 7/5/2022)

Read Dean Campbell's blog post, Finding Flash Rocks, for a description of the origins of flash rocks and tips on how to find them, making connections to some of their properties.

The light flashes in the quartzite are due to a phenomenon called triboluminescence. In triboluminescence, light is produced when materials are broken. This phenomenon is complex and not completely understood.5-7 One commonly given explanation is that when two flash rocks are struck together, some of the quartz crystals are fractured and chemical bonds are broken. Different areas of the fracture surface might have different charges (positive or negative) because of uneven distribution of electrons. When the charges return to their original state, the transfer of electrons could excite nearby air molecules and produce a flash of light.5-7 This phenomenon is illustrated in Figure 1, where a portion of the upper part of the quartz structure has been broken away from the lower structure. The brick pegs in the lower part of the quartz structure that were to be connected to the upper structure have been highlighted with glow-in-the-dark paint to represent broken chemical bonds. 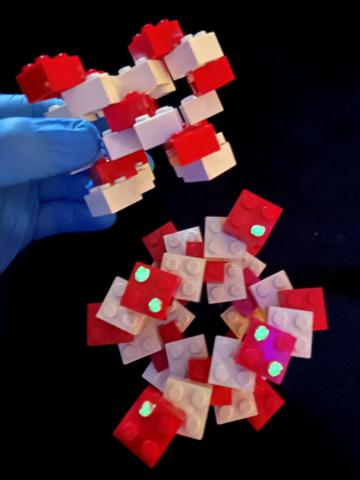 Figure 1: LEGO brick model of the quartz structure. The upper part of the model has been “broken away” from the lower part, and the brick pegs where those structures are supposed to be in contact have been painted with glow-in-the-dark paint to represent broken bonds.

The challenge with using this explanation is that flash rocks can produce flashes of light repeatedly when struck together again and again, and this seems to conflict with an explanation built on mechanical failure of the material. However, close examination of the flash rocks after striking them together reveals a powdery residue that is probably quartz. Flash rocks do not last forever, but probably last a long time.

The “greenness” of the flash rocks demonstration can be considered from the perspective of the Twelve Principles of Green Chemistry.8 Other demonstrations of triboluminescence include breaking Wint-O-Green Lifesavers, breaking crystals of a variety of compounds, or even unrolling tape.6 In all cases, intra- or intermolecular attractions are being broken. However, these naturally-occurring flash rocks are difficult to wear down and can be reused. Looking at the Twelve Principles:

Quartz also has well-known piezoelectric properties.9-11 Piezoelectric materials can directly convert mechanical stress into electrical charge, and vice versa. LEGO brick models can be used to describe piezoelectric behavior. Directions for the constructions of these models are described in more detail in the Supporting Information. In this model, negative ions or more electronegative atoms are represented by white brick clusters and positive charges or less electronegative atoms are represented by red brick clusters. In Figure 2 (LEFT), the brick clusters are arranged in a hexagon to represent piezoelectric materials in unstressed conditions where there is no net charge buildup.9,12 It is important to note that even though this model has a hexagonal symmetry, as does quartz, real quartz has a more complex molecular structure. The center of charge for the negative charges is represented by a white circular bottle cap connected to the white brick clusters by rubber bands. The center of charge for the positive charges is represented by a red circular bottle cap connected to the red brick clusters by rubber bands. When unstressed, any ion charges or electric dipoles represented by this model are in balance. The center of negative charge is right over the same location as the center of positive charge. However, this model is not centrosymmetric: each positive charge is on the opposite end of each negative charge in the structure. When piezoelectric materials are stressed, electric dipoles and centers of charge shift with respect to each other. For example, when the hexagon model is distorted, as shown in Figure 2 (RIGHT), the white and red brick clusters shift positions, and the centers of negative and positive positive charges shift apart from each other. This produces a net dipole moment in the structure, producing charge buildup at surfaces of the structure. Video 2 shows the compression of this model in action. The piezoelectric properties of quartz, which invokes the concepts of dipole moments, can be used as part of chemistry classroom discussions of dipoles in the context of molecular structures.

Figure 2: Hexagonal LEGO brick model of piezoelectric structure in (LEFT) uncompressed and (RIGHT) compressed form. When the structure is compressed, the centers of positive and negative charges move apart from each other to produce dipoles and charges on the surface of the structure.

Figure 3: Square LEGO brick model of piezoelectric structure in (LEFT) uncompressed and (RIGHT) compressed form. When the structure is compressed, the centers of positive and negative charges do not move apart from each other and charges are not produced on the surface of the structure.

In a classroom setting, connections can be made between flash rocks and concepts associated with breaking and forming chemical bonds. Breaking bonds is endergonic and the energy comes from the kinetic energy of striking the rocks together. Light energy is released as electrons excited by the fracturing move into more thermodynamically stable positions. The green chemistry aspects of this demonstration can be brought up to stimulate discussions of the Twelve Principles of Green Chemistry. Finally, the LEGO models of piezoelectric and nonpiezoelectric materials can be used to connect these properties to concepts such as dipole moments. Directions for building those models are given in the Supporting Information.

Safety Goggles should be used when working with the flash rocks demonstrations as there is always a possibility of rock chips flying from the stones when they are struck together. Striking the rocks together could also produce small bits of quartz that could be inhaled. Exposure to quartz dust could raise a person’s risk of contracting silicosis, so breathing protection such as a mask is recommended.13 Always wash your hands after completing demonstrations.

Acknowledgements This work was supported by Bradley University and the Mund-Lagowski Department of Chemistry and Biochemistry with additional support from the Illinois Heartland Section of the American Chemical Society. The material contained in this document is based upon work supported by a National Aeronautics and Space Administration (NASA) grant or cooperative agreement. Any opinions, findings, conclusions, or recommendations expressed in this material are those of the author and do not necessarily reflect the views of NASA. This work was supported through a NASA grant awarded to the Illinois/NASA Space Grant Consortium.

Students who demonstrate understanding can analyze geoscience data to make the claim that one change to Earth’s surface can create feedbacks that cause changes to other Earth systems.

More information about all DCI for HS-ESS2 can be found https://www.nextgenscience.org/dci-arrangement/hs-ess2-earths-systems.

Analyze geoscience data to make the claim that one change to Earth's surface can create feedbacks that cause changes to other Earth systems.

Examples should include climate feedbacks, such as how an increase in greenhouse gases causes a rise in global temperatures that melts glacial ice, which reduces the amount of sunlight reflected from Earth’s surface, increasing surface temperatures and further reducing the amount of ice. Examples could also be taken from other system interactions, such as how the loss of ground vegetation causes an increase in water runoff and soil erosion; how dammed rivers increase groundwater recharge, decrease sediment transport, and increase coastal erosion; or how the loss of wetlands causes a decrease in local humidity that further reduces the wetland extent.

Assessment does not include calculating the total bond energy changes during a chemical reaction from the bond energies of reactants and products.

Emphasis is on the idea that a chemical reaction is a system that affects the energy change. Examples of models could include molecular-level drawings and diagrams of reactions, graphs showing the relative energies of reactants and products, and representations showing energy is conserved.