First and foremost, I would like to give a shout out to Bob Worley for a couple of reasons. He just won a well deserved award for science teaching, the Royal Society of Chemistry 2021 Excellence in Secondary and Further Education Prize. He has done a remarkable job of supporting and developing microscale techniques and has always been helpful with suggesting great demonstrations and labs. (Please check out his website, his YouTube channel, the CLEAPSS YouTube channel and the CLEAPSS site. It was due to Bob that I attempted the following with my students. 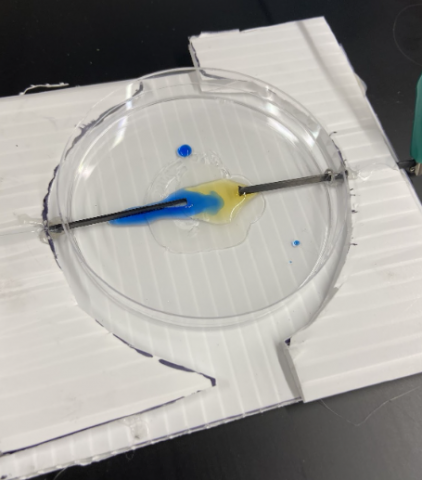 We were just getting into bonding. I like the idea of using electricity to break the bonds apart in water. We try to get on the discussion about evidence of what is the nature of the chemical bond and the role of electrons. It helps to have some evidence. Evidence is usually collected with a Hofmann apparatus. The platinum electrodes were not available so I tried to improvise with a set up inspired by an idea from CLEAPSS (UK). I used a plastic petri dish with two carbon electrodes. I also used plastic cardboard as my base (see figure 1). 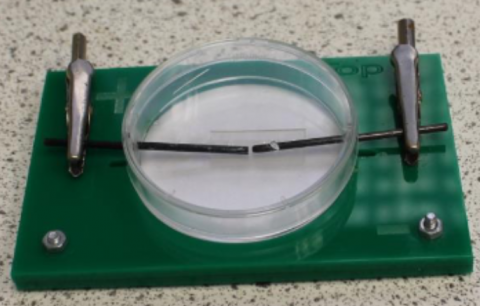 My students started seeing bubbles and noticed there were more bubbles on one side than on the other. It is not exactly a two to one ratio with carbon electrodes but students started to get the idea that a chemical change was occurring. They added a little bromothymol blue and started seeing a side that was acidic and one that was basic. We used some models to show the possible result of H+ and OH-. Could the current be responsible for breaking this apart? Finally, we examined it through an FLIR camera with infrared imaging. Heat was present. Could this be due to the chemical reaction or the current passing through the system? With multiple forms of evidence, a chemical reaction might be occurring.

We were able to introduce evidence for bonding along with evidence for chemical reactions in a extremely short amount of time. Students were able to wipe off the petri dish and repeat the experiment multiple times. This freedom led to more experiments and more questions. It was a nice teachable moment that I was glad to stumble upon.

Our next attempt at microscale experiments was to look at the melting points of some ionic and covalent compounds. A true  melting point apparatus is a bit out of our reach but we improvised with some aluminum foil on a hot plate. Students were able to get an idea of a range of melting points. It provided more questions than answers. Do all ionic compounds have high melting points?

This has been a weird year. I feel as if everyone has been really thrown off the tracks with the pandemic. It is almost like trying to re-learn how to teach and learn. The microscale experiments have been a huge help and a step in the right direction. Thanks to Bob again, CLEAPSS and the microscale community for trying to foster science inquiry and wonder during a difficult time!