The Search for the Final Element 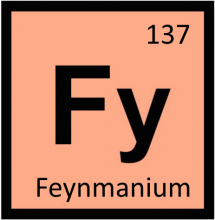 Now that these four elements have been officially recognized, the period table is complete all the way through the 7th row. This achievement brings to mind a natural question: Just how high in atomic number can the periodic table go? Is there a limit to how large elements may become?

Perhaps you have heard the claim that elements with Z > 137 cannot exist. This argument can be justified in a fairly simple way using the Bohr model of the atom, a bit of physics, and some algebra (see Appendix). Upon doing so, it can be shown that the velocity, v, of an electron in quantum state, n, of an atom is:

Where c is the speed of light and

is the fine structure constant (e is the elementary charge, h is Planck’s constant, and e0 is the permittivity of free space).

Using Equation 1, we see that atoms with Z > 137 require electrons in the first shell (n = 1) to exceed the speed of light1.  Because electrons have non zero rest mass, they cannot exceed the vacuum speed of light according to Einstein’s theory of relativity. Thus, atoms with Z > 137 cannot exist. Legend has it that the great physicist, Richard Feynman, first argued that element 137 was the largest possible element2. It is either this folktale or Feynman’s fascination with the fine structure constant that have led to the unofficial naming of the yet to be discovered element 137 as “Feynmanium”2. Martyn Poliakoff at the Periodic Table of Videos happens to think that the newly recognized element 117 should be named Feynmanium3, but I’m hopeful they will save this designation for element 137 – if it is ever discovered.

Of course we know that quantum theory has improved upon the Bohr model, so it might not come as a surprise that current theoretical investigations have placed a limit on atomic size at Z < 173 or thereabouts2,4. Nevertheless, I plan on sharing these ideas with my students in the near future. I am hopeful that my students will find this supplemental discussion to be as interesting and imaginative as I have. As a final note, the Periodic Table of Videos has posted a video on undiscovered large elements with Z > 118 for those wishing to explore this concept further5.

1. Another interesting result of Equation 1 is that electron speed increases with Z. In fact, 1s electrons in 6th and 7th period elements reach speeds that are significant fractions of light speed. The relativistic speeds achieved by electrons in heavy elements results in substantial chemical effects. Two notable examples are the yellow color of gold and liquidity of mercury at room temperature. For more information on these fascinating relativistic effects in chemistry, see

1. Relativistic Effects and the Chemistry of the Heaviest Main-Group Elements by John S. Thayer.

2. Would element 137 really spell the end of the periodic table? Philip Ball examines the evidence.

3.  A suggested Periodic Table up to Z ≤ 172, based on Dirac-Fock calculations on atoms and ions by Pekka Pyykko.

5.  Bigger Periodic Table, Periodic Table of Videos. It is interesting to note that the paper cited in reference 3 above is shown in this video!

In the Bohr model, electrons are assumed to exist in fixed orbits around the nucleus of the atom. In other words, electrons are fixed at a distance, r, from the nucleus. In this case, an electron orbiting the nucleus would have a centripetal force, F, equal to:

Where m and v are the electron mass and velocity, respectively. This force must be equal to the coulombic (electrostatic) force between the electron and the nucleus:

Where Z is the nuclear charge, e is the elementary charge, and e0 is the permittivity of free space. Setting the centripetal and electrostatic forces equal to one another:

Using Equation 3 to solve for the velocity of the electron squared, we find:

A central assumption of the Bohr model of the atom is that the angular momentum of the electron, L, is quantized:

Where h is Planck’s constant and n is an integer. Solving Equation 5 for r:

If we substitute the right hand side of Equation 6 into Equation 4, we find:

Dividing both sides of Equation 7 by v yields:

We now multiply the top of bottom of Equation 8 by the speed of light, c:

We notice that Equation 9 contains the fine structure constant:

Thus, substitution of the fine structure constant into Equation 9 yields the equation we seek:

Students who demonstrate understanding can use the periodic table as a model to predict the relative properties of elements based on the patterns of electrons in the outermost energy level of atoms.

Students who demonstrate understanding can use the periodic table as a model to predict the relative properties of elements based on the patterns of electrons in the outermost energy level of atoms.

Assessment is limited to main group elements. Assessment does not include quantitative understanding of ionization energy beyond relative trends.