In Chemical Mystery #7, a can of Coca-Cola was observed to sink in one container of water and yet float in another! This trick made use of the fact that the density of water changes with temperature. See the video below. For those that are interested, more information about this experiment can be found below the video.

Unopened cans of Coca-Cola have densities that are very close to the density of water. However, the density of cans of Coca-Cola will vary from one can to another. Although I have not tested this, it is my hypothesis that the variation in densities of unopened cans of Coca-Cola results primarily from variations in the volume of gas contained in the head space of each can. Unopened cans with larger headspace gas volumes will have lower densities than those with smaller headspace volumes (Figure 1). I think a great small research project would involve having students create and conduct tests to determine if this hypothesis – or any other explanation – is consistent with experiment. 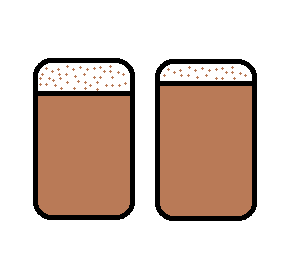 Because of this variation, and because cans of Coca-Cola are very close to the density of water, some cans of Coke float – while other cans sink – in water. This observation alone makes for a great chemistry demonstration: add two separate cans of Coke to a single container of water (Figure 2). One can floats, while the other one sinks! Now how does that happen?

Do cans of Coca-Cola float or sink?

Figure 2: A Coke can with a slightly lower density floats in water at room temperature (left). However, most cans of Coke sink in water (right).

Now for the solution to Chemical Mystery #7: If we take the above demonstration a bit further, we can place the two cans of Coke into a container of very warm water. In this case, both cans sink (Figure 3). That’s because the density of water varies with temperature, becoming less dense as it is warmed. In the experiment filmed in the video above, one container of water was at 23oC (D = 0.997 g mL-1), and the other container of water was at 37oC (D = 0.993 g mL-1). I have never observed a can of Coca-Cola to float in very warm water, so essentially all cans of Coca-Cola have densities higher than 0.993 g mL-1. However, I have found that roughly 10% of Coca-Cola cans float in water at room temperature. Thus, about 10% of Coca-Cola cans have a density somewhere between 0.993 and 0.997 g mL-1.

Figure 3: All unopened Coke cans sink in very warm water, which as a density that is lower than water at room temperature.

A word of warning here: if you plan to do this experiment in class, be certain to first find a can of Coke that floats in room temperature water. Occasionally I will buy an entire 12 pack of Coke cans and find that not one in the whole batch floats in room temperature water! It is helpful to use cold water (because of its slightly higher density) to identify the rare, floating Coke cans with lower densities. Also, be sure that no air bubbles become trapped underneath the cans. If this happens, the experiment won't always work as planned.