Solution to the M&M Mystery? Since posting about this experiment, several ChemEd X readers1 and I have been actively discussing this experiment. Specifically, we have been trying to figure out why the colors stay in very distinct regions with sharp, well defined lines (Figure 1). Figure 1:  Formation of distinct regions of color when water is carefully poured onto a plate of M&M’s candies.

Osmosis, polarity, density, emulsion formation and colloid formation were all discussed as possible processes involved in the formation of these clear-cut areas of color.  However, there is one idea we have not yet discussed, and I think it may be what is responsible for keeping the colors apart:  electric charge.

If all the dyes have the same charge, then certainly they should repel each other to some extent.  The repulsion of the like charges on these dyes would provide a very simple explanation for why the dyes stay in their own distinct region of space.  After all, like charges repel.

After stumbling upon this idea, I checked the ingredients list of M&M’s milk chocolate candies.  Upon doing so, I noticed that they contain several different food dyes (Blue 1, Blue 2, Yellow 5, Yellow 6 and Red 40).  Upon looking up the structure of these dyes online, I discovered that all of these dyes are indeed negatively charged ions!

I decided to see if I could try a simple experiment to demonstrate the fact that food dyes are negatively charged.  I formed a gel using water and the polymer found in baby diapers (you can learn more about how to make such gels here; fast forward the video to about 1:10).  Side note:  I also mixed in a pinch of baking soda.  I poured the gel inside a small Tupperware container, and placed a piece of aluminum foil at opposite sides of the container.  I placed one drop of red food dye (Red 3 and/or Red 40, according to the manufacturer) in the middle of the Tupperware container.  Next, I connected six 9V batteries in series and used aluminum foil to connect the terminals of the battery assembly to the foil pieces on the opposite sides of the container (Figure 2): Over the course of a half an hour, the food dye had migrated to the positive pole of the battery assembly (Figure 3). I next decided to try the same thing, but use M&M's candies instead.  This time I formed the gel in a large glass dish, placed aluminum foil on the ends of the dish and added M&M’s in a single line down the middle (Figure 4): The battery assembly was attached (Figure 5). 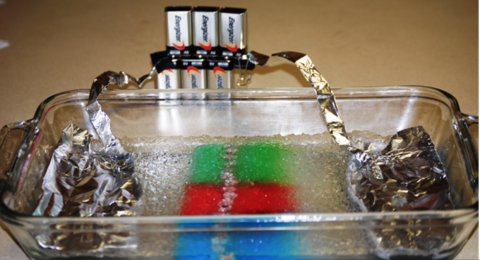 Figure 5:  Experimental set up used to demonstrate that food dyes in M&M's candies are negatively charged.

And over the course of an hour, the dyes in the M&M’s had migrated to the positive pole of the battery assembly!

So it looks as though the dyes in M&M’s are all negatively charged, and this characteristic of these dyes seems to me to be a good explanation as to why they avoid mixing (Figure 1).  What do you all think?

1.  Ben Barth, Erica Jacobsen, William Farmer, Lowell Thompson, and Mark Langella.  Both Lowell Thompson and I have had our students investigate what might be causing this non-mixing effect.  You can read about the explorations of Lowell’s students here.

It's a nice possible solution. But I'm not fully convinced yet.

It's a shame it are sufonic acid residue's (can't remember the correct name for what's left when a acid gives away it's proton, in English...). Because if I recall it right, whe can't protonate it in water. So if we repeat th original experiment in an acidic environment, we should see less colour dissolve and we might see easy mixing...

But we can use salt water to dissolve the m&m's in. It should mix better. Or just on one side of the plate add salt.

Or maybe it is possible to replace the sulfonic acid groups with hydroxy-groups by dissolving it in a bit of strong lye-solution. I've no idea what it would do to the colour or if it is even possible, but if afterwards the colours do mix (if the solute anymore), then we can say: "Yes, Tom solved it."

But enough nagging, I really like your setup. I think I'm gonna use it for a practical test in my classes.

If I find the time, I'll most certainly will try to repeat your experiment.

I love the set up also. Even if this is not the solution, I am inspired by the set up and the thought process. I hope one of us can come up with an inquiry lab/lesson to publish at ChemEdX. Thanks, Tom!

I tried this experiment with Skittles and wondered if the movement of colours when the sweets are placed in the water reflects an attraction, or a repulsion. We tried setting up the experiment, and then adding a washed ("colourless") Skittle into a coloured area. The addition of the washed sweet seemed to repel the dye already in the water. Is the dye moving into positions which maximise the distance from the "inner" part of the sweets? (I am new to this experiment and associated discussion, so hope I'm not re-hashing old ideas.)

Welcome to the conversation, Marion! I like the experiment you have tried. It seems you have found something in the white part of the candies that repel the dyes. Your result makes me wonder if some of the musings of Alfredo Tifi and Mark Langella might be on the right track. You can read about Alfredo and Mark's ideas (as well as other ideas) in the comments sections at this link: http://www.jce.divched.org/blog/fun-m-ms.

I just got done repeating Marion Maw’s experiment.  I rinsed the dye off of several M&M’s candies, leaving the white layer of material just beneath the outer dye as intact as possible.  Next, I repeated the M&M’s experiment using some of these “washed” M&M’s and also some “unwashed, intact” M&M’s candies.    The picture below shows the results of this experiment:

The non-mixing effect is observed in the absence of dyes!  Because the non-mixing effect is observed in the absence of dyes, my hypothesis that negative charges on the dyes repel each other is incorrect.  However,   Marion’s experiment is consistent with similar proposals given by Mark Langella, Alfredo Tifi and William Farmer.  Mark, after viewing Erica Jacobsen’s video, suggested that water stratification might be responsible for the non-mixing effect.  In water stratification, distinct water layers with different densities (and/or other different properties such as temperature) form.  It is known that these distinct layers of water are greatly inhibited from mixing inhibited due to their different properties.  Having performed this experiment several times, I have noticed that the white material from the M&M’s candies spreads out along with the dyes.  Some of this white material dissolves, while some of it does not.  Nevertheless, this white material could easily serve to produce distinct regions of water with different properties. When these different regions of water spread out horizontally along the plate and meet each other, they resist mixing due to an effect similar to what occurs in water stratification.

What I like about Mark, Alfredo, and William’s explanation is that it has experimental support (Marion’s experiment and Erica’s video).  For now, I think water stratification is the best explanation for what is going on in this experiment.  What do you think?

As an employee of Mars, I spent my first 4 years putting the candy coating on M&Ms.  The outermost layer of the coating is carnauba wax to provide the distinctive shine.  It may be that the color particles become coated with this wax during dissolution, precluding mixing of the colors...even with the "washed" candies, which would no longer contain the wax and, therefore, stay separate from the wax coated dyes.