There Is More to the Whoosh Bottle

When trying to convince our students of the pressure we are constantly under from the atmosphere, we typically resort to a favorite demo or two that demonstrates this idea with some sort of dramatic flair. Though a variety of demos exist, I recently tried one that I had never done before but will most certainly continue to use in the future.

At some point in time during my Gas Laws unit, I inevitably get to the idea of pressure and, as a result, remind students of the vast ocean of air they are continuously at the bottom of. Though students willingly accept statements like, “approximately 15 pounds for every square inch are constantly pushing on you from all directions”, the lack of immediate curiosity and awe seems to indicate that they don’t fully appreciate, or even comprehend, what this amount of pressure is really like. So, sometimes I crush a can—that is pretty cool. Other times I place a candle in water and cover it with a glass jar only to watch the outside water get pushed up into the glass jar—that is pretty cool too! But still, I always feel like the majority of the class isn’t very impressed. After all, I built it up as this enormous amount of pressure and all they got was a crushed can and a few inches of water in a glass jar? Though I think both demos are awesome, I find myself wanting more enthusiasm. 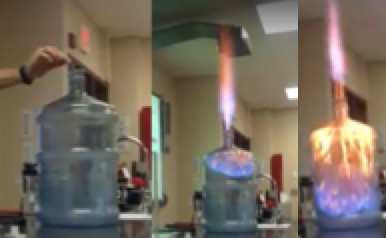 So I decided to step it up a bit this year with a demo that was easily repeatable, cheap, and displayed atmospheric pressure with a bit more drama. Many of you may already know this as the Whoosh Bottle demo due to the immense whoosh-like sound it makes when you light the alcohol inside a 5-gallon water bottle. I have used this demo in the past for topics like exothermic reactions, combustion reactions, and even rates of reactions which involves multiple bottles with different concentrations of alcohol. However, I had never even thought that it could also be used to demonstrate atmospheric pressure and even Charles’ Law! The cool thing is, this point in the year, all my students had already seen the Whoosh Bottle demo, even if they had a different chemistry teacher. However, the demo was always over once the reaction was complete. Because of this, I could totally surprise them by adding an equally dramatic twist to the end. 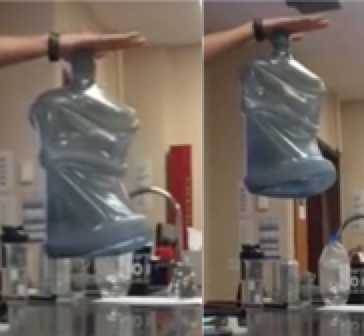 A few things I want to mention about the demonstration

Though I hadn’t originally planned on creating an extension to this demo, I thought it made sense take advantage of the opportunity and make the most out of their vulnerable curiosity by creating an improvised Claim, Evidence, Reasoning activity. Basically, students were tasked with constructing a scientific explanation for the demo based on their still-limited knowledge of gas laws and atmospheric pressure. By the next period, I had made a more formalized activity and posted it to our LMS (Schoology) in the form of a discussion thread. In doing so, students were able to collaborate on their potential explanations and, once posted to the discussion forum, were able to see other explanations from their classmates.

Below are some examples of student CER explanations. Initially, accuracy wasn’t important. I just wanted to know what they thought. Doing this allowed both the students and myself to see the variety of ideas and even misconceptions that students had.

The whole thing was a blast and the fact that it spontaneously generated an activity reminded me of how improvised teaching can really be. It doesn’t need to be so structured with every single minute mapped out all the time and no room for departure from the plan. The best part was that it was my students’ own curiosity that inspired me to delay everything else I had planned for the period and just run with it. Throughout the rest of the unit, I was able to reference that demo when talking about atmospheric pressure or Charles’ Law and I knew that the vast majority of my students would have a vivid memory of what I was asking them to form new connections with.

By the way, the large amount of energy released from the reaction in the form of the flame (you know, the whole reason it’s called the Whoosh Bottle) wasn’t even talked about. Students just wanted to know about the crushing, suction to my hand, and why it appeared to quickly “reflate.” Never have one of my pop can or candle in water demos been able to produce similar engagement and stimulate curiosity to such an extent.

If you think this is something you would like to do, please consider the safety issues surrounding it. I am far from a “demo guy” but this is one that I will most definitely use in the future. Feel free to let me know any suggestions you may have for extensions or potentially better ways to execute the demo.

We did that by getting a one hole stopper that fits on the bottle, putting a balloon on the inside. Just after ignition put balloon inside. Balloon will fill with air as pressure equalizes.

Real vs Ideal - Do Students "Get It"? 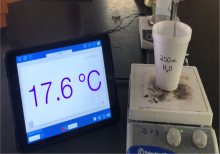 Developing a Model for Enthalpy of Solution—Reframing the Approach 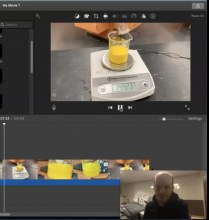