Self-inflating balloons based on the chemical reaction between citric acid and baking soda can be used to illustrate multiple chemical principles.1,2,3 One variety, marketed as Wack-A-Pack balloons, have been sold in local Dollar Tree stores as St. Valentine’s Day novelties. As of this writing, they are currently $1.25 for a four-pack of balloons. We have purchased many of these balloons over the years for use in classroom demonstrations and chemistry-related outreach events. Each Wack-A-Pack consists of an outer sealed pouch containing a folded and sealed balloon. The balloon contains loose sodium hydrogen carbonate powder and a small inner pouch containing citric acid solution. When the entire Wack-A-Pack is struck by a hand or a foot (“whacked”), the innermost pouch breaks and releases the citric acid solution onto the sodium hydrogen carbonate, Figure 1. 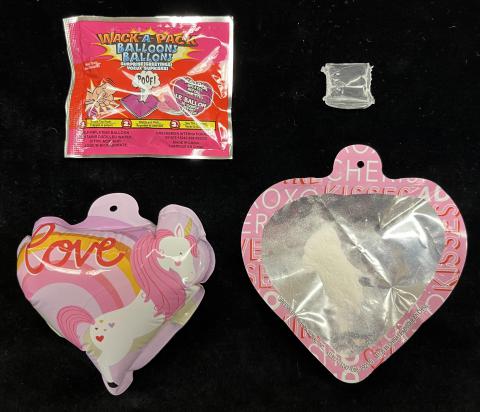 Inflated Wack-A-Pack balloon and some of its components CLOCKWISE FROM UPPER LEFT: outer packaging, inner pouch, inflated balloon, balloon sliced in half.

The reaction of the citric acid and the sodium hydrogen carbonate produces carbon dioxide gas which inflates the balloon.

Usually, enough pressure from the carbon dioxide causes the outer pouch to pop open and release the balloon, although sometimes the outer pouch needs a little help to open. With a little information about the quantities of reactants and other aspects of this process, chemical principles can be covered in a bit more depth.

Incorporating that density (d), and the ambient pressure (P) and temperature (T), into the equation P × Mm = d × R × T, gives the molar mass difference (Mm) between the gases.4 Using the data from the three trials, a difference of 16.13 g/mol was measured. For comparison, the average molar mass of the air in the lower atmosphere is 28.96 g/mol,5 which is 15.05 g/mol lower than the carbon dioxide molar mass of 44.01 g/mol.

If the excess gas pressure in a freshly inflated balloon can be released quickly through a narrow hole, the balloon can be propelled in the opposite direction of the hole and behave a bit like a rocket. The challenge is to make a small hole in the balloon without actually pushing on the balloon and moving it. However, heat from a flame placed near the balloon can weaken the plastic until it fails. The carbon dioxide that quickly vents from the balloon can provide thrust to move the balloon. Video 2 shows a Wack-A-Pack balloon hanging from a paper clip tied to a piece of dental floss. The heat from a butane lighter placed near the balloon caused a small hole to form, releasing carbon dioxide and causing the balloon to spin. This demonstration can be connected to other rocket or space-related demonstrations.6 Another space-related connection is the fact these balloons are inflated with carbon dioxide, which is the major component of the atmospheres of Venus and Mars,7 and a minor yet environmentally significant component of Earth’s atmosphere.

In addition to the gas pressure aspects of the Wack-A-Pack balloons, there are thermochemical aspects to consider. As others have already noted, the chemical reaction itself is clearly spontaneous, with a negative change in Gibbs free energy.2 The reaction proceeds after initiation without outside intervention. The initiation of the process, the “whack” could be a sort of analogy for the activation energy required to get the inflation process started. However, details like transition states might be beyond the scope of the analogy. A readily observable thermochemical phenomenon with the Wack-A-Pack balloons is that they develop a cold spot as they inflate that can be felt with fingers as the balloon is held. This appears to be due to the dissolution of the sodium hydrogen carbonate in water and its reaction with the citric acid both being endothermic. Video 3 shows a Wack-A-Pack balloon inflating while being viewed with an infrared camera.8 The bottom corner of the balloon was notably cooler where the citric acid solution and sodium hydrogen carbonate were actually combining.

Another chemical topic to consider is the “greenness” of these demonstrations from the perspective of the Twelve Principles of Green Chemistry, which yields some positive and some negative outcomes.9 The carbon dioxide-producing reaction itself, based on the relatively safe reactants sodium hydrogen carbonate (baking soda) and aqueous citric acid, seem to mesh well with principles 3. Less Hazardous Chemical Synthesis, 5. Safer Solvents & Auxiliaries, and 10. Design for Degradation. There is, however, definitely room for improvements in these demonstrations with respect to principles 1. Waste Prevention and 10. Design for Degradation. There seems to be an excess of sodium hydrogen carbonate in the Wack-A-Pack balloons, and it is unclear whether or not that excess is necessary to help ensure that the balloons inflate in a timely manner. Perhaps more significant is the use of all the plastics in the balloons and the packaging. Raman microscopy performed in our lab of the balloon and its packaging indicates that these materials are comprised of polypropylene, polyethylene terephthalate, and possibly other polymers. It would be desirable to switch to materials that are less persistent in the environment at the end their useful lifetimes.10 Despite this need for improvement, these low-cost yet eye-catching novelty balloons can be used to illustrate multiple chemical principles associated with moles, gas laws, thermochemistry, and Green Chemistry.

Safety Precautions, including proper personal protective equipment such as goggles, should be used when working with demonstrations. Avoid spilling strong acid solutions on skin or clothing. All solution containers should be clearly labeled. Do not set the plastic balloons on fire with the butane lighter. Always wash your hands after completing the demonstrations.