Going from Cookbook to Inquiry...Messy but worth it. 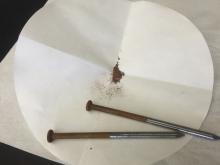 WHAT AM I DOING TO HELP KIDS ACHIEVE?
HOW DO I KNOW WHEN THEY ARE THERE?
WHAT IS THE EVIDENCE?

Cooking in Chemistry…..What do you do when you have a lab that you are required to do with students but is just a little too much “cookbook”? Odds are that our students will have on average during their life at least ten different careers, two or three of these have not even been invented yet. They need to be able to solve problems in which they have to do something besides ask Siri or look in a book. A cookbook type lab came up and I could not bring myself to do it as is. One of my definitions of “inquiry” is having a question or process on a lab that students are not able find the answer on the internet. In this particular lab, students find the mass of an iron nail, place it in a solution of copper (II) chloride for 20 minutes, recover the copper and mass the nails again. They can find the moles of iron used and the moles of copper formed. Students examine two balanced equations. One has iron reacting with copper (II) chloride to form iron (II) chloride and copper. The other reaction shows the formation of iron (III) chloride and copper. The mole ratios of iron to copper in the first balanced reaction is one to one and in the second reaction the mole ratio of iron to copper is two to three. Students need to figure out which reaction is occurring in the experiment. This experiment was used to introduce the concept of moles. Most students had some concept of balanced reactions but it was limited.

The Land of Inquiry….There was one possible way to make this more of an “inquiry” type lab.  Everything stayed the same, except for the order. I first had the students collect the data without telling them the purpose of the experiment. We looked at the balanced equations and I went over what they meant.  Again, they had only limited exposure at this point to the balanced equation. Now here is the problem they were given….”How are we supposed to know which balanced equation represents what happened in the lab based on the data you collected?”. Students now had a “need to know” mentality. After brainstorming, they decided that we had to count the atoms somehow. Moles were introduced at this point with some activities and a POGIL excercise.  Finally, students went back to check the mole to mole ratio and come up with a conclusion and put the whole lab in a trifold.

Inquiry is mess….Did it work? Yes but it was messy. Looking back, I think I asked the students to bite off more than they could chew. It would have been one thing to try to just lead them to the mole to mole ratio but we also went back and talked about balanced reactions and single displacement reactions. Did I mention I had them do particulate drawings also? Frankly, I got the sense that it was too much. I should have broken it down and had the main problem be the mole to mole ratio. I just got the feeling that for the students they were trying to assimilate too much information(moles, particulate drawings, balanced equations…) at a given time.

Why bother?  A few years ago I had the honor of working with Dr. Jon Scaffidi at Miami University Ohio through Project TIMU.  We were working with a Raman Spectrometer and having a terrible week. We could not get the machine to work and I was getting frustrated. Dr. Scaffidi was as calm as ever. Nothing seem to phase him. He pulled me aside and essentially said, don’t worry. This is science. If it were easy and simple, it would have been done already. Trust the process and keep working. He was right. As it turned out a quarter inch washer had been placed incorrectly in a small part of the machine and it prevented a quarter of a million dollar machine from working. But he did get it to work. Inquiry gives students a mini taste of this. Yes, it is difficult and sometimes “messy”. But that is O.K. We, as teachers, can see that life is sometimes like this and we care enough about our students that we want to try to prepare them for careers and problems that we can’t even imagine….because we believe that good education can empower people to go further and reach higher than they could ever dream….and maybe the journey we will  start together begins with a simple question in which the answer may not seem immediately obvious...and that is O.K….

I am currently working on the 'Nail Lab' in my general chemistry class and wanted to reflect on my efforts to transition this lab into a student-facilitated lab as well. I'll let you know how it goes.