Many physical models with varying degrees of sophistication are used to illustrate chemical concepts.1,2 Simple, less expensive models might be able to be more widely used than more expensive models. Egg cartons are inexpensive and have regular arrays of depressions or dimples. In addition to eggs, these dimples can hold and spatially organize other objects or even contain chemical reactions.3 In the models described below, egg cartons can be cut into trays to represent atoms or to represent energy levels associated with atomic orbitals. Small, inexpensive objects such as milk jug caps4 or plastic Easter eggs, representing electrons, can be spatially arranged throughout the egg carton dimples.

One set of models can be used to illustrate the octet rule and chemical bonding. Here, tray-like sections of egg cartons represent atoms, and objects such as milk caps that go into their dimples can represent valence electrons. The egg cartons can be cut into trays with two dimples to represent positions for two possible valence electrons in each 1s orbital of hydrogen and helium. Figure 1 shows models of individual hydrogen atoms with one valence electron represented by a milk cap in one of two dimples. Multiple egg carton sections and their milk caps can also be combined to represent covalent bonding. To do so, the total number of milk caps involved must be added up. This is similar to the way one can draw a Lewis structure by first totaling up the number of valence electrons in the structure. The number of dimples in the model must match the total number of milk caps in the model. To do this, the trays representing the atoms can be stacked over each other to create the correct total number of dimples. Caps placed into unstacked dimples represent nonbonding electrons; whereas caps placed into stacked dimples represent bonding electrons. Consider the model of the hydrogen molecule in Figure 1. Each hydrogen atom that combines into a diatomic molecule contributes one valence electron, giving two electrons that must be distributed throughout the molecule. To get two dimples in the molecular model, one two-dimple tray is placed over another two-dimple tray, and the two caps are placed in the dimples to represent two bonding electrons. 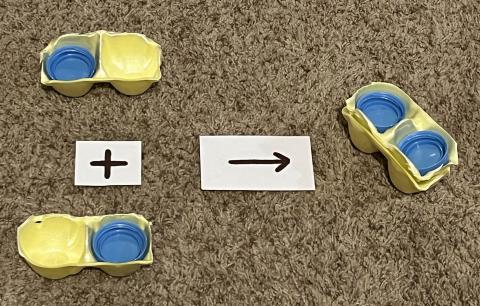 The egg cartons can also be cut into trays with eight dimples (four dimples by two dimples) to represent positions for eight possible valence electrons in main group atoms. Figure 2 shows models of individual oxygen atoms with six valence electrons represented by six milk caps distributed into eight dimples. Consider the model of a singlet oxygen molecules in Figure 2. Each oxygen atom that combines into a diatomic molecule contributes six valence electrons, giving twelve electrons that must be distributed throughout the molecule. To get twelve dimples in the molecular model, four of the dimples from one eight-dimple tray are placed over four of the dimples from another eight-dimple tray, and the twelve caps are placed in the dimples to represent four bonding electrons and eight nonbonding electrons. 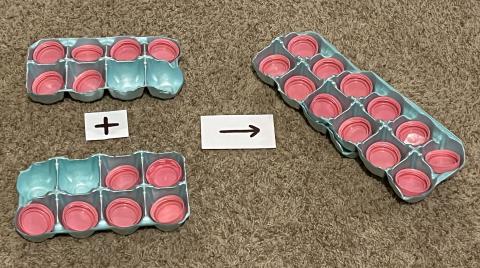 These ideas are extended still further with the models of water molecules shown in Figure 3. Each hydrogen atom contributes one valence electron and each oxygen contributes six valence electrons, giving eight electrons that must be distributed throughout the molecule. To get eight dimples in the molecular model, two two-dimple trays are placed over an eight-dimple tray, and the eight caps are placed in the dimples to represent four bonding electrons and four nonbonding electrons. The pink caps represent electrons contributed from oxygen, and the blue caps represent electrons contributed from hydrogen. The molecular models in Figure 3 represent reactants and products in the important reaction:   2 H2 + O2 → 2 H2O.  For example, this reaction plays a critical role in space applications.5,6

Another set of models can be used to illustrate electron configurations in energy levels associated with atomic orbitals. Figure 4 shows a tray made from an egg crate with three tiers of dimples. The tray represents electron shell 3 of an atom, with each tier representing a subshell and each dimple representing an atomic orbital. Electrons are represented by milk caps. Some of the orbitals have pairs of caps of different colors, representing pairs of electrons with opposite spins. Other orbitals have only one cap, representing unpaired electrons. This orbital diagram model represents the 3s, 3p, and 3d subshells for an iron atom. 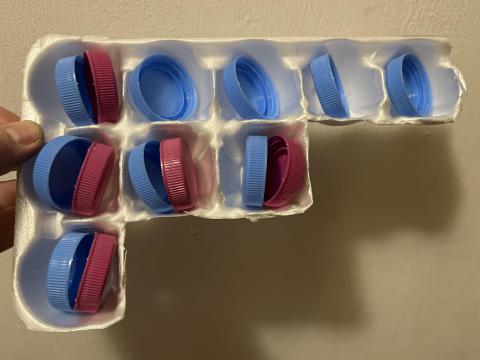 Since egg cartons are used for these models, why not use eggs in the dimples? Figure 5 (left) shows a model of a water molecule similar to those shown in Figure 3, only this time cardboard egg cartons were used to make the two-dimple and eight-dimple trays. Cardboard cartons are not as colorful, but they are likely to be a bit more environmentally friendly. Yellow plastic Easter eggs represent electrons contributed from the oxygen atom, and green plastic Easter eggs represent electrons contributed from the hydrogen atoms. Here each entire egg represents an electron, but many plastic Easter eggs can be split into two parts. Therefore, the models can be modified so that each HALF of a plastic Easter egg can be used to represent an electron. Figure 5 (middle) shows a more extensive orbital diagram model for an iron atom than was shown in Figure 4. Here two cardboard egg carton trays are needed to make the model. Each half of an egg represents an electron, so a complete egg represents an electron pair. If enough eggs of the right colors can be acquired, the bottom halves of the eggs representing one electron spin state can be one color and the other halves of the eggs representing the other electron spin state can be a different color. Figure 5 (right) shows an orbital diagram model for shell 2 of a carbon atom. The bottom halves of the eggs are yellow and the top halves are blue. The Preview Image for the post shows a similar model with the plastic eggs split vertically.

There are likely other examples similar to those presented here that can be put forward. These models have not yet been rigorously tested in a classroom setting, so we seek your input as to their utility and possible ways to improve them.

Safety - Wash your hands before and after using models that others might also be using.

Acknowledgements - Thanks to Deanna Cullen,Tom Kuntzleman, and Kristen Drury for helpful suggestions. This work was supported by Bradley University and the Mund-Lagowski Department of Chemistry and Biochemistry with additional support from the Illinois Heartland Section of the American Chemical Society. The material contained in this document is based upon work supported by a National Aeronautics and Space Administration (NASA) grant or cooperative agreement. Any opinions, findings, conclusions, or recommendations expressed in this material are those of the author and do not necessarily reflect the views of NASA. This work was supported through a NASA grant awarded to the Illinois/NASA Space Grant Consortium.