Holding Fire in the Palm of Your Hand 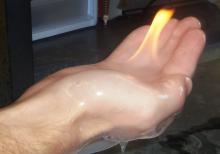 Some students of mine and I have published two papers1,2 in the Journal of Chemical Education that describe how stunt people use chemistry to safely set themselves ablaze while filming action movie scenes. The secret behind this stunt lies in the use of superabsorbent polymer (SAP) gels. To pull off this trick, a stunt person coats a portion of their body with an SAP gel, then applies fuel on top of the gel. When the scene is ready to be filmed, the fuel is ignited. As the fuel burns, the energy released does not go into the stunt person’s body. Rather, the energy released is absorbed by the large amount of water (a great insulator) contained in the SAP gel. One experiment described in the articles1,2 compares hot dogs burned with and without a protective SAP-gel coating. In addition to the hot dog experiment, I have developed a demonstration wherein I perform this stunt on myself. I have safely “lit my hand on fire” dozens of times in various chemistry demonstration shows and even during General Chemistry lectures. It should be noted that in the demonstration I perform, I do not try to generate a huge flame such as seen in many stunts. I only hold a small flame in the palm of my hand (Figure 1). I’m a chemist, not a stunt person, after all! Nevertheless, the demonstration has always been well received and generates a considerable amount of interest. Even so, this experiment is certainly one “you should not try at home”, and as a result, I am always a bit apprehensive performing it.

Figure 1: Holding fire in my hand

I have considered performing this experiment during the Demo Extravaganza at BCCE next summer at Grand Valley State University. However, upon discussion of the pros and cons of conducting such a demonstration with colleagues, I wonder if doing so would be such a good idea. One of the biggest problems of this experiment is that it can be completely conducted with materials found in the home. It really is that easy to do. As one colleague noted, “The [experiment] enables the casual observer to readily obtain and create the ingredients for the demonstration. It is great to show experienced demonstrators how to more readily obtain the required ingredients, but…allow(ing) all interested parties to readily obtain the ingredients and perform the demonstration [has] possible dire consequences.”

I’m interested to hear what some of you think about this demonstration. Should I perform this experiment for public audiences and/or my General Chemistry students? Should I explain to other chemistry teachers how to do this experiment? I would value hearing your opinions.

My Heart Beats for Chemistry