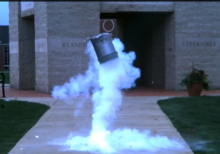 By Tom Kuntzleman and Randy Wildman

The “bucket launch” is a fantastic experiment you can do if you have access to liquid nitrogen.  See the video below:

Depending upon conditions, we have observed the bucket to launch anywhere from 80 to 160 feet high.  For reference, the clock tower you see in the video is 80 feet tall.

To conduct this experiment, I filled a plastic 2 liter soda bottle about one-third full with liquid nitrogen and sealed the bottle.  The sealed bottle was then placed upright in a pan of room temperature water that was placed on a hard surface.  After placing a 5-gallon plastic pail over the soda bottle and pan of water, I quickly moved far away to watch the results (CAUTION:  If you plan on doing this experiment on your own, please read the hazards section at the end of this blog post).

Some of the liquid nitrogen in the bottle vaporized as it gained energy from the water.  This caused the pressure in the bottle to go up as a result of the buildup of nitrogen gas.  The pressure increased to the point where the bottle could no longer contain the gas, and the bottle exploded.  (Several online reports indicate that soda bottles fail under pressures of about 10 atmospheres1).  The energy released in the explosion was sufficient to launch the 5 gallon pail high into the air.

The experiment presents a rich assortment of quantitative analysis possibilities because so many of the conditions inside the bottle just before it bursts are known or are able to be inferred. The pressure is the bursting point of the bottle, the temperature is the boiling point of the liquid nitrogen at the bursting pressure, and the volume is 2 liters minus the liquid volume. In fact, the only parameter we do not know is n, the amount of liquid nitrogen that has vaporized. (It was a fellow ChemEdX user, Roy Jensen, who pointed out that this parameter, n, needs to be calculated or determined, correcting an error I made in a previous description of this experiment). At the very least, the system gives us a great opportunity to test the ideal gas law, which is done below. Also, the system poses interesting questions. One question is just how much energy is released from the expansion of the cold, compressed nitrogen vapor, and how does it compare to the energy needed to lift the bucket so spectacularly? I, along with another ChemEdX user, Randy Wildman, give a rough calculation of this as well.  The calculations are arranged according to student/class level.

If you have any suggestions for improvements to the following analysis, we’d love to hear from you.  There are still several questions we are wondering about regarding this experiment.

where P is pressure, V is volume, n is moles of gas, R is the gas constant

(0.0821 L atm mol-1 K-1) and T is temperature.  Equation 1 can be used to estimate the number of moles of gas contained in the pop bottle just prior to explosion.  To do so, we need to estimate P, V and T just prior to explosion.  Based on the online reports of the pressure required to cause the bottle to explode, we set P = 10 atm.  To estimate the temperature, we examine the vapor pressure curve for nitrogen (a good one can be found here).

From the vapor pressure curve, it can be seen that nitrogen boils at about 105 K at a pressure of 10 atm.  Because the 2 L bottle is one-third full of liquid nitrogen, we can roughly estimate that 1.33 L of headspace is left over for gas buildup.  Insertion of these values of P, V and T into Equation 1 yields an estimate of 1.54 moles of nitrogen gas buildup prior to explosion.

For students of general chemistry, a slightly more rigorous analysis may be conducted to yield a better estimate for the gas volume.  This is done by considering that the gas volume inside the pop bottle increases in volume as the liquid nitrogen evaporates to form gaseous nitrogen (Figure 1).

Therefore, a better estimate of the gas volume in the headspace is:

Substitution of the appropriate values into Equation 4 allows for the estimate that 1.62 moles (compared to 1.54 moles in the simple analysis) of gas build up in the bottle just prior to explosion.  Using 1.62 moles, it can be noted (Equation 2) that the gas volume increases from 1.33 L to 1.40 L during the expansion.

We can take this analysis a bit further.  Recall that the ideal gas law (Equation 1) assumes that gas molecules neither attract nor repel one another.  Furthermore, the ideal gas law assumes that gas molecules do not have volume.  These are not good assumptions when gases are at low temperature and high pressure.  However, in this experiment, the pressure is quite high and the temperature is quite low!  To account for deviations from ideality, a correction factor called the compressibility factor (Z) is added to the ideal gas law:

Values of Z have been tabulated for nitrogen at several temperatures and pressures2.  Values of Z for any specific temperature and pressure can be interpolated from the tabulated values; Z = 0.792 at its boiling point 10 atm pressure3.  Substitution of Equation 2 into Equation 5 yields:

Insertion of appropriate values into Equation 7 yields n = 2.08 moles of gas buildup.  This substantial increase from the ideal gas analysis indicates that the nitrogen gas is not behaving ideally prior to explosion.

The van der Waals equation of state (Equation 8) provides a more accurate description of the behavior of gases than the ideal gas law:

Now that we have a good estimate of the number of moles of gas involved in the explosion, we can gain insight into how high the bucket can be launched.  In other words, if nitrogen gas trapped inside a pop bottle at 10 atm suddenly explodes, how high can the bucket be launched if all of the energy from the explosion goes into launching the bucket?

The work (w) done by the gas on exploding can be calculated as pressure – volume (or P-V) work, which expressed in its differential form is:

Assuming ideal conditions throughout the expansion:

We can assume that n and T remain constant throughout the explosion.  This might seem odd, given that rapidly expanding gases usually cool upon expansion and the temperature would thus be expected to drop.  But in this case, the gas is quite near its condensation point. So it is likely that once a small portion of the gas cools upon expansion, that portion would condense.  Upon condensing, the small portion would release energy as heat to the surrounding gas.  This could possibly keep the temperature constant in the surrounding gas.  If gas is condensing, then it might seem inadvisable to assume that n (the moles of gas) is constant throughout the process.  However, because the heat of vaporization of nitrogen (3500 J mol-1) is so much bigger than the heat capacity of gaseous nitrogen (23 J mol-1 K-1), not much gas needs to condense in order to provide enough energy to maintain the temperature throughout expansion.  The simplifying assumptions of constant temperature and moles are by no means perfect, but they aren’t outlandish, either.  Using these assumptions, we can integrate both sides of Equation 11 as follows:

Does this result make sense?  Well, the energy, E,  gained by a bucket of mass, m, launched to a height, h is:

HAZARDS:  I describe here some useful tips if you plan on trying this experiment yourself.  Please know that all details required for a safe and successful launch have NOT been described herein.  If you try this experiment, you do so at your own risk.  The bucket needs to be liberally reinforced with duct tape.  Otherwise, the impact from the explosion will not launch the bucket in the air.  Rather, the bucket will shatter into many pieces.  After tightly sealing the bottle, STAND BACK.  Pieces of plastic from the exploded 2 L bottle can be thrown as far as 30 m.  If the bottle is not sealed properly, hissing noises can be heard as gas escapes from the bottle.  In the event the bottle is not sealed properly, DO NOT approach the assembly until you are certain that all of the gas has escaped.

3.  http://www.peacesoftware.de/einigewerte/stickstoff_e.html  (When using this site, be certain to use the calculator designated for nitrogen in the saturated state).