That’s What Scientists Do!

As I began to prepare my labs for this upcoming year, I decided to put a bit of a twist on a previous density of a block lab I had used in the past entitled the Measurement Challenge that is sold by Flinn Scientific. This lab requires the students to determine the volume of different size blocks that are made of different materials and then either determine the density of the block by obtaining its mass after measuring and calculating its volume. It can also be used to find the mass of a block given the materials density and requiring students to measure and calculate the blocks volume. According to the lab handout, it covers the concepts of significant figures, density, volume, mass, and measurement. Other topics include percent error, accuracy and precision, and true or accepted values.

As mentioned earlier, I wanted to change things up just to keep things interesting. I wanted to show the importance of using significant figures and appropriate measuring devices. So, I handed each of my four-student lab groups four blocks of different volumes but still made of the same material. Then I asked them this question:

Do these blocks made of the same material, but different measurements, have the same density?"

After some class discussion, my students decided that yes, the density did not depend on the size of the sample. I mentioned that density is indeed an intensive property meaning that it is a physical property of a system that does not depend on the system size or the amount of material in the system. My students recognized that mass and volume did depend on the sample size but gave the reasoning that because density was a ratio between the two that it remained constant. So now that we knew the density was to be the same, in other words, the claim had been made, I simply asked my students to prove it! Meaning go ahead and collect the data discussed in the Measurement Challenge activity as evidence to support the claim that was just made.

When the students finished gathering data, I asked them to present their findings to the rest of the class using large whiteboards. As the students began to present, I explained to them that I was likely going to point out a few things that would help them improve their presentation skills. Many of the groups did not introduce themselves as they started their presentation. Many of the groups neglected to state the purpose behind the data that they had collected. These issues were pointed out to the first groups in each of my classes and the presentations improved as each class progressed through the groups. However, what I found most interesting was that after considering their data, many of the groups stated that the density of the blocks made of the same material was not the same! They had recognized that the density of the four blocks they had considered in the prelab had been identical. You can see the results of the student's data in the sample boards shown. Some values had a large difference in density while other density values were closer together. 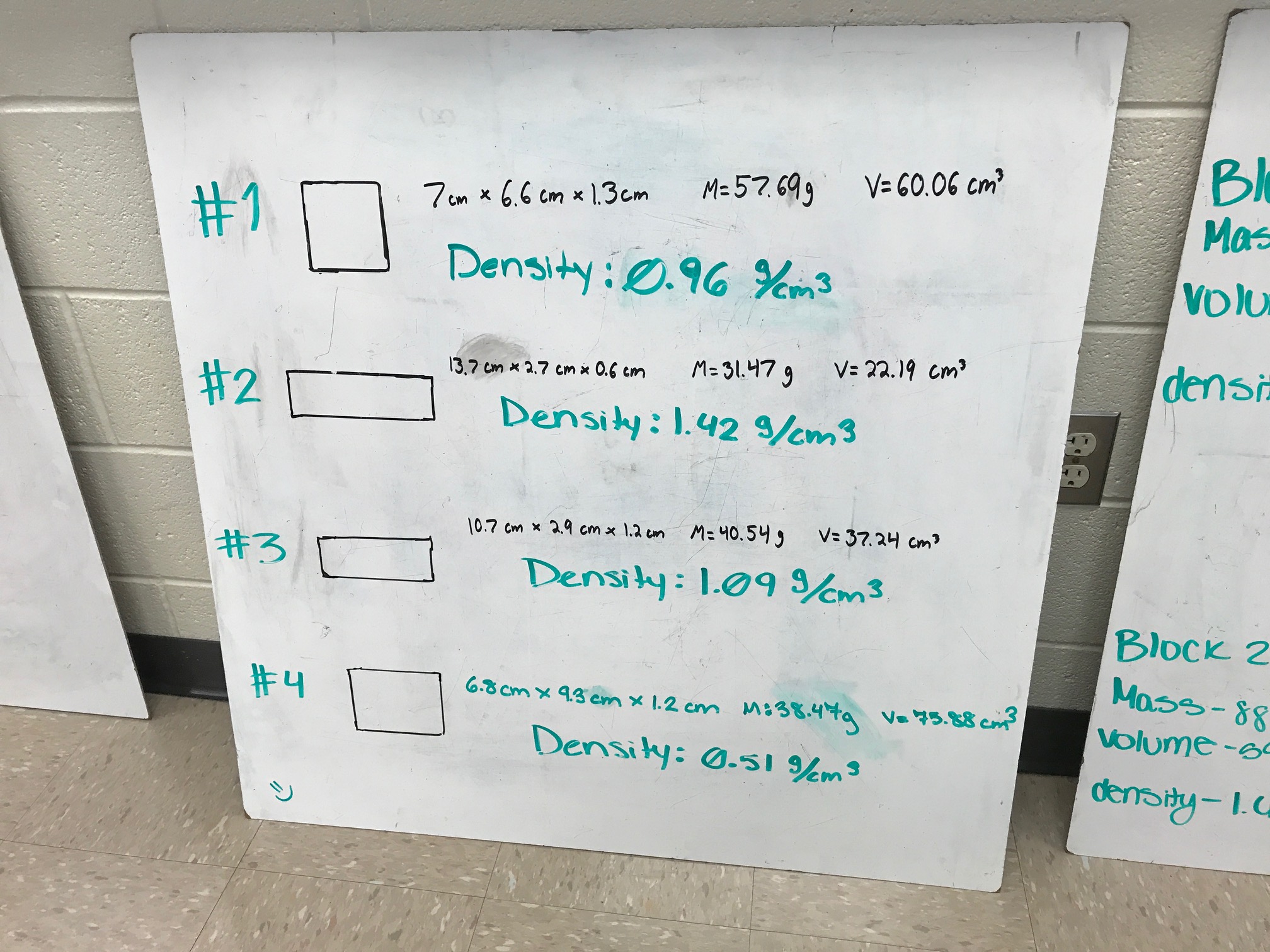 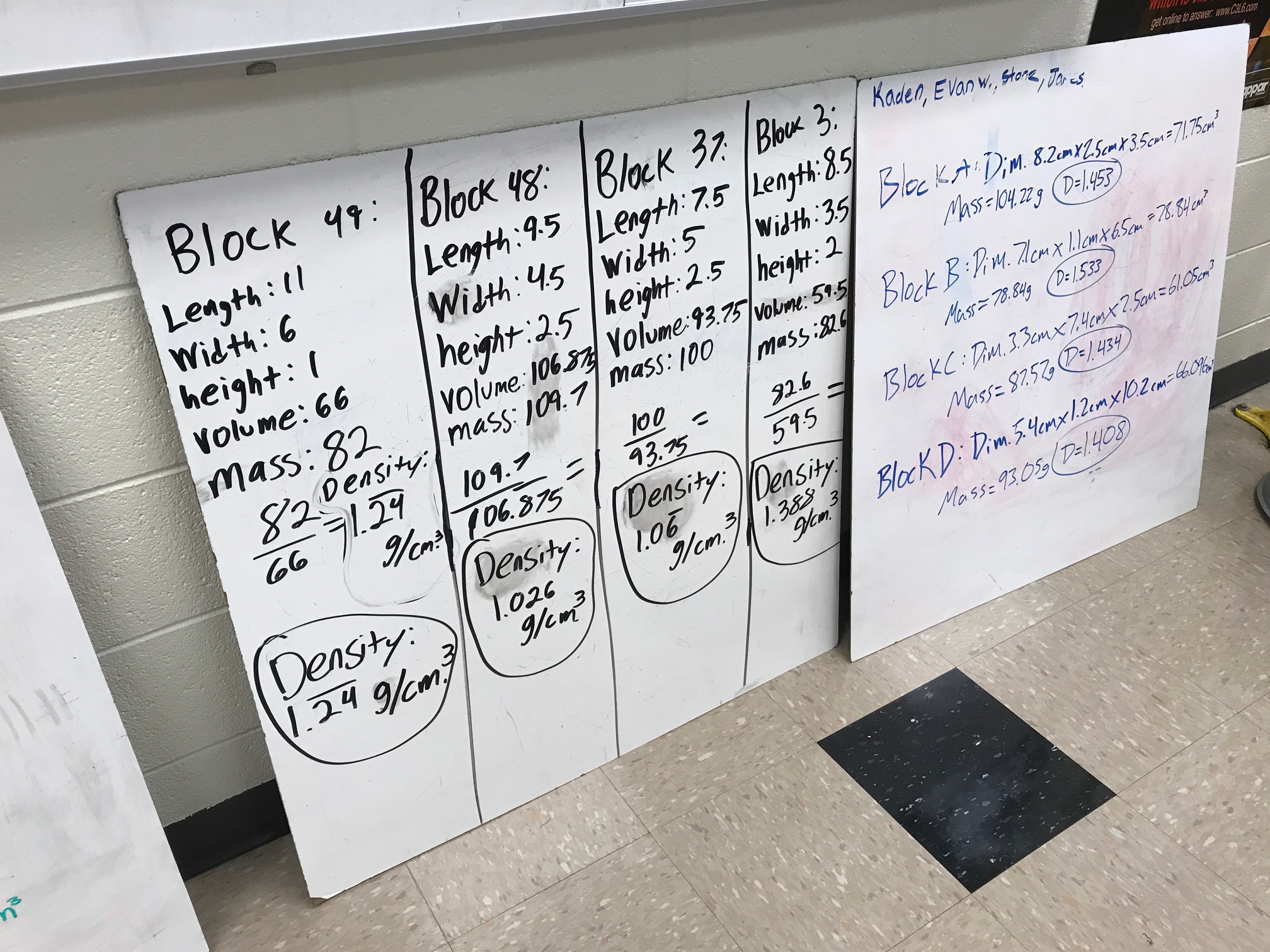 Of the majority though, the theme that the density was not the same amongst the same types of blocks was mentioned several times. As we further discussed why this may have happened the students began to see that they may have estimated their measurements and that they were in their opinion “rough measurements”. This led to a great discussion that the technique they used to collect their data was not that good. I then asked the following questions:

"Did your group have more than one person take measurements of the same pieces?"

"Did you double check your data and results with another lab group using the same types of blocks?"

"Did you have more than one person complete the calculation solving for density to double check the answer?"

Many of the groups simply stated that it never occurred to them to have their work double-checked by their lab partners or to have other lab groups check their findings. Of course, this prompted a few more questions from me.

"Do you think that was wise?"

"Do you think that is what scientists do?"

"I then asked the students if they thought that their data could have been improved if they had another member of their lab group check their measurements.

Many of the groups decided that double checking measurements, calculations and results would be good ideas. They also felt that this is indeed what scientists do. Students recognized that scientists probably check the work of other scientists and also have their own work evaluated and checked at times. This may occur when presenting their work at conferences, at lectures or before their research gets published.

And then this happened in one of my classes! 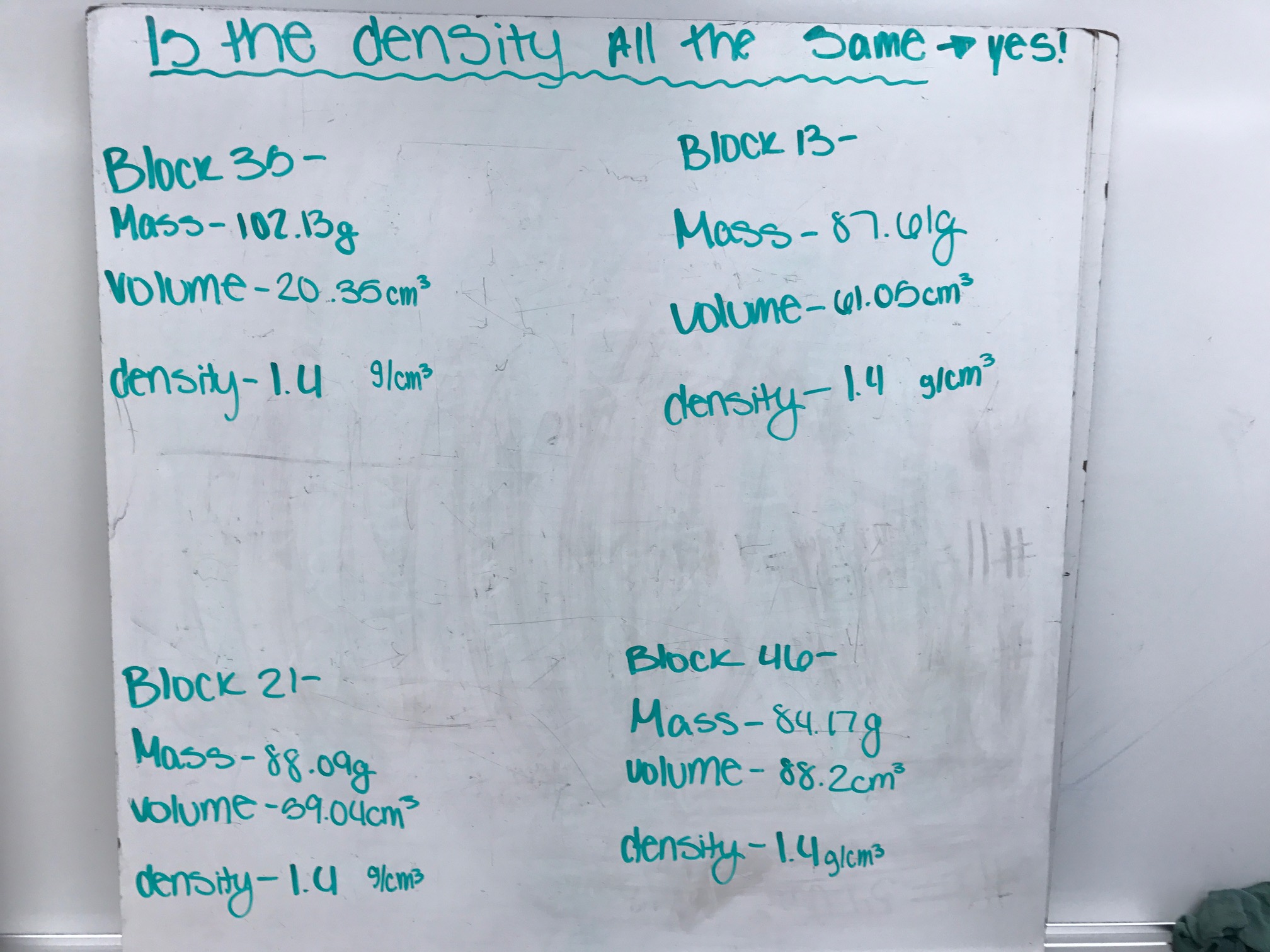 Note that the density listed in the board above is all the same and before I could even get a better look at it I had a student exclaim, "Wait, that math doesn’t work! Wow, I feel like a scientist, I just corrected their data!"

Now I don’t know the intentions of this particular group that decided to alter their density calculations to match their claim that the density should be the same. I was too busy grabbing my camera before their board got erased. I knew I had to share this. This activity led to great class discussion and I hope this practice continues throughout the remainder of their lab experiences.

"Wait, that math doesn’t work! Wow, I feel like a scientist, I just corrected their data!"

In this activity, we were calculating the density of the blocks. Later in the unit, we discussed significant figures, how to measure to the first digit of uncertainty, and how to calculate with significant figures. After that, students were given a lab practical. I gave each student their own block and asked them to determine the mass of the block given its density. I was very pleased to say that what I witnessed was awesome. Students measured to the correct number of significant figures. Calculations were done correctly. Students had other group members check their measurements, calculations, and significant figures (which I allowed). Several students got less than 1% error on determining their blocks mass! 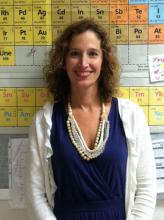 I have done this Flinn lab for many years, but I love this twist you put on the standard procedure. It leads to much richer discussion than what my students have had in the past. I'm going to try your version next year. Thanks for sharing!