Turmeric is known to contain curcumin (Figure 1), a bright yellow compound. Curcumin is an acid-base indicator.1,2 At or below pH 8 curcumin is fairly non-polar so it does not dissolve well in water (Figure 1, upper structure). Around this pH curcumin also has a yellow color, and emits yellow-green fluorescence. Above pH 8 curcumin loses a proton and gains a negative charge, allowing the resulting ion to dissolve well in water due to ion-dipole attraction (Figure 1, middle structure). This change also causes a loss of fluorescence and a color change to orange-red.1 At even higher pH, the phenolic protons are lost, 1,2 which causes curcumin to be even more negatively charged (Figure 1, bottom structure). The loss of protons causes yet another color change. 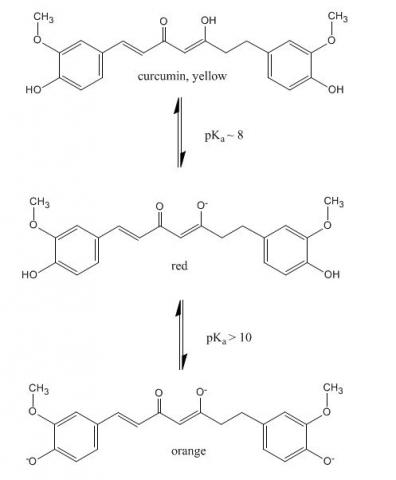 Figure 1: Chemical structure of curcumin at pH < 8 (top) around pH 8 (middle) and pH > 10 (bottom). Curcumin is the main colorant in turmeric powder.

Interestingly, curcumin binds to borates to form rosocyanine, a red colored complex (Figure 2).3 The rose-red color of this complex allows for a sensitive test for the presence of borates through addition of solutions of curcumin. 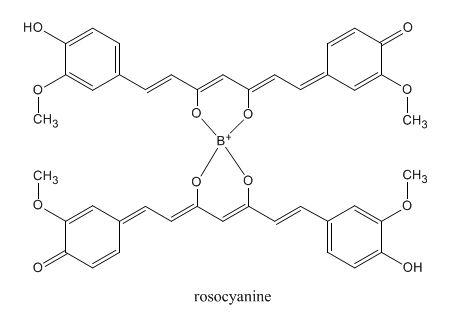 When experimenting with the Sunflower dye, I found it did not dissolve well in water, but it did dissolve well in acetone and alcohols. These observations are consistent with the presence of curcumin in the dye. When illuminated with a violet laser or UV light, a solution of the Sunflower dye in acetone or alcohol emitted yellow-green fluorescence, further indicating the presence of curcumin. Also, the Sunflower colorant acted as an acid-base indicator: yellow in acid and red in base. Finally, an alcoholic solution of the Sunflower colorant changed to rose-colored upon addition of borates. All of these observations all point to the dye containing curcumin. In the video below you can see several investigations that can be performed with the Sunflower colorant that make use of the curcumin found in this food coloring.

In contrast to the other Color from Nature dyes, the Sunflower dye contains not one but two components responsible for its color. “Annatto extracts” is also listed in the ingredients for the Sunflower dye. The main coloring component in annatto extract is bixin, which is converted to norbixin under alkali conditions4 (Figure 3). Norbixin fluoresces, giving off orange light.5 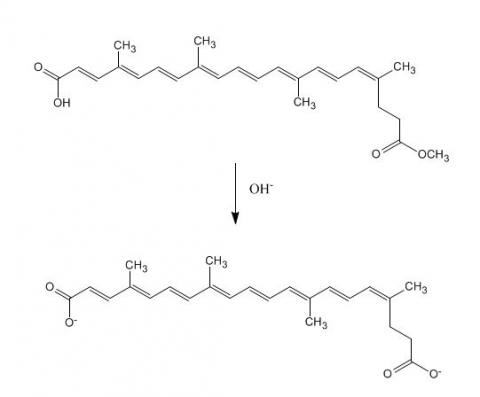 After addition of base to a solution of the Sunflower dye (acetone as solvent), the resulting solution was observed to fluoresce orange upon illumination with UV/violet light. You can see this experiment at the end of the video posted above. This test suggests that the compound bixin is contained in the Sunflower dye. The orange fluorescence observed at high pH is consistent with the formation of norbixin, even though I am not completely convinced this is what is going on. 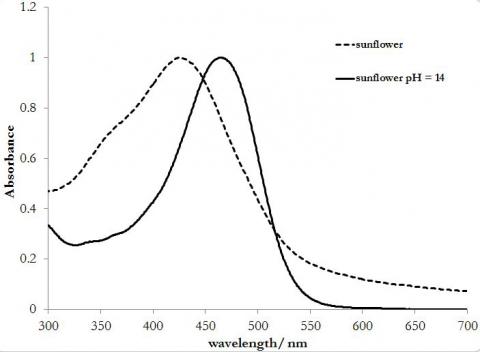 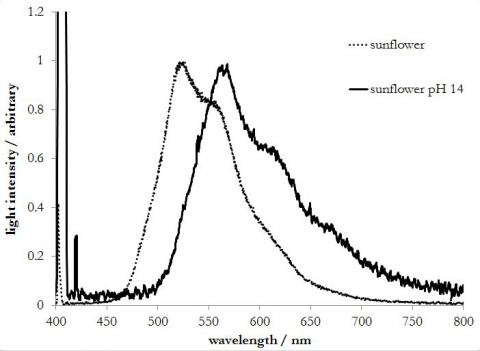 I hope you enjoyed this series on the chemistry of the various colorants found in McCormick’s Color from Nature food colors. Be sure to pick up a packet at your local grocery or retail store and do some experiments. If you learn something new about the chemistry of these dyes, be sure to share it with us in the comments. I look forward to hearing from you.